Today I am looking at Sly 2: Band of Thieves. It was one of my very first Playstation 2 games, and on beating it again, it is still fun to me even after all these years. The story picks up after the first game- I had not played it, but the first level does a great job of acquainting the player with our main characters, Sly, Bentley, and Murray, as they are raiding a museum to find something called the “Clockwerk Parts”.

We see their individual strengths as Sly, who we directly control, slips through security and runs on a tightrope, Murray uses his amazing strength to crash through a ceiling and lift a massive iron gate for Sly to pass through, and Bentley uses his technical wizardry to turn off various security measures and hack into the loudspeaker to trick the guards into thinking everything is normal. Unfortunately, we also get our main conflict here too- they were too late. The parts were already taken by a group called the Claww Gang for their own purposes, and the cops, Agents Carmelita and Neyla specifically, were waiting to capture the Cooper Gang as they arrived late. This stake-out didn’t work as planned for the cops, but it did give Sly all the information he needed to stop looking for the missing parts.

It is then that the game truly begins, and we get a short movie explaining Sly’s past, and the events of the first game. His parents were slain by an evil mechanical owl named Clockwerk, who hated the Cooper family line so much that he replaced his entire body with machinery just so he could stalk them through the centuries and destroy them. Orphaned, Sly eventually befriended Murray and Bentley, who helped him finish off Clockwerk once and for all- or so it seemed. If his parts were in the hands of this Claww Gang, not only would they put the evil owl’s indestructible metal parts to evil purposes, but they could bring Clockwerk back to life.

And so, the game starts properly in Paris, where they have tracked one of the parts to the nightclub owner Dmitri, where he is using the tail feathers as an inexhaustible printing press that never needs to be replaced. Now you have the city itself to run around in as all three characters, completing missions to set up the gang’s grand heist and simply running around collecting money and items. 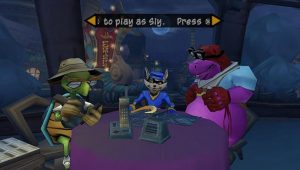 Well, perhaps not so much ‘collecting’ as stealing. Sly in particular can use his cane to pickpocket guards if he is behind them, taking their money and, if you see their pockets glowing, an item that can be sold as well. Simply defeating the enemy will also net you some money, but not all of it. This money can then be spent at the hideout on upgrades for the various characters, like the Smoke Bomb for Sly, so he can throw enemies off his trail and make a getaway if he has been spotted.

Sly is also definitely the most agile of the three, capable of climbing lamp posts and pipes, crawling along thin walls, and jumping on spires. This makes him by far the most capable of exploring the map, and finding all the hidden goodies. In particular, there are various treasures that only he can collect- once found, you have to take them back to the hideout without getting hit, or it will be destroyed. Don’t worry- you can try again, but you’ll have to go back to where you found it. 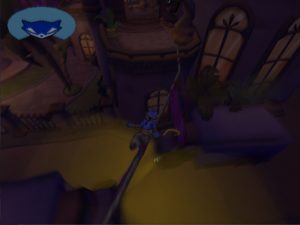 Murray is the strongest of the three, but also the largest. He cannot hide under tables, but then he can also knock a normal guard unconscious with one punch, and pick up them or any other object and toss it for a longer ranged attack. He can also use his ‘Thunder Flop’ to slam down on a group of enemies and send them sprawling. He and Sly both can do a special take down move- knock the enemy into the air, then slam them down for Sly. Unlike Sly though, Murray can pull this off even if the enemy knows he is there- he simply doesn’t need the element of surprise.

Bentley is less capable in combat than the others, but he avoids it by having an unlimited supply of bombs and a crossbow loaded with sleep darts. In first person view he can shoot and knock out a guard, and drop bombs on them as he gets close to finish them off. The bombs will also harm and knock away normal enemies too. Given he is the planner, he tends to have less missions than the other two, but there are still quite a few, especially in the later parts of the game.

The world you run around in is littered with missions to undertake, but also with bottles. Thirty are scattered through every chapter of the game, and finding them all will reveal the location of a safe, hidden in one of the indoors areas. Once you read the safe, Bentley will reveal the code, and you get a new power up for Sly. As you might expect, finding these bottles isn’t an easy task, but it is helped that they make a very noticeable noise when you get close, so you’ll always know if you’re near one.

The main issue is reaching them. I believe Sly should be able to get all of them himself, but I do recall Bentley in particular can get a hover pack as a late game power up, which may be helpful in getting some. Oh, and be careful when you grab them. They shatter on contact, which will attract the attention of nearby guards, much like breaking anything else.

Generally the levels go through three distinct phases. First will be a Sly mission where he sneaks into an indoor area and takes reconnaissance photos. This helps establish what is going on, and Bentley uses the photos to help work out his plan of action. The second phase will have several missions for all three characters, helping to bring the plan to fruition. For instance, in the first level Bentley infiltrates Dmitri’s nightclub to destroy some structural supports, and Murray has to smash the club’s water supply, and so on. 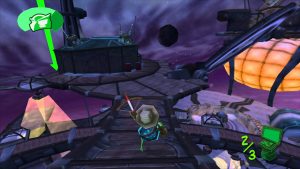 Once these missions are done, Bentley will reveal what it all has been leading up to, one final mission that pools all their talents together to raid the enemy’s hideout and snatch the Clockwerk part, making use of the various set ups the previous missions created. I won’t reveal any of these plans though- they’re simply too impressive and creative to spoil.

All in all, I greatly enjoyed Sly 2. The open world set up really shows off Sly’s capabilities as a thief, and shows the strengths of his friends as you play as them too, slowly but steadily undermining the game’s criminal bosses before they topple their operations like a house of cards. It was endless fun to play, with my only real regret being that once it is done, it is done. Beaten 100%, with nothing else to do. But even so, it is a great experience, and one I am sure anyone would enjoy.