It’s been a long, hard road for Scorn. The interactive flesh nightmare has been in production in one way or another since 2013, when the Serbia-based development studio Ebb Software was founded. In the intervening nine years, it has gone through a series of delays, false starts, and even a little bit of controversy, all of which have only served to muddy what the game would actually offer its players.

When the game was first revealed in 2014, it wowed the gaming industry with a horrifying, H.R. Geiger-inspired hellscape full of twisted imagery. Interiors made of flesh, machinery made of bone, and a tortured, pained antagonist who is completely silent. Needless to say, it made a pretty solid first impression. Even more impacting was the reveal of combat, which consisted of what seemed like living alien weapons used on the kinds of monsters you wouldn’t even find in your worst nightmares.

Unfortunately, that initial version of the game would not come to be. The footage that was shown was from a pre-alpha version of the game and was used to launch a Kickstarter which was ultimately unsuccessful. When that funding fell through, the project floundered for several months until January 2015, when an unnamed investor gave Ebb Software a cash injection that allowed them to continue work on the project.

Five years and another Kickstarter later, Scorn was unveiled alongside the Xbox Series X as a “launch window” title. But alas, it would go on to be delayed twice more before it would be in gamer’s hands, and a particularly aggravated Creative Director kicked the proverbial hornet’s nest when he suggested to the game’s supporters that they just get their money refunded and buy the game when it’s released rather than contact him endlessly on social media for updates on a game they’ve been waiting on for years.

This is just a condensed series of events that led to the version of Scorn we have now, but you can see that the development process on it was certainly troubled. So, after all of this time and conflict, can we say that Scorn was worth it? Let’s find out in this review of Scorn. 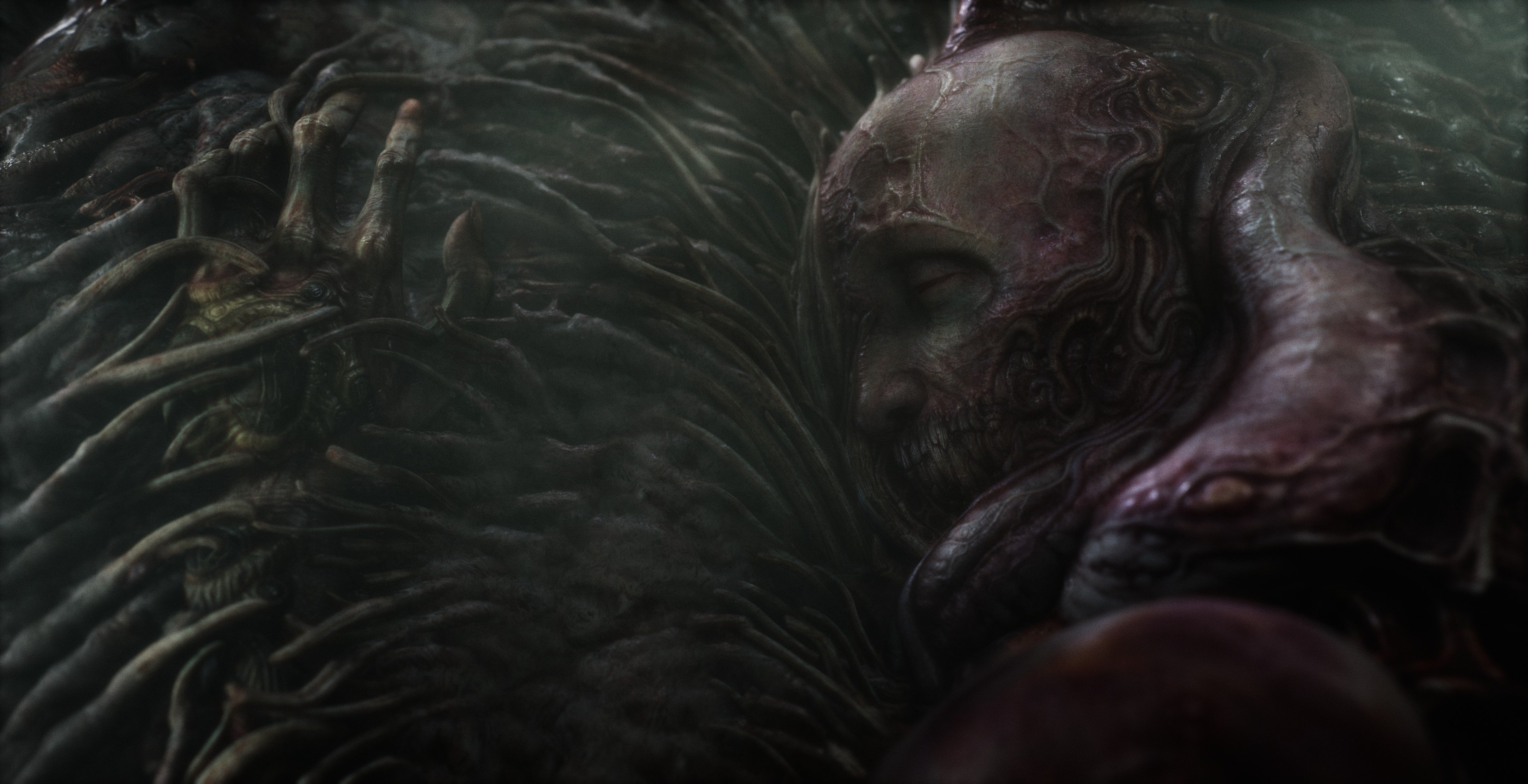 One thing that survived the development process is definitely Scorn’s visual language. Graphics technology improved leaps and bounds between 2014 and 2022, and Scorn definitely kept up. The promise of the skin and bone hellscape has been fully realized, and at least on the Series X (the version of the game this review covers), its resolution appears to be close to 4K.

According to the technical performance gurus at Digital Foundry, Scorn renders at 1440p on Series X and makes use of AMD’s FSR 2 smart upscaling to create an even cleaner image. And, thanks to its Unreal Engine 4 foundation, the textures and surfaces of Scorn’s world are suitably gross looking.

The previously mentioned bone machinery and flesh interiors are fully present and provide plenty of stomach-churning wonder as you make your way through the game. Piles of humanoid bodies made me freeze in my tracks more than once, and interacting with the organic mechanical constructs of the game was particularly unsettling.

As an added bonus, Scorn runs amazingly well. Whether you’re navigating esophagus-like hallways or wandering the sand-swept exterior of the alien torture planet, Scorn runs at a steady clip with minimal slowdown in only a handful of areas. The performance lends itself well to the game’s cinematic presentation. Now, if only the gameplay reached the same level of success. 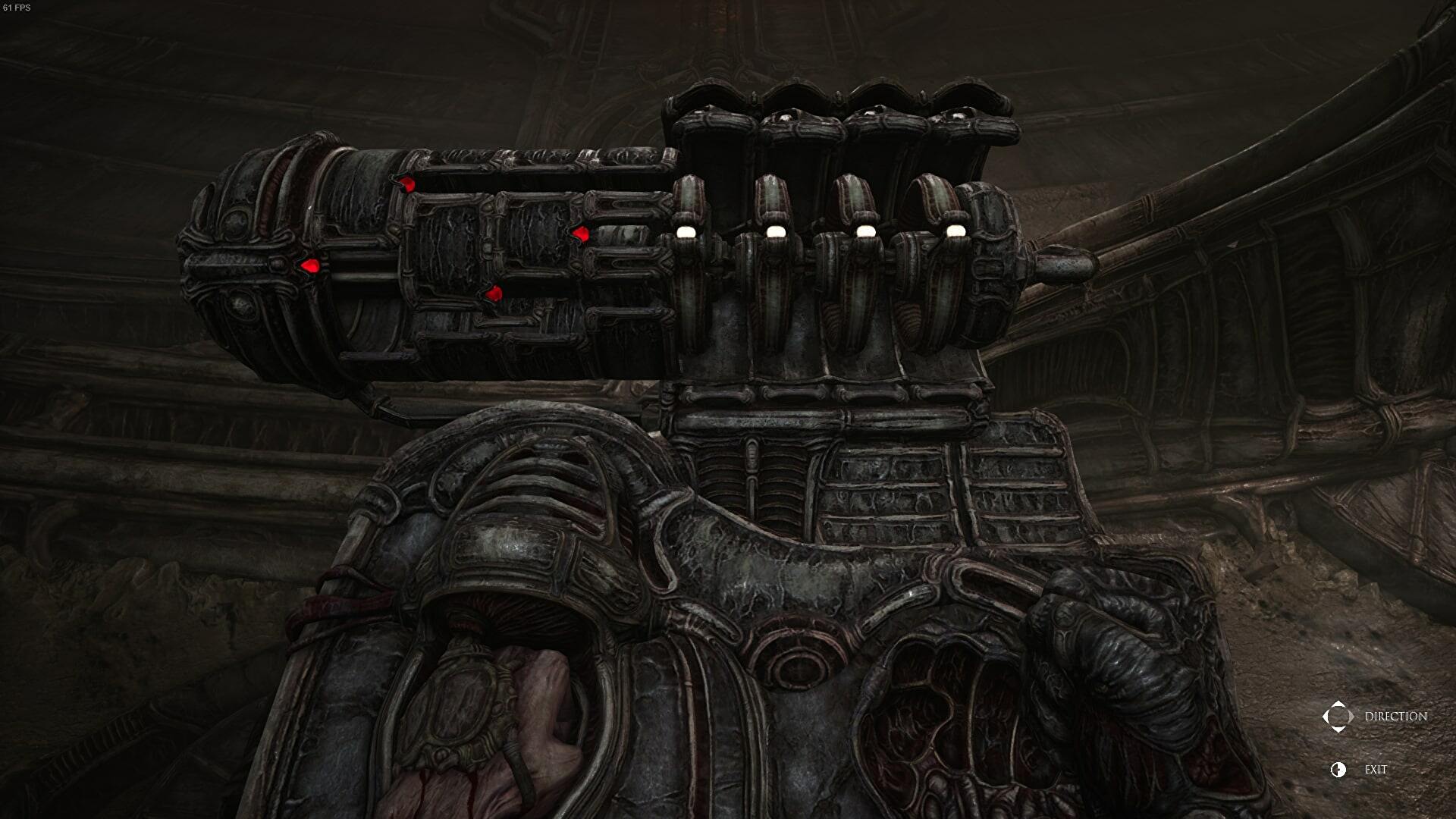 At some point in the decade-long development, the messaging of what Scorn would actually be must have gotten muddied. What was shown of the game in all of its promotional material largely focused on its world, which was the right choice, but it also highlighted the combat that would be in the game.

The organic handle with interchangeable parts that make up the game’s different weapons is in the final game, but the combat in the game is not nearly as important or fun as you might have been hoping. For much of the game’s five hour runtime, you’ll be solving puzzles. Many of these puzzles are quite well designed and clever, but they just aren’t what many people were expecting Scorn to be.

There were many fans who were eagerly awaiting a new survival horror game who were sorely disappointed upon booting up Scorn to be dropped into a world full of puzzles and, perhaps even worse, poor combat.

You won’t be facing many enemies until over halfway through the game, and when you finally start getting into fights you’ll notice that the combat isn’t nearly as fluid or entertaining as many other games. You have a dodge button, but the protagonist moves so slowly that you can rarely avoid taking damage in most situations, especially considering the close quarters of most of the game.

At least there’s a decent variety of enemy creatures, and they are all as well-designed and upsetting as the rest of the game. From the standard “worker” alien with its headbutt rush and acid spit attack, to the tank-like bulls and the several other monsters that are worth keeping a secret, Scorn has its enemies down-pat.

There’s no dialogue in Scorn. Its “story” if you can call it that, is conveyed completely wordlessly and through environmental storytelling. I found this to be unique and refreshing in a world where AAA games hammer their story and themes into players with ham-fisted dialogue and exposition, but it might not be for everyone. Especially if your motive to complete a game is to push forward with its story, you won’t be served well here.

But if you can lock in and go for the ride Scorn has, you might be surprised at the twists and turns it has in store. Some of the events that occur in the game were truly shocking, and I think that the writing and creative team at Ebb Software did a great job creating a narrative that is memorable without a ton of characters and cruft.

When I hit the end credits on Scorn, I was struck with mixed feelings. On one hand, I was part of the group of people who had been excited to play the game from its original announcement in 2014, so maybe my expectations were set a little high. I bought into the hype and was fully expecting a game that wasn’t actually being made, so I was a little disappointed in what I was given with Scorn.

On the other hand, if you separate the game from its checkered past and take it solely as a brand new IP and an original idea from a promising indie studio, then Scorn shines. It definitely still has some mechanical issues, and it doesn’t always feel very good to play, but the game is absolutely jam-packed with great ideas, inspired visual design, and a fighting spirit.

It’s the little indie game that could, against all odds, and I’m glad it finally exists. There’s no doubt that it isn’t perfect, but it’s an incredible first swing by Ebb Software, and I can’t wait to see what they come up with next. Hopefully it won’t take another ten years and a slew of delays to finally hit the market. And with Xbox backing them up, they’ll likely be working on something new in no time at all, especially for Game Pass.

Mobile gaming may have undergone something of a sea change since its inception, but it’s still around and still going strong. Whether it’s the...
Read more
Best Games