Tycoon games aren’t exactly mainstream when considering the genre, in-fact they’re the complete opposite, however, they’re able to bring plenty of excitement to players who enjoy this type of game. With that said, it’s been sometime since we can say that a stunning franchise has set this genre on fire. I’m sure you don’t need to question which series I’m talking about either – yes, I’m referring to Rollercoaster Tycoon, which was originally developed by Chris Sawyer and released back in 1999.

The real question many are asking is; will Planet Coaster be another title that looks set to deliver, but doesn’t, or will this actually be the real deal? Of course, we are now in a good position to help answer this question thanks to the fact that we have access to the Alpha. This preview will also take into account what the close rival, Rollercoaster Tycoon World, has to offer. 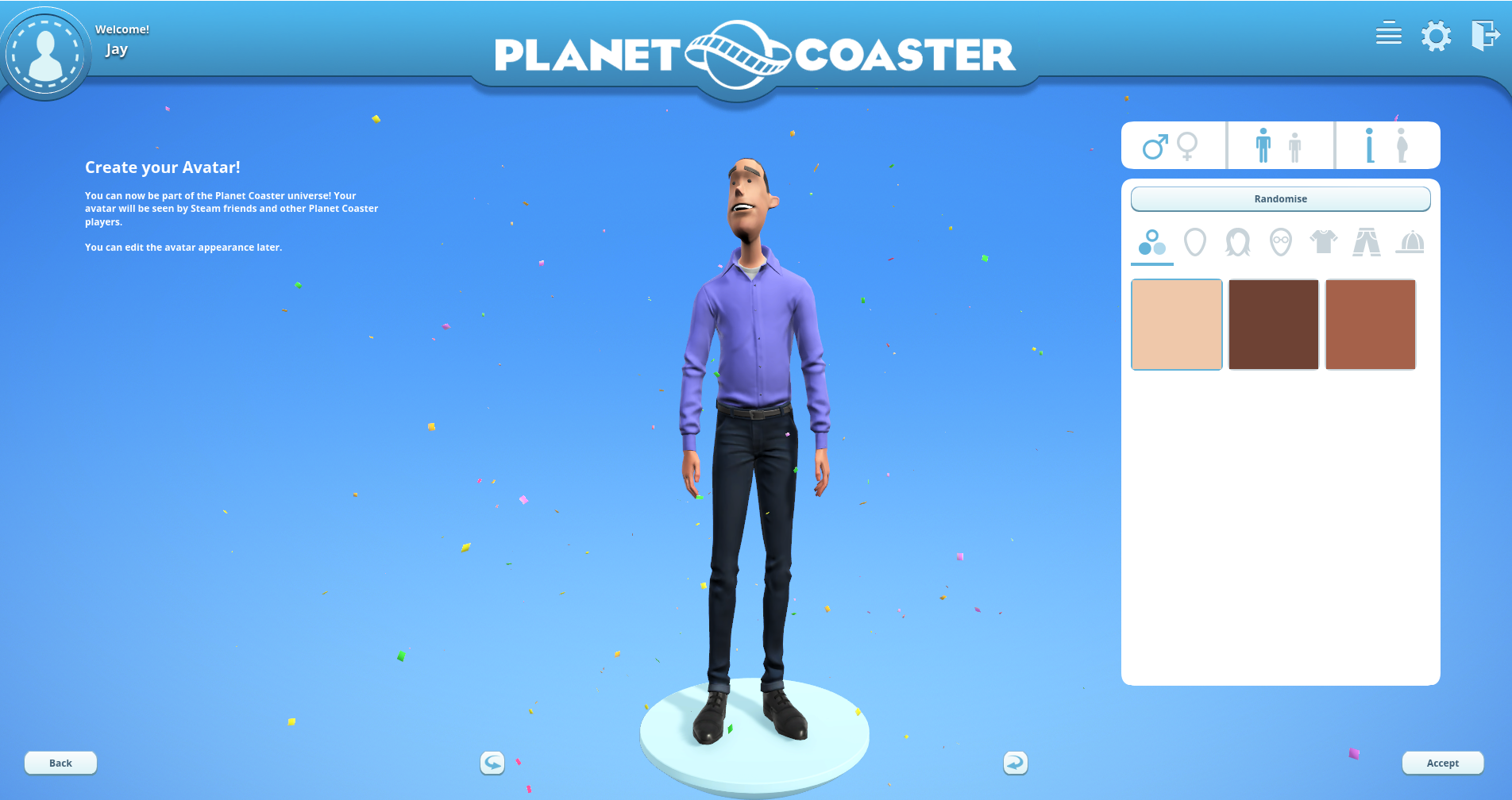 As you delve into the game, your first task is to create an avatar. This will ultimately be your identity to other players within the universe of Planet Coaster, allowing friends and other players from around the world to connect with you. For those who have played The Sims before, it’s very similar at this point, you get to select from basic features which include facial, skin tone, hair, accessories, body type, legs and hats. Once you’ve finished perfecting your avatar, then you get to drop it anywhere within the globe – for example, your country location.

Now that’s out of the way, it’s time to begin exploring the most exciting part – gameplay. For this Alpha version we were able to delve into both the Sandbox and Challenge modes, but the Career and Tutorial modes weren’t currently available. Those who aren’t bothered about manging their part financially can opt for the Sandbox mode, and those who are more business minded are sure to go down the route of Career or Challenge.

Next you get to pick the terrain type; Tropical, Desert, Grassland, Alpine or Deciduous. This is quickly followed by being taken into the gameplay from where we were greeted with the entrance to our park. Initial thoughts were very positive; you can hear the sounds of nature that you’d expect from the chosen terrain – very realistic indeed. However, you can just imagine that once you get creative and the park becomes populated, things are sure to become more hectic. Let’s do just that, shall we?

As you flick through the menu bar looking over the different options, it quickly becomes apparent as to how simple and easy this is to use. As we’ve seen with previous Tycoon games, it’s easy for the developer to over confuse the menu at the frustration to players. Whether you’re building a path, placing a shop, or building a rollercoaster – it’s all done with the great ease. An issue I found with Rollercoaster Tycoon World was the clunky controls, limited options and the viewing angles. Thankfully, none of these were an issue when playing Planet Coaster. For example, deploying a pre-made rollercoaster didn’t take up 1/3 of your park space, but rather you had plenty of room to put 50 or more coasters.

It was a pleasant surprise to see how many props and items were available, and that’s not taking into account of all the community created content that will be incoming after release. Importantly, the customisation option delves into all kinds of details, allowing you to drill right down into specific elements.

Another impressive aspect to gameplay for me wasn’t just the audio, but the weather effects, too. There isn’t just a day and night cycle that switches automatically – it’s gradual, meaning you get to see the sunset and the typical daily cycle as it would happen in reality.

The business-sim aspect is extremely good. You are given challenges that are designed to be testing and come with varying difficulty ratings. Isn’t it annoying when tasks are too easy? Not to worry, Planet Coaster will impress you in this field. The level of detail doesn’t stop short, all elements are covered, these include training your Janitors, varying their wage to inspecting analytics such as how many bins they have emptied. This type of details stretches to the finances of your park, rides guests and stores.

I’m not here to put Rollercoaster Tycoon World down, and I think it’s great that we have two similar titles on offer. However, the real difference between the two is quality – Planet Coaster excels in so many areas, from realism to depth. The final release of Planet Coaster is sure to be even more polished than what we had to experience with the Alpha. To conclude, Is this the real deal? Absolutely. Be sure to get excited about this one if you aren’t already, you’ll be able to begin playing it on November 17, 2016.