Today I will be looking at the Star Wars Battlefront series. While I haven’t played the new game coming out in November, I have heard news about it, and what I heard worries me enough that I feel I must write about it. And while I’m doing so, I’ll tell about what I have played- the original Battlefront II from 2005.

For those who do not know, the Star Wars Battlefront series are a series of first and third person shooters where do not play as some all-important character like Han Solo or Luke Skywalker, but instead as the typical grunts- your Stormtroopers, Battle Droids, and so on. The games showcase massive battles with dozens of enemies and allies, effectively reproducing an epic battle that could occur in one of the movies. But unlike there, you’re on the front lines, not as anyone of plot importance or incredible power, but as an easily killed soldier. If you are slain, you can immediately jump back into the battle as another one, choosing from several different classes. You win by either capturing all the command posts that enemies and your allies spawn from, or by simply wiping out the enemy until there are none left.

In particular, in the 2005 game, there are not only six classes, but four different factions to be played as, giving you a grand total of 24 possible characters. Generally the first three in every group are mostly identical in function- you have a basic soldier, a heavy soldier with a rocket launcher, for facing off with tanks and the like, a mechanic that can hack enemy vehicles and fix machinery, and a sniper. The other two classes are more unique, depending on your faction. 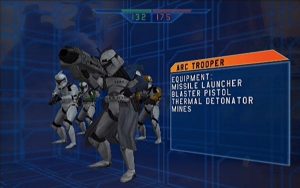 Said factions are the Galactic Republic, with its army of clones, the CIS with their Droid forces, the Rebel Alliance with their assembled troops, and the Empire with their onslaught of Stormtroopers. The Republic always fights the CIS, and the Rebels always face the Empire, since by the time the latter two exist the former groups are gone. I do wish that you could have any group face another, but that is one of my few qualms with the game.

Aside from land battles, there are also ones in space. Here your choices are reduced to two- the pilot or the marine. The former is equipped much like the engineer, except they have a weaker pistol instead of a shotgun, and time bombs instead of grenades. The marine is more heavily armed, but there is plenty of reason to pick the pilot instead. First, while the marine would be battle for a land battle, this isn’t one. Since you are in space, you need to grab a ship and fly out the hangar, to either attack the enemies’ own ships, their capital ship with its various targets, or to fly into their big ship and attempt sabotage. 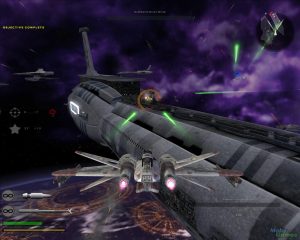 The pilot can heal your ship over time if it is damaged, making them the better choice for flying. Their time bombs do more than the marine’s grenades to the interior targets as well, meaning they are better at everything for these battles except actual combat, and I’d say from experience they’re passable at that too. As for your choice of ships, every side has four different kinds- a basic ship that excels at nothing, a fast firing but fragile ship for taking on enemy fighters, a bomber for blowing up frigates and parts of the capital ship, and lastly, a very durable but slow boarding ship. This one is nearly impossible to destroy, with the intent of carrying several soldiers into the enemy ship and letting them lose to wreak the place. You can also taking control of a turret on either capital ship if you reach the controls to use that, which is neat, but less useful than you might think.

Lastly, there are the Heroes. These are your main characters of your faction, like Darth Vader for the Empire or Obi-Wan for the Republic. Most of them are Jedi, but some have similar skills to the existing classes. One thing is always certain with Heroes though- once you have the points to use one, they are very hard to remove. While normal units have health, they instead have a bar that lowers with time and damage. They can refill by slaying enemies. Provided they can keep it up, they could even stick around til the end of the match. They also have far more health than the normal troops, but rockets and grenades are still a big threat to them.

Jedi in particular are the most common sort of Hero, and likely the most dangerous. Their lightsabers can cut down the enemy in one or two swings, deflect shots as they close in, and of course they can use the Force. Each character has two extra abilities; for most it is a grenade or other weapon, or some sort of buff, but for the Jedi characters they often can throw their lightsaber out like a boomerang as a distance attack, or can push the enemy, sending them flying. They aren’t unkillable, but they are a serious threat to any enemy.

The 2005 game also had a very impressive single player campaign mode where you play as a clone trooper, though you occasionally have the chance to switch to a Hero at various points. You follow this trooper as he narrates the start of every mission, from the ravages of the Clone Wars, to the Jedi Temple where you have to slay several Jedi, to the formation of the Empire where he becomes one of the newly minted Stormtroopers. Despite the fact that you are effectively playing as a villain, I found it to be quite compelling, and made me want to see all of these missions through to the end, to succeed no matter how difficult it got and how many times I died.

There was also the Galactic Conquest mode, where you pick a side and start building ships to invade and take over planets, fighting your enemy faction for them, gaining money, unlocking different classes and power ups to give your army an edge. Want to see the Empire beat the Rebels, or any other side win, for that matter? You can make it happen. You’re the commander.

All in all, the 2005 game is one that I continue to come back to and play because it has so much material that keeps it fresh and fun, from the various sides to space battles to simply running around and hacking up things with a lightsaber- before I get blown up by a grenade in an inglorious fashion that the movies would never allow.

With all that said, this game didn’t get an actual sequel- instead, EA Games simply rebooted the franchise and made a new one. How does it compare? Well… it certainly is much prettier. The graphics are incredible. But sadly, no matter how shiny and pretty one tries to make a stinker, it will still stink. 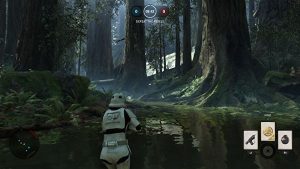 Those features I brought up about the 2005 game? You won’t find them here. Outside of a tutorial, there is no single player campaign, no Galactic Conquest or anything resembling it, just a typical battle mode and Survival, where you fight against hordes of enemy Stormtroopers alone. Which is interesting, but hardly compatible to what was lost, and certainly not as unique- especially since you have to play as the Rebel side when doing so.

Speaking of sides, there is only the two- the Republic and CIS factions make no appearance here, effectively halving the content of the game. There are also only four maps for the main modes, which is obviously far less, and even more tragically, no space battles whatsoever! Sure, there are points where you can use ships and even modes where you can fire at other ships, but it does not have the same effort put into it, from the details to the choices of vehicle down to the very controls themselves, which are outshined by its predecessor, and even games further back like Rouge Squadron for the N64, implying that ‘lack of effort’ is a very apt way of describing this section of the game.

Further, rather than using set classes, the game instead lets you use a customizable character with whatever weapons and traits you wish to supply them with. This means they can match one of the classes if you like, but they do not have to. While interesting, I prefer the class system myself because it fits in with the original purpose of the games. You cannot make your character unique because they are not the main character; they are just a soldier who could die at any moment. The fact that you can make a difference in these battles with what you have, change classes when it seems appropriate, and use what you are given is what made it fun for me.

Not only that, but if you are going to using a custom character, the game could at least let you be something unique. However, it does not let you customize very much- just the character’s head, gender, and species for the most part, while the armor and the rest of your character’s look is pretty much default, which makes me wonder what the point of making your character customizable is.

Wrapping this up, the 2015 game isn’t a bad game as far as shooters go, but as compared to the game it came after, it seems that decade was certainly not spent making improvements. If anything, it has slid backwards into a Sarlacc pit. While I cannot truly speak of the game coming this Novemeber, I can only pray that the developers take some of the criticism that was levied at this game to heart and make it the shining jewel it has the chance to become. 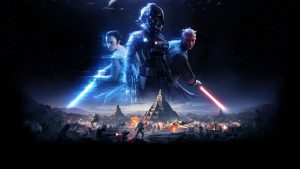 The signs do point to some improvement- at E3 this year it was said that there would be a single player campaign, and that there would be characters appearing from outside the Original Trilogy like Darth Maul and Kylo Ren. They are branching out and making better use of their setting. Although, I do admit that the fact they spoke of being able to play as Droids like it was something novel and innovative is very disheartening. As if they could lie and pretend the past didn’t happen! It has been 12 years, it is true, but Battlefront 2 from 2005 is still decidedly the best game in this series. Here’s to hoping they can prove that wrong.

Top 10 Strategy Games We are Most Excited to Play

Download Superheroes Mods for Minecraft 1.20.0 and 1.20: choose which character to turn into and use his weapons and skills to cope with any...
Read more
Best Games

If you play a lot of racing games, then you’ll know just how important it is to feel immersed. The rush of racing against...
Read more