Today I’m looking at another Castlevania game, Dracula X Chronicles, for the PSP. It is a remake of Castlevania: Rondo of Blood, where you play as Richter Belmont as he journeys into the castle to stop Dracula and save his girlfriend. Of course, being a remake, it is a huge improvement on the original graphically, and it makes everything from the scenery to the enemies interesting to look at, and a bit more intimidating. 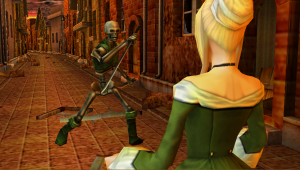 However, today I am not looking at an enemy or Richter, but instead the other playable character, Maria. First, she isn’t available from the start. The game begins with a prologue where Death appears as Richter is riding off to his home, trying to kill him as he rides through the rain. When Richter manages to survive a few attacks(or hit Death) the reaper leaves instead, and you move on to Stage 1- where Richter’s town is under attack by Dracula’s minions, and his girlfriend in particular is kidnapped, as are several other ladies.

Stage 2 is where things get interesting. Depending on what path you took through the level, and what boss you faced at the end, you move on to a different level afterwards. The normal level 2, however, which is what is important for my purposes, is where Richter enters the castle proper- and the level itself is an exact replica of the first level from the original Castlevania, at least at first.

First he is outside, though unlike the original, there are enemies waiting to attack you, in particular some very annoying birds. The castle bridge falls to let you in, and from there it is very much like the original level, with the added danger of falling chandeliers and Peeping Eye enemies. After that first room, things differ, with a giant bull-like enemy coming out of a wall to chase you, forcing you to run and jump around obstacles and enemies as it follows. Of particular note, the second torch along the way holds a Key, which replaces your current Sub-weapon. Try to hold onto that. The next room has the monster keep chasing you, but if you can scale up the wall there, it will die trying to break through.

This bit is functionally the same as the Merman part of the first level, once again, but the Key lets you enter a secret room past the Mermen. Using the key on the locked door shows a cutscene wherein the dark priest Shaft is talking to himself while examining a little girl being held in the air by magic. Thankfully, the scene isn’t as dark as any of that implies- he is merely fascinated by the power the girl seems to hold, but his musings on it are cut short when Richter arrives. He flees the scene, and Richter frees the girl. 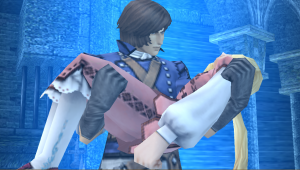 Maria talks with Richter briefly, revealing that she does know Richter’s girlfriend, but they were separated when they were taken to the castle, so she doesn’t know where she is. However, she nevertheless does want to help Richter, despite the hunter’s quite reasonable points that she is a little girl and that this is a dangerous castle full of monsters. She shouts at him out of frustration, accidentally summoning what looks like a small dragon to attack him. Richter avoids it, and realizes this must be the power Shaft was talking about. Since she seems to have magical powers and he can hardly stop her, Maria is allowed to help, and from then on you can use her as a playable character.

You can change what character you use and what stage you play from the main menu, allowing you to play as either in any level you’ve beaten. I personally used this to test out Maria on the first level, and I quickly saw that she works very differently. First, rather than attack with the famous Belmont whip, she instead summons animals magically to attack for her. Her basic attack summons doves.

The attack is functionally the same as the whip lash in terms of damage and reach, but the dove returns to her after being sent out, which can potentially hit other enemies or even the same one on the way back, especially since they return at different angles and such depending on where she is. She can also summon the Guardian Knuckle if you push up down right and attack, making said guardian appear and punch the air for a few seconds, though I don’t find this very reliable.

She can also slide by pushing down and jump, allowing her to reach places Richter cannot. Further, when Richter uses the jump button while in the air, he does a backflip, which can be useful to escape enemy attacks, but for the most part isn’t helpful. Maria on the other hand uses her magic to double jump, allowing her to reach areas that would be hard or impossible for Richter to reach, and even skip parts of the level’s hazards in this manner depending on the layout, helping you find the game’s alternate paths, bosses, and secrets. 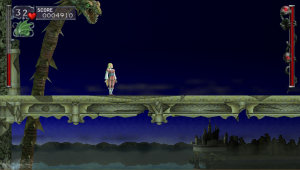 So her basic attack is on par with Richter’s and she can explore better- why use Richter at all? Well, aside from story reasons, she is a little girl still, and thus takes more damage from enemy attacks. She won’t last as long as Richter would in the same situation, which can potentially make boss fights more challenging, though certainly not impossible. Further, while Richter uses the normal sub-weapons the series is known for, Maria uses completely different ones, letting her summon different animals.

First is the Cardinal, costing one heart. This one lets her send out two red birds on either side of her. However, they do not go forward or back, but at upward 45 degree angles. I never found this one to be very useful. Second is the Cat, at three hearts, which summons a small white cat that runs forward. If it hits an enemy, it would damage them like your other attacks and bounce off the enemy before it keeps going, possibly hitting other enemy behind it.

The Turtle weapon costs three hearts, and instead of attacking enemies, it summons a protective turtle shell around Maria. This lets her completely ignore attacks around her and pass by enemies easily, though it also slows her down. She can jump like this, but it won’t actually help her at all. It seems to last until she pushes the sub-weapon button again, which makes the shell come off. The Dragon weapon summons a small dragon that flies over her head and strikes any enemies in its path til it flies offscreen. This does more damage than her normal attacks and costs five hearts.

The Songbook fires out a barrage of musical notes, while also slowing down enemies. Lastly there is the Egg, which releases a swarm of birds that fly up from where the egg she threw landed, attacking enemies as they go. Some of these may seem underwhelming, but when you use the Item Crash, basically a item-based super move, they can be devastating. 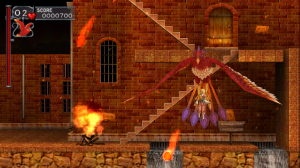 The Cardinal summons a phoenix that lifts her into the air protectively and rains down fire on all enemies(20 hearts), The Cat turns into a large tiger that gives Maria a ride and dashes across the bottom and top of the screen before dropping her off where she started.(20 hearts) The Turtle summons a larger turtle to dash across the screen. This has less coverage than the others, and only uses up 10 hearts. The Dragon summons a massive dragon that rampages across the screen several times longer than the others, hitting everything for massive damage.(50 Hearts) This is easily her strongest attack. 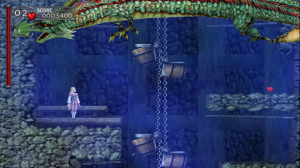 The Songbook has musical notes appear on screen and damage any enemy they touch, covering a large range.(10 Hearts) The Egg releases a red bird along with the others, flying out in the direction Maria faces and damaging everything in their path.(5 Hearts) Alright, the last two are still kind of underwhelming compared to the others’ flashiness, but still useful.

And that about covers Maria. In some ways, she is a better character than Richter because she can explore the levels more easily, though her odd set of sub-weapons may take some getting used to. Still, she is a lot of fun to play as, and I actually do prefer her to Richter. He gives the expected and needed Castlevania experience, but she offers something different and unique.