Legend of Zelda: Breath of the Wild Review

Breath of the Wild has been out just over a week and without a doubt I can say this is the best Zelda game out there right now. There are a few flaws that make it from being out right perfect, but all games have their flaws. Whether you play it on the Wii U or the Switch (I recommend the later only because there is a slight difference in distance rendering and it makes the quality look amazing), but whichever system you play the game is still going to be the same.

If you read my last article, you would remember that I mention a strange old man you meet in the first two hours of the game. After you gain the glider from the old man he reveals what happened a hundred years before Breath of the Wild takes place. Four Champions joined Princess Zelda and her favorite knight Link to defeat Calamity Ganon. The Four champions controlled the four Devine Beasts while Link and Zelda controlled their ancient weapons. But the group was ill prepared when Calamity Ganon was released and Ganon controlled the Devine Beasts and Guardians in which the Champions died, Link was fatally wounded, and Zelda was left alone to hold back Ganon for a hundred years. Now that Link is awake he must calm the four Devine Beasts, regain the Master Sword, and use the power to help Zelda destroy Calamity Ganon. 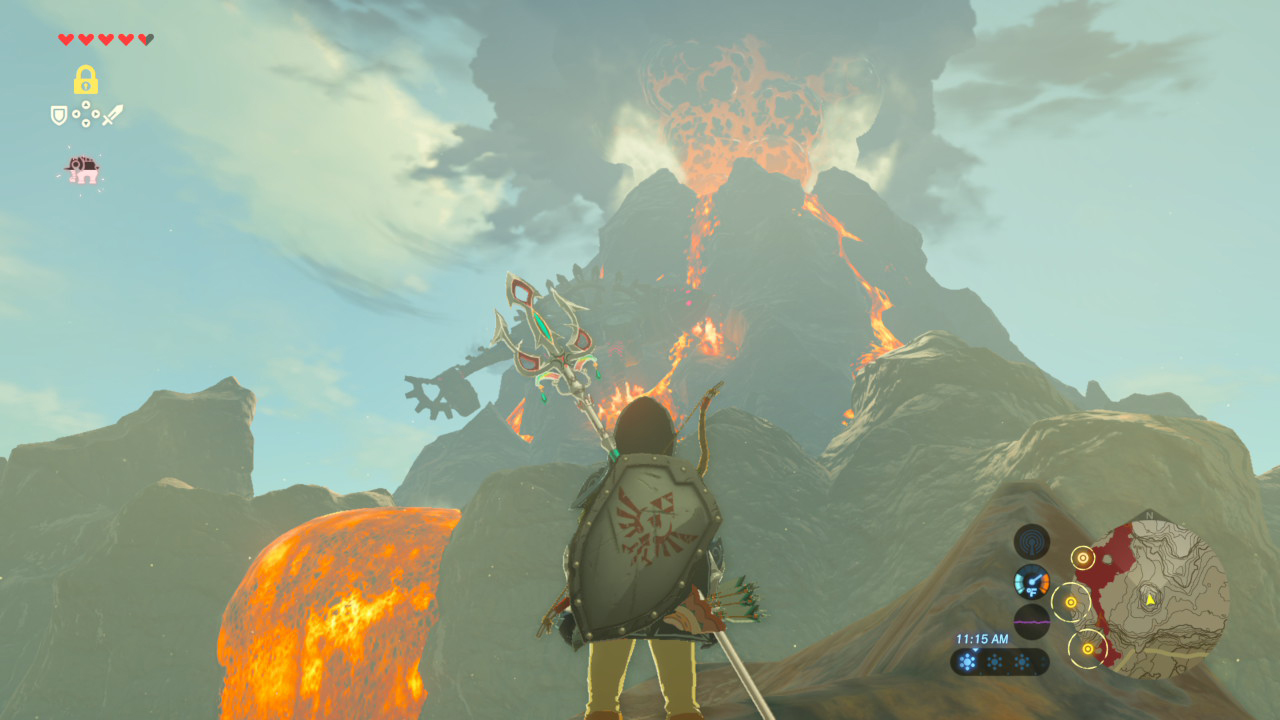 The story to Breath of the Wild is outstanding. From the moment you start, the player is entangled in a web of confusion of “what is going on and how do I stop it?” Once you learn how to stop Ganon you are determined to strengthen Link, regain his memories, and defeat Ganon.

Now don’t go thinking that you can easily jump into this game and immediately run for Hyrule Castle. You can, I’m not saying you can’t, I’m saying you shouldn’t. The castle is swarmed with so many Guardians and other nasty monsters that you will likely die before you arrive at the gate. Instead go around and find more shrines collect as many Spirit Orbs from the shrines as possible. When you have four orbs you may trade them at statues of the goddess for heart and stamina containers. Choose according to your play style, stamina helps cause you run out quickly but hearts help in obtaining the Master Sword. To gain the Master Sword you must venture into the Lost Woods with a total of 13 hearts any less and you will not gain the Master Sword, so go to shrines and expand your hearts, then go ahead an expand your stamina once you get the Master Sword.

The mechanics of the game are absolutely perfect; the magical musical instruments have been replaced with the Sheikah Slate that works as a pair of binoculars, a map, a camera, and your teleportation device. Fast Travels and Horses are your best friend. Taming spotted horses are easier than solid colored but have enough stamina and you can do it, but horses aren’t the only things you can mount. How many mounts can you find? The cut scenes are beautiful and the voice acting is very good. The synchronization between actual voice and the lips moving are off a little, at times it looks like they just have their mouth open and a voice speaking, but if you don’t focus on the lips it’s fine. I love the fact that I was able to obtain Bows, arrows, bombs (through runes), boomerangs, and many other items that in any other traditional Zelda game would take hours upon hours to obtain.

The only thing that bothered me when playing was the logical aspect of the game. Zelda has been holding Calamity Ganon at bay for 100 years and when Link wakes up he is ordered by the Ghost of the King to quickly get his strength and memory and save his daughter. When you leave the king and continue, the main quest Link is instructed to do other side jobs “to gain his memory and strength.” The game is practically saying “Zelda doesn’t need you right this second go ahead and smell the roses.” The side quests give you small tokens of gratitude and they can be fun, but thinking logically it’s ill wise to do them. Luckily the game doesn’t focus on time like Majora’s Mask did, so you have plenty of time to stop and smell the roses. I mean plenty of time. Speaking of time you have a clock at the bottom right corner of your screen that keeps track of the time of day, so if you don’t like playing at night, keep an eye on the clock find an inn and sleep till day. I highly recommend this on nights of a Blood Moon early in the game. When you are weak and unready for the monsters that swarm during a Blood Moon you will not make it through the night, avoid monsters on a blood moon at all costs. . Oh, and one last thing, before the end. 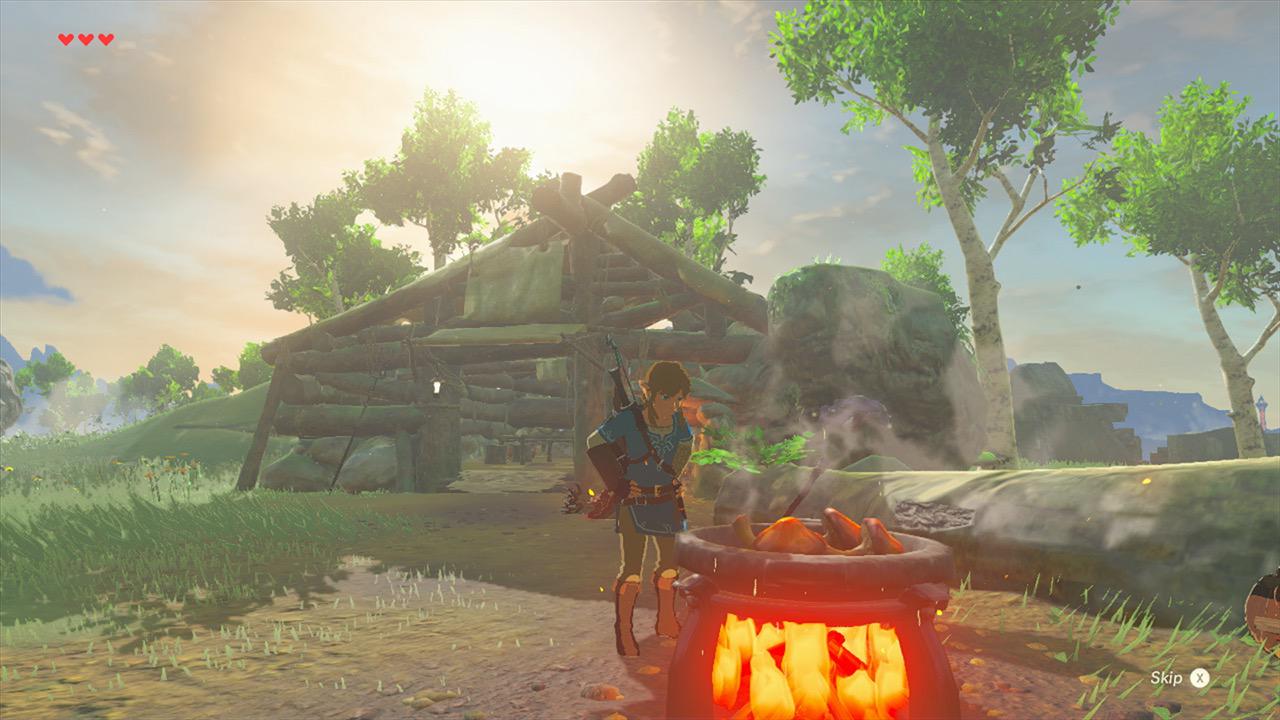 Where does Breath of the Wild fit in the crazy Zelda timeline? This is still being debated and we probably won’t have answers till the end of the year when Nintendo clears it up, because when we demanded a timeline they gave us one. So it’s going to come down to what Nintendo says, but here’s my two cents. Breath of the Wild takes place eons after the great sea of Wind Waker. The evidence is clear as to why it takes place after the sea receded and revealed the lands of the original Hyrule. First look at Link’s blue knight set, these are the exact clothes that young link wears at the beginning of Wind Waker. The more obvious pieces of evidence are the fact that Koroks and Ritos exist to species only to be found in Wind Waker and the fact that you can cook with Rock Salt, which is described to be from the ancient sea. The ancient sea receded and revealed Hyrule once more. Buildings look as if they have been buried in water for centuries and pockets of puddles can be found everywhere in the wilderness. Plus, the fact that Hyrule is so mountainous explains how it could have been submerged in water eons ago. But I can’t say more only what evidence shows us, this only a theory but maybe you have different reason to believe it belongs on another branch of the timeline. Please share your input.

Other than that, when looking at Breath of the Wild

it truly deserves a 10/10 rating. The voice acting is beautiful, the Sheikah Slate is incredibly helpful, and having access to so much so early in the game makes it absolutely amazing. This is a must have Zelda game for your collection and should not be missed.