(Mostly a rant about how awesome first-person mode is). From the moment they first announced that there was going to be a Grand Theft Auto V it was obvious that it would be making its way onto every capable platform…eventually. The timing between the release of Rockstar’s newest sandbox and that of the PS4 / Xbox One was a bit off, of course, but it worked out in the end, didn’t it? Oh, and was the wait ever worth it – this iteration of the fabled franchise is really nothing short of a complete revelation. Really, don’t go off thinking that this is a mere port or ultra HD remake of an already great game, because it is sooooo much more than that. While there are certainly a lot of critics out there ready to come down on Rockstar for basically creating a situation in which many gamers are forced to buy two copies of the same game, they didn’t take the easy road. No, they actually tried to make it worth your time and money, which is both fantastic news and much appreciated. 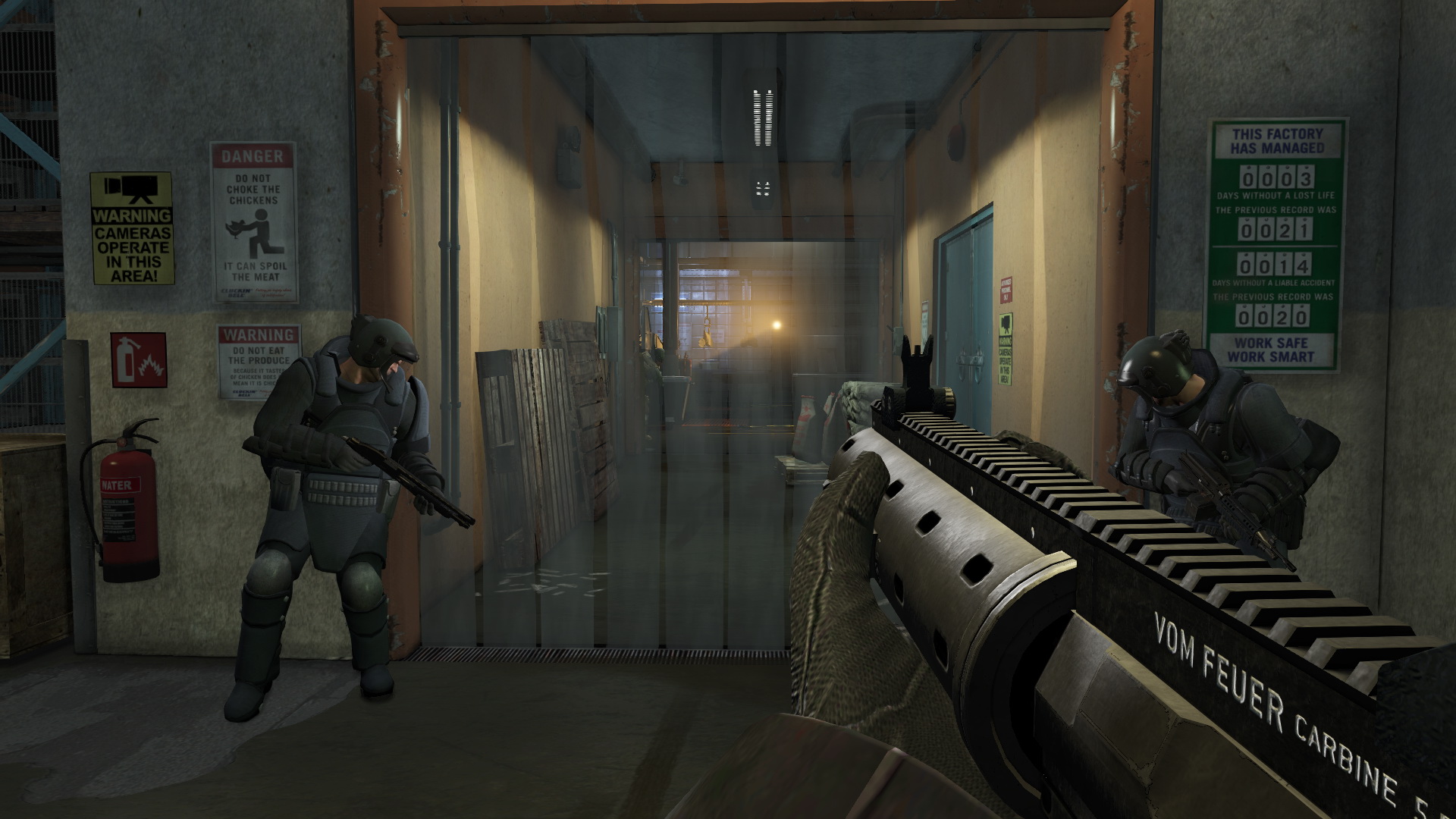 First things first, let’s examine the oft-talked about first-person mode… Why it took the developers this long to finally implement this type of option is really anyone’s best guess. The game feels like a totally different experience when you’re hitting the town FPS style. All of the typical sights and sounds just seem to be all the more intense and intuitive, sometimes you might even forget which of the three characters you’re playing as, which is actually a welcome change of pace. Since GTA IV emerged Rockstar has placed an immense emphasis on storytelling and character development, which isn’t a bad thing at all (don’t take it the wrong way). If you want to just disconnect from their imposed narrative and “do your own thing” you would still ultimately be staring at some fully-realized character, which again, doesn’t really let YOU take on the role as much. This first-person view setting changes all of that.

Of course going all FPS alters much more than the aesthetics of the gameplay, it forces you to change up your approach and take things more deliberately. For example, when in 3rd person view it’s fairly easy to see what’s going on around you at all times, like if a squad of coppers were about to run in with a full assault or unleash RPG fire on you, there would be a bit more time to react. In this first-person scenario the “action factor” is pretty much ramped up to 10 and everything just looks new and fresh. Once you get a taste for this you probably aren’t going to want to go back to the old system, well, only for special occasions, that is. It’s nice to be able to flip back into 3rd just to survey something, for instance. Of course then there’s driving to consider (and that applies to pretty much every type of vehicle). By and large you’re going to want to stick to 3rd person for land vehicles, for a variety of reasons, visibility being the main one. Nearly the same thing can be said about air transportation, although it’s not quite as bad. Perhaps the only type of vehicle which actually benefits from first-person mode is the jet ski (which is tons of fun when you’re behind the wheel). 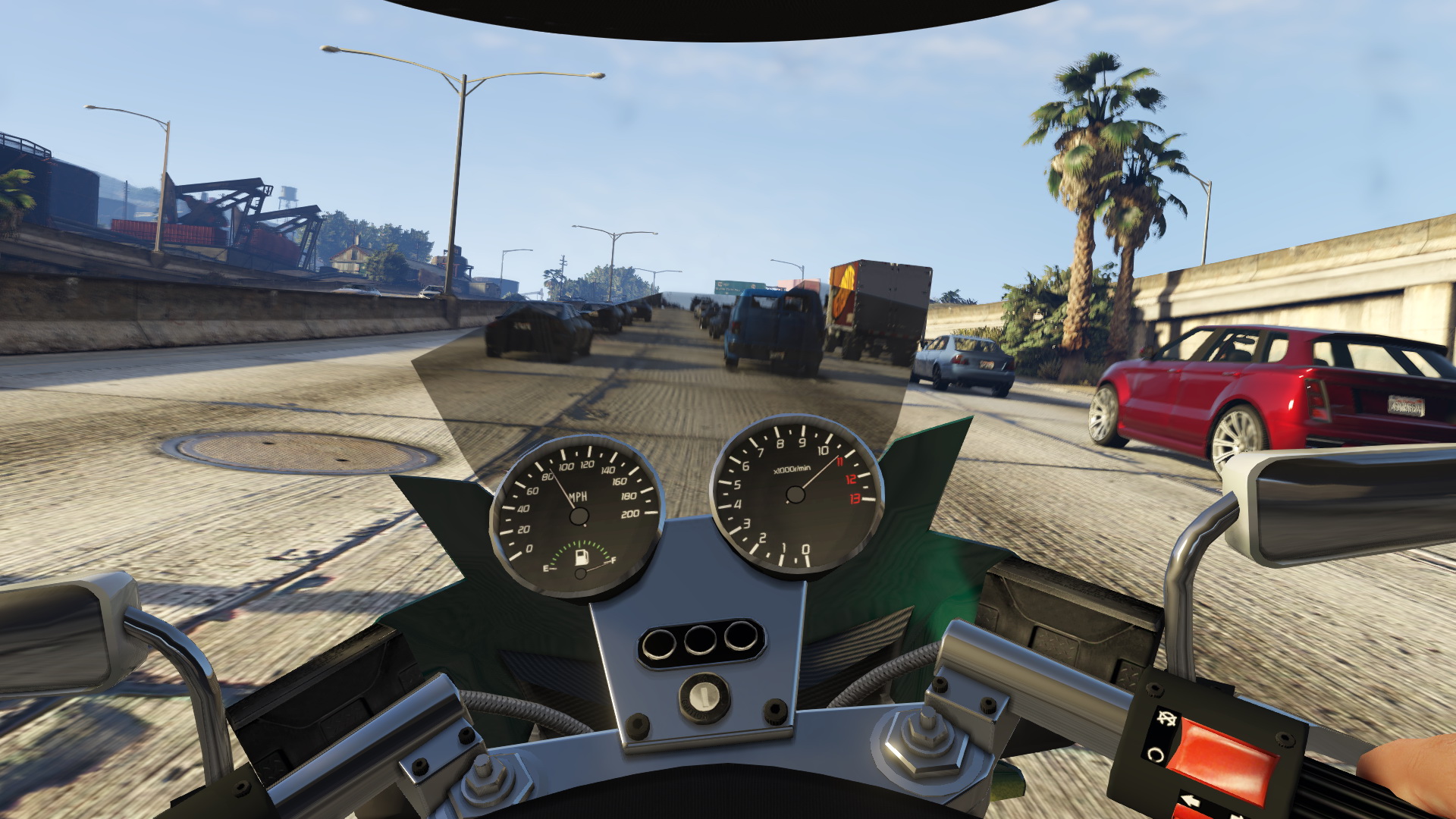 Then there’s the graphics, which (if they weren’t awesome enough before) are incredibly amazing here. The sheer level of complexity present, not to mention detail, is staggering to say the least. It’s basically witchcraft level game design going on here, as if Rockstar has voodoo doctors on the payroll. You’re not going to find any problems with much of anything, like that even matters though…most people will simply walk around in a daze dreaming of all the possibilities. This is the type of game that you can really get lost in and be loving it the whole way through, and now that it has finally landed on 8th generation systems, this rings even truer. Needless to say, if you’re looking for a game that can really show of your Playstation 4’s / Xbox One’s visual capabilities, this is it.

Jumping back on point…

The astute gamer might take notice of the fact that certain elements of this new version of GTA V bear a striking resemblance to other hit titles (when in first-person mode, that is). There are moments when you’d almost think you were playing Far Cry 4 or perhaps a CoD title when in heavy combat. Likewise, moving over to scenarios when you’re basically just covering terrain on foot you get a sort of “mirror’s edge” –type feel. Some might even perceive themselves to be in a Bethesda RPG for a minute when roaming around out in the countryside. That’s the magic of this expanded version of GTA V – it seems to draw from the best that’s out there and in turn, make everything its own. Of course it’s highly unlikely that a company like Rockstar actually outright took inspiration from the aforementioned and much more probable that it’s just the result of physics, logistics and limitations at work. After conquering the realm of the 3rd person sandbox perhaps they’ve decided to move on and siege FPS land? 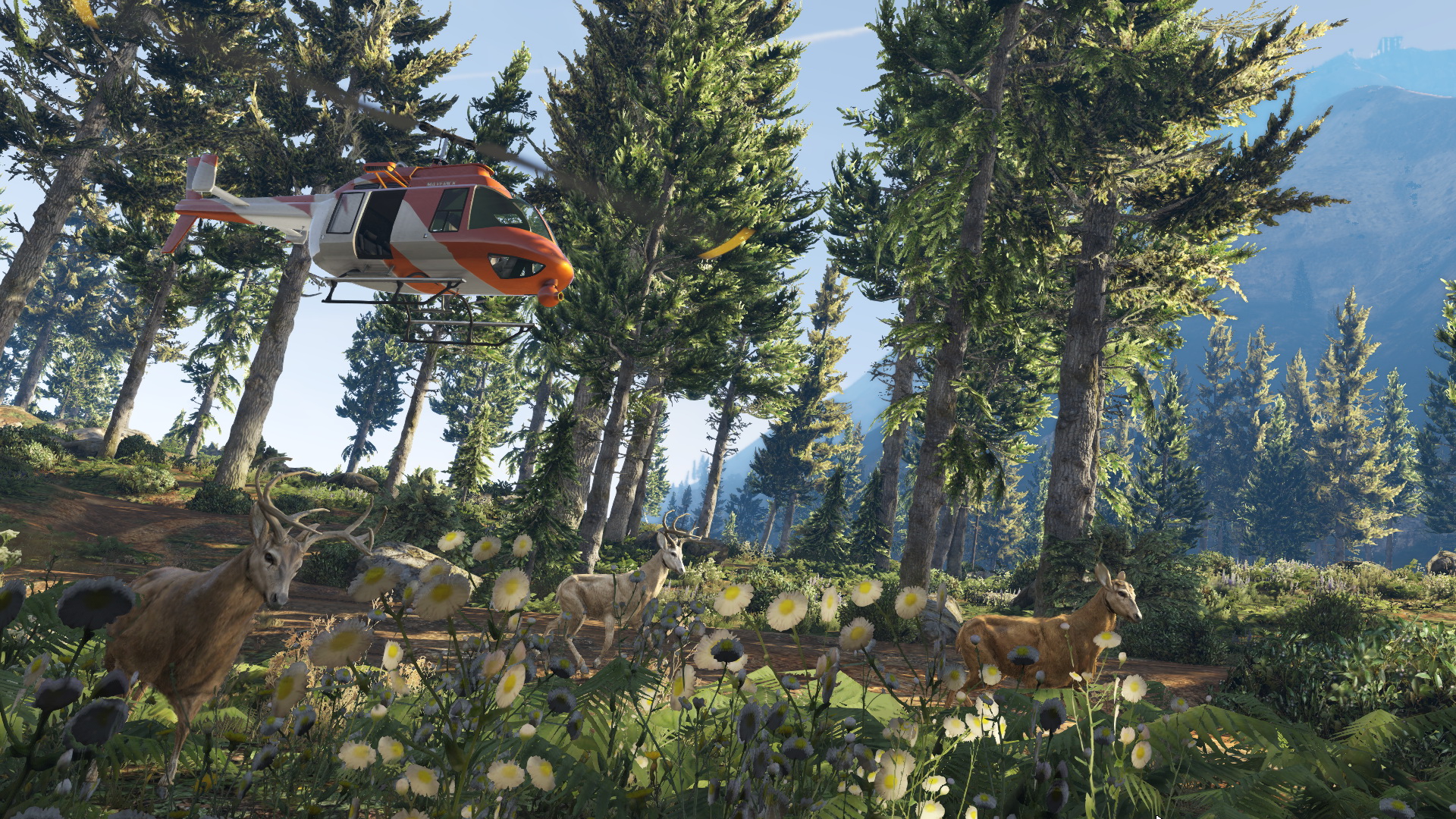 Again, they haven’t merely repositioned the camera – they actually went back and altered the game in several fundamental ways in order to facilitate a smoother 3rd person experience. Most notably, the control scheme changes up and takes on a decidedly sleeker and more interesting feel. Those who might like more modern systems will be happy to note that there is also a bona-fide cover system to be used as well as tactical rolls and movements to aid you in combat.

New content includes unique missions, additional weapons / vehicles, new music as well as the thoughtful wildlife photography element. The latter of which allows you to (just as its name implies) snap pics of wildlife from around the map, acting as a challenging diversion. Those who might be worried about whether or not their 7th generation game saves / characters will be transferred over need no longer fret, they’ve got you covered. Likewise, the new and improved GTA Online experience (included with the single player campaign) allows for 30 players per room now, which seriously ups the ante and craziness factor. 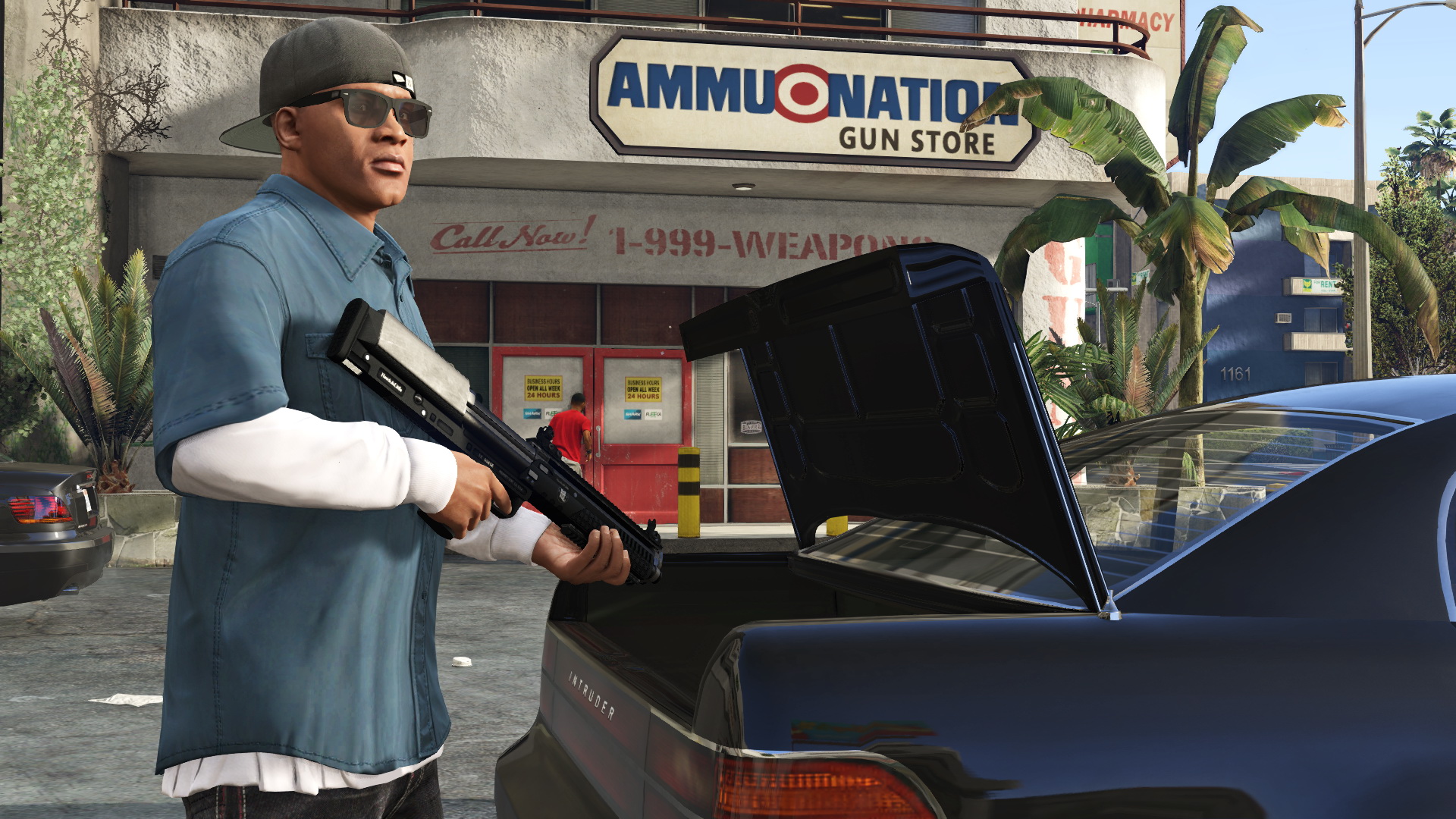 The absolute bottom line here is that GTA V on the PS4 or Xbox One is definitely worth picking up, even if you’ve previously bought it for a another platform. Aside from the many perks as well as the first-person mode, the game’s graphical improvements and obvious upgrades are enough to make it feel like a whole new experience. Naturally, fans of the series are going to flip out, but then again they’ve probably already picked up this version, haven’t they? In truth, one can’t think of any better game to pair with a next-generation console (currently) than Grand Theft Auto V, its myriad improvements basically transforming it into an even more amazing product. If you can only buy one game over the course of the next few months, let it be this one. 10/10 – a true “must-buy”.