Released onto PC, Xbox 360 and the PlayStation 3, Grand Theft Auto IV was almost immediately hailed as one of the greatest things to come along in video gaming, some calling it “the greatest game ever made”. Such accolades seem like they’re way too far-fetched, but considering just how much content, variety and sheer lunacy developer Rockstar North managed to smash into this title, it’s not surprising. 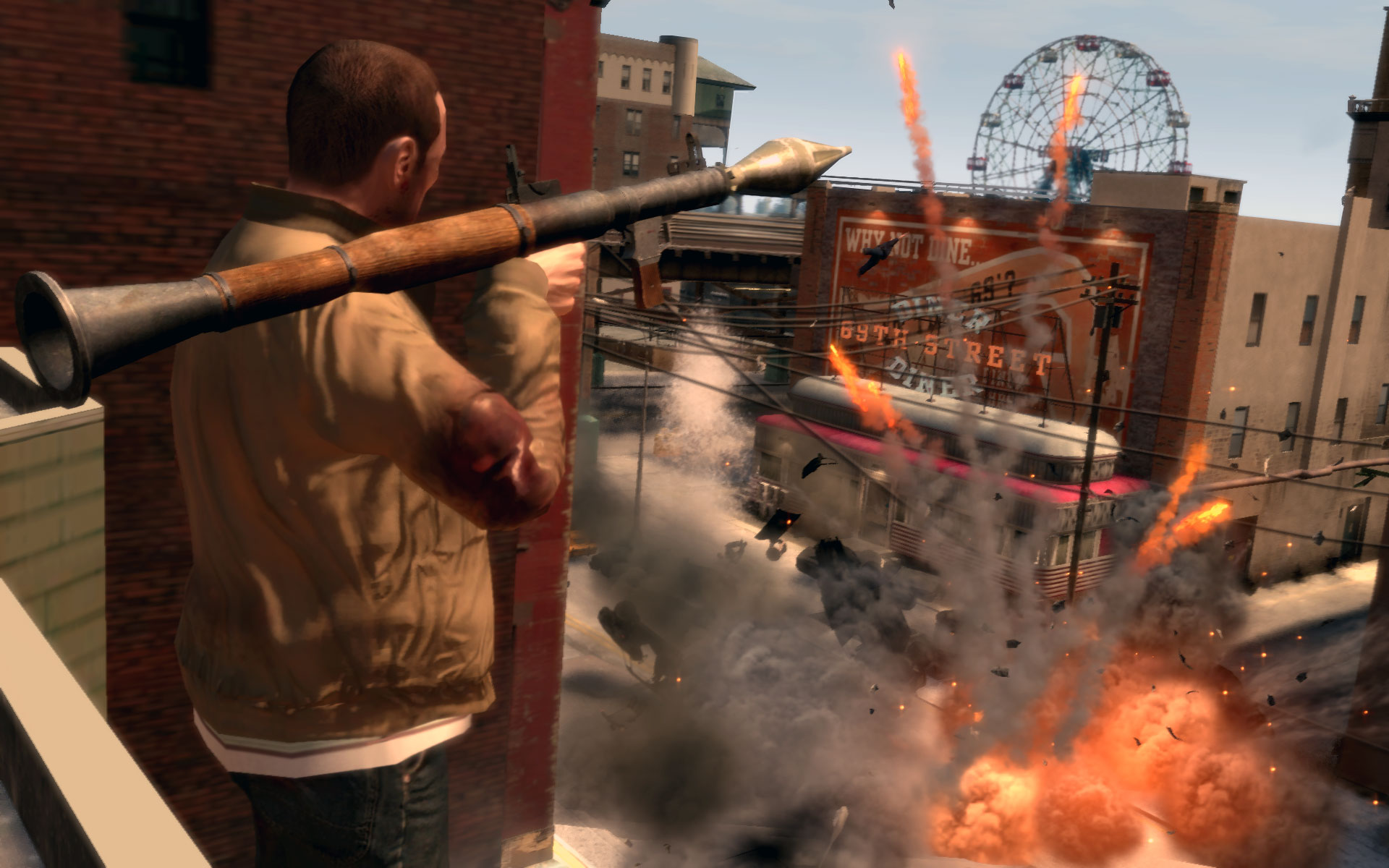 First off, the same basic 3D open world design concepts, replete with all the trappings of its predecessor are found herein. But it is all the refinements, both graphical and gameplay, that ultimately pushed it over the top. …Not only that, but the way they developed the character also created perhaps an even greater sense of connection with the onscreen action. The missions and arc of the story seemed to be even more fully fleshed out as well, making you feel as though you were actually taking part in an interactive movie of sorts, basically surpassing the previous limitations of drama within a mere “game”. If this all sounds like hype then you really should check it out for yourself, it certainly won’t disappoint.

Now let’s examine some of the titles finer points, shall we? First off…

Certainly a lot of people play GTA games because they love what the single player campaign has to offer. We are, after all, talking about what is essentially the essence of what made the series a hit to begin with. However, when it became apparent that GTA 4 would up the ante with an actual working multiplayer mode, everyone was impossibly stoked. What followed in its wake would go on to help formulate even more amazing changes that helped to make its successor, GTA V into an all-time smash, of course. We’re not talking about some loose, limiting multi experience either, this is basically a boiled down version of what you get in single but with the added ability to tap into co-op missions, straight up deathmatches, as well as street racing. What GTA IV offered gamers with regards to online play stood in stark contrast with what other games were (and still are) offering, upping the ante in more ways than one.

Taking things a few steps further with regards to basic gameplay, this title also added a wealth of little details and refinements like the cover system, which ultimately made everything much more dynamic, lifelike and interesting. Gun fights no longer felt like simple clunky affairs, instead they took on a more realistic stance. Likewise, there were so many mini games, shops, and other features added that it almost boggles the mind. Instead of running around in a mostly empty map that was sparsely populated with mostly linear objectives you have a situation wherein everything looks and feels much more alive and you have something to do no matter which direction you move in. The inclusion of a usable mobile phone was also extremely novel, lending an air of further realism to an already amazing experience.

Perhaps the most hyped aspect of Grand Theft Auto IV however was its graphics, which are provided courtesy of the RAGE engine (this also includes “Euphoria” and “Bullet Physics” as well). The game was released in 2008 to incredible commercial and critical success too, albeit some controversies still loomed over it, with everyone awestruck at its visuals. The incredible level of detail seen throughout the world, not to mention the great lighting and modeling that was done is still extremely impressive. Speaking of how the game was received and its popularity, it bears mentioning that it blasted records around the world and even managed to become the fastest selling game of all time in the UK (for that era). To say that it takes you on adventure is of course a gross understatement.

Chances are if you’re playing a GTA game these days it’s probably GTA V, which is understandable, it did after all improve upon the model established in IV in nearly every way imaginable. However, one shouldn’t downplay the values of this great game either, although it may be over five years old it still provides a wealth of content, great-looking HD graphics, and a similar multiplayer experience. All things considered, what many will probably be left thinking about after playing through this one though is the story, which seems to hang heavy on the player long after having completed it. Quite obviously it combines all sorts of action / crime movie tropes to yield a dramatic effect that really hadn’t even been explored up until the time of the game’ release. Likewise, it is pretty obvious that the magnanimous GTA V simply couldn’t exist in its current form if not for the advances made in GTA IV, so it has that going for it as well.