Today I am looking at a very interesting encounter from Epic Battle Fantasy 4. The game series is a typical turn-based RPG in execution, but the way it presents itself is as a tongue-in-cheek satire of RPGs in general. It pokes fun at everything from common enemy types like slimes, which have been turned into cute blobs with cat faces, to the main characters themselves who are caricatures of their traditional roles, though as the games went on they did start to develop their own personalities. 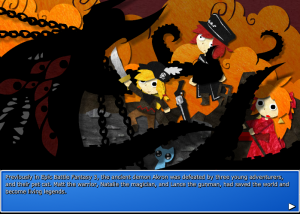 The game starts with a slight recap of the previous one, introducing our three heroes. Well, ‘heroes’ may be a bit of an overstatement- they immediately started pillaging towns, under the idea that since they did save the world, everything in it belongs to them. And in the village of Greenwood, a magical gem has been stolen. They say that if the gem ever falls into the wrong hands, terrible things would occur. Anna, our new protagonist, sets out to find it. Since she saw the three ‘heroes’ before it was stolen, she assumes they did it and goes after them.

She very quickly finds Matt, who has a pirate motif and is basically and literally called the ‘meat shield’. Throughout the game he consistently has more physical power and health than the others, so he pretty well fills the role. After Anna catches him, she realizes he doesn’t have the jewel, so she forces him to follow her as a hostage, and so he joins the party. He also has a variety of elemental attacks he learns over time, while Anna primarily fires different kinds of arrows and sticks to nature attacks likes vines or poison. Her starting weapon can sometimes poison enemies or call up vines, in fact.

This gives you plenty of time to get used to battling and having party members before you get all of them. You can switch between characters freely, even if they are not one of the three out, allowing you to change to any character that is best for a situation. Beating enemies also gets you SP, or Summon Points, which you can use to summon something to help you. To start off with you have the Scanbot and the Friend Dog, though Nolegs quickly joins you when you find Natalie.

Friend Dog brings you random healing items, Nolegs slashes all enemies, and Scanbot scans your enemies, allowing you to see all of their stats by moving your mouse over them. This is, obviously, something you should be doing very often, since from then on you will know how that enemy reacts to various elements, how strong they are, what level they are, and whether they can be hurt by status conditions. 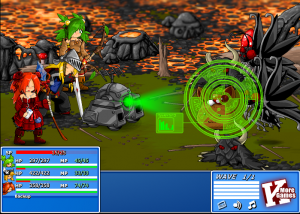 Natalie is also the team mage, capable of various elemental spells. Unlike Matt’s attacks which always do partly physical damage as well, hers are purely the element used, and she has a much wider variety. In addition, she learns healing spells later, as does Anna. The last member of the party, Lance, doesn’t join until while later- right after the first boss. Lance uses a gun, and deals out primarily darkness related damage. He also has a tank that occasionally shows up to help the party via machine gun shots to hit all enemies or the cannon to hit one.

I won’t delve into the first boss, but I will go onto the second, since that and the aftermath of it is today’s topic. The Crystal Golem is a giant rock monster with crystals jutting out of it, which change color in the middle of battle, changing its form as well. Each form gives it a different elemental affinity, and thus new weaknesses and immunities. It does not have many attacks- either it punches a character, doing elemental damage, casts a fire, ice, or electricity attack, based on its current form, on one character, or a bigger spell at the entire ground. 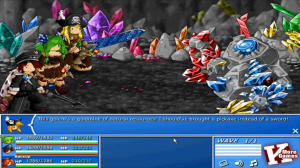 Though it has few attacks, it hits incredibly hard regardless of its form. Said form also changes every time you hit it. This is both bad and good- bad because it doesn’t have a consistent weakness, but good in that you can lock it into an element the party resists well, or one the next character can hit especially hard. It also has some weaknesses regardless of form; it is always weak to water and bomb attacks, though it isn’t as weak to these are it is the opposite element of its current form.

To compound issues, it summons Bits, small fragments of itself, to fight. These Bits are whatever element it is when they are summoned, and stick to it, giving them consistent weaknesses. They aren’t very strong- a good hit from something they are weak to will kill them in one shot. They hit you with attacks of their element, or by ramming you and exploding for a stronger result.
The boss is simplistic, but you have to keep changing tactics to keep up with it, and manage the enemies it summons on top of that. However, while difficult, the Crystal Golem should be manageable to a player that made it to it in the first place. More important than the golem itself though, is what happens afterward.

After the fight, I very strongly advise you heal up and save. Because as soon as you walk away from the boss’ former location, a battle will occur out of nowhere. Now, this would be an ordinary occurrence in Pokemon or Final Fantasy, but in this game enemies are perfectly visible on the map for you to battle, so you always know when you’re getting into one. This just comes out of absolutely nowhere. Matt even seems baffled about it himself. 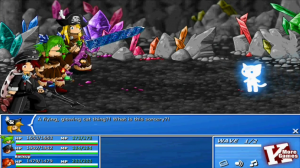 The creature doesn’t look very threatening, does it? But there are a few things that should immediately tip you off that this is no normal foe. First, you don’t have to scan it. Every other enemy you must scan, but here this cat like creature has all of its information plain to see- well, except it’s name, which only appears as “???”. My personal guess for why it doesn’t need scanning? Its immense power is obvious to all who see it, they can feel it simply by being in its presense.

It takes a lot of damage from darkness attacks and resists nothing, but can not be inflicted with any status effect. More troubling it is absurd amount of health, and very high speed. This means that very likely all of your attacks will miss, and even if you do hit it, you aren’t going to put so much as a dent in its health. 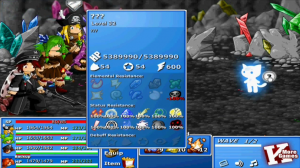 And all of this is before it attacks! As you might expect, it hits with far more force than any one character could survive, with damage up in the tens of thousands. As Anna will tell you after a bit, there is no beating this enemy- you just have to survive it. You can’t run- you have to face this harbinger of doom and struggle to stay alive. Luckily there, are items that will revive slain party members, and you’ll need them. 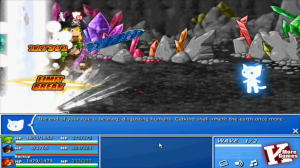 Thankfully, after a couple of turns the entity will vanish, leaving two Blue Crystals for you to deal with. These enemies do need to be scanned and thankfully are perfectly manageable, with a weakness for fire especially, and they utilize ice attacks. After the battle though, we see that the party is absolutely terrified of the experience they just had. They are seasoned adventurers, save Anna, and have plenty of reason to think they can handle anything- even monsters like the Crystal Golem aren’t so much threats as loot waiting to be gathered. But this being was on a whole other level, and if it wasn’t merely playing with them, they would assuredly be dead.

Anna herself, while shaken, doesn’t seem to be as scared as they are, possibly because she thinks she knows what it is. She leads them out of the caves to Whitefall Village, because there is supposed to be a jewel there like the one at her home, but it seems someone swiped it before they arrived. Lance demands that she tell him what’s going on, so she tells them what she knows- though she warns them it may sound crazy.

That being, she thinks, is Godcat, the creator of the world. She made cats in her image to rule over everything, and for a long time things were peaceful… until the cats grew too friendly towards humans. Believing her creations to be unworthy now, Godcat punished them by removing their arms and legs, explaining why cats look at that way in the game. Godcat vanished from the world, leaving behind only three jewels- two of which are now stolen. They say that if the jewels are ever brought together, Godcat will return fully and bring catastrophe once more. 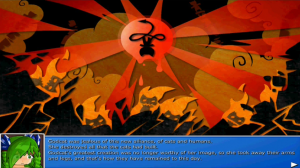 And so, we have the premise of the rest of the game. What you saw was merely a brief glimpse at what the deity can do before she was forced to flee, not having enough power to continue battle. Godcat will return unless the party can find the jewels and stop her return- and I’m sure seeing her once is enough to tell any player that they don’t want to face her once again.