Lately I’ve been playing an interesting game based on the Terminator francise called The Terminator: Dawn of Fate. It is functionally a prequel to the first movie, showing the events leading up to Skynet’s defeat and both the Terminator and Kyle Reese being sent back in time. It is effectively a third and first person shooter, and a pretty fun one. Today I’ll be looking at what I think is the most notable boss from the game, but first, a bit on how the game works. 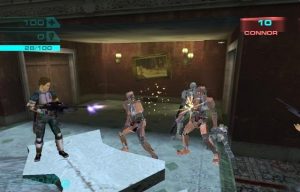 Normally you are running around in a third person perspective, but pushing R2 will put you in the first person, with the ability to aim at particular parts of your foes instead of just their body. As you may expect, most of your foes are various Terminator models, starting with the old and rusty T-400s and moving up from there. There are also HK-Tanks and the like, but most of your foes will be humanoid.

You have a wide selection of weapons- the first you will see is the AP50- dual hand guns. While especially useful early on and when you need to conserve your ammo for later, they aren’t all that great on enemies in later levels, unless you’re going explicitly for headshots, and even then it is best to use it on the weaker models. The PLM40, on the other hand, is a powerful laser rifle and a big step up. There are other guns, but this alone gives you a fair assessment- the later you get it, the stronger it will be.

There is also a Shotgun, which as you may expect works much better on close range targets. I’d not use it on Terminators- but instead the flying Recon robots, or the Skynet Initiates from later levels- cybernetically enhanced humans, who will be slain by one good shot from it. There is also the Grenade Launcher, which obviously fires explosives. They can be bounced off walls and the like to hit enemies out of sight or are waiting to ambush you, though my own aim with it isn’t great. Luckily, it will explode the instant it touches an enemy.

Weapons aside, there are two other tricks that will help immensely. First, Adrenaline. In the lower left corner of the screen is a gauge that shows how much Adrenaline you have. By pushing L1, you can speed up and automatically aim for your enemies’ weak points- generally the head. It will only last for about ten seconds at the moment, but with your improved speed and accuracy, that could easily be enough to get out of a rough situation. You get it back once empty by attacking enemies normally. 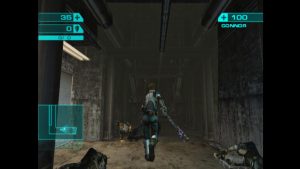 Second, your shock baton. This is a useful melee weapon that lets you pummel your foes up close without using up precious ammo. It is only really useful on humanoid targets, as they can be stunned by your blows, or you can sweep their legs out from under them by pushing in their direction as you attack. Once they are grounded, you can jam the baton into their chest, sending a powerful jolt through them and killing them instantly.

While your enemies do have melee attacks up close, they are much better at picking you off at a range, and their attacks are rather clumsy in melee in general, if still dangerous. You on the other hand can hit much more quickly, and so long as other foes don’t hit you while you’re pummeling one, you should be fine. You can also roll to dodge attacks and manuver around your slower enemies.

That’s enough explanation of the game; lets move on to the boss. Level 8 of the game, Infiltration, has you face off with a Terminator like the T-800 from the movie one on one. Luckily, the weapons at your disposal make it a bit more fair than it otherwise could be, but it is still hardly an easy bout. To start things off, the Terminator will be using a minigun that fires out a very fast barrage of lasers.

He generally fires in a sweeping motion across the very small room where the fight starts in, or at you directly. You can roll under it, but I certainly don’t expect you to dodge everything- especially since he shoots at you as soon as the battle begins. While you’re dodging and he’s firing, you will need to shoot back and whittle down his health. No weapon you use will so much as phase him, and if you try to use the shock baton he will knock you away with his elbow, unphased.

Shooting him will do damage still, though, with the normal guns chipping away at him slowly. Headshots will do a little more damage than usual, though obviously you shouldn’t stand still and take aim. Just rely on the Adrenaline to correct your aim when you can use it. Aside from those guns, you also have the Shotgun and Grenade Launcher at your disposal. For reasons that will become clear, you should try to conserve your grenade ammo. The Shotgun will take off about 7 health with every shot if you’re close, and if you keep moving around, he will have a much harder time getting a bead on you.

Once you knock his heath to zero, he will fall over, his cloak and minigun destroyed, and he will seem to catch on fire. At this point, I suggest moving while he is immobilized. First, move back into the small room behind you. There are a couple of health packs there, and a large gas tank. As you might expect, this will explode when you shoot at it for a bit. It is possible the Terminator could have blown it up already by accident while shooting at you, but there are a couple more around the level.

If it is there, you can stay and wait for him to follow you in before blowing it up in his face, or you can run past him into the hallway. Once he is up, he will start walking after you at a brisk and somewhat alarming pace- I’ll admit, the first time I saw him take a dozen shots to the face without slowing down, it was pretty scary. If you have some distance on him, he will punch the ground, sending a shockwave along the ground in your direction. You can’t jump, so the only way to avoid this is to either keep running so it doesn’t reach you, or just be elsewhere.

If he catches up, he will punch you, or try to shoulder charge into you- and he can even turn corners while doing so. He will also react to a barrage of fire by holding up his arm as a shield, effectively protecting him and making you waste ammo, all while he doesn’t even slow down. The hallway I mentioned leads into several different rooms, with ammo, armor, and health. A couple of them will have more gas tanks, and this time you can assuredly bait him into them- just make sure he doesn’t knock you over with a shockwave while you try to shoot it, or he may get too close and box you in.

The gas tanks will knock off half of his health each, and as he takes damage his skin will slowly burn off, revealing his true robotic nature. The Grenade Launcher would be useful here, as you do not want to be close by and it does about as much as the Shotgun did. Keep your distance, keep locked onto him, and keep firing.

Eventually he will fall again, reduced now to just his upper body. Worryingly, this only makes him faster as he uses his arms to crawl after you, trying to pull you down. At this point you will have to keep moving constantly, or he will catch you. This is also what you have been saving your Grenade Launcher ammo for- if you still have at least 20 shots or so, you should be able to finish him off at this point in short order, as he will simply come after you as fast as possible in a straight line.

So, that is the Terminator. In a game where most enemies can take a lot less of a beating than you, and come in droves, this one foe was worthy of having his own level- and if it were not for superior speed and tactics, he will very likely beat you. I appreciate this boss for his challenge, perseverance, and how it captures very well the nature of the Terminator from the movie- an implacable killer that will not stop coming after you until he or you are utterly destroyed.