Fatal Frame II: The Crimson Butterfly, also known as Project Zero II: The Crimson Butterfly, is my current favorite entry in the entire franchise, or at least out of the U.S. released games. The updated graphics and smoother controls make the gameplay twice as scary and fluid. I found the general story to be a more unnerving and nightmare inducing in this entry as well.

The story of Fatal Frame II: The Crimson Butterfly is set over 10 chapters (one you must unlock) and involves our main protagonists Mio and Mayu  (which interestingly means cocoon in Japanese) who are twins. Mio and Mayu have a deeper relationship than that of Miku and Mafuyu. Mayu broke her knee when playing while they were kids and Mio feels guilty about it. Mayu still limps to this day. Anyway, they are returning to an area where they used to play as children and end up getting lost in the Minakami Forest winding up in the Lost Village, also known as the All Gods Village. As they wander the abandoned town, Mayu seems to fall under the towns spell and wanders off. 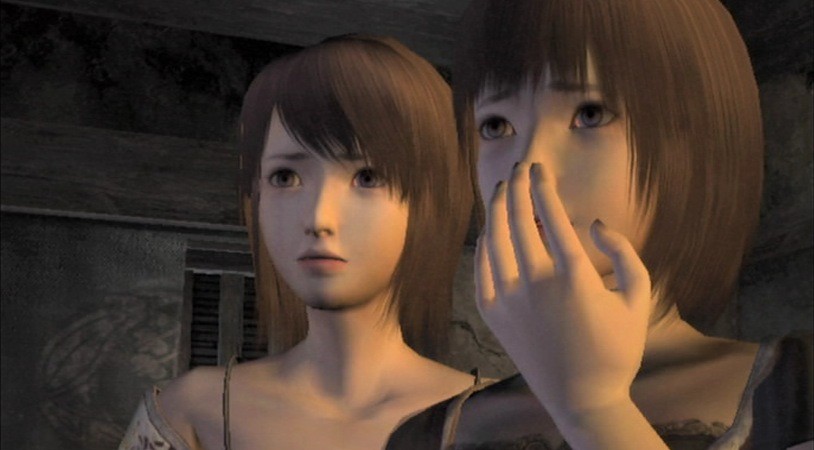 As you discover the mystery of the Crimson Sacrifice Ritual it is obvious the strangling ritual from the first entry in the series was simply not enough. No, we must have more! This time it seems there were multiple failed rituals which unleashes the Hellish Abyss into the lost village creating the ghosts you see during your visit. I won’t reveal the twists and clever tie ins that are present in this entry because it would ruin the fun, but I certify that it is well worth paying attention to the story in this one if you enjoyed the legend the first entry made built so well. The camera angles in this game are very well done. The points where the camera switches makes you feel like you’re being watched and can make certain areas seem more terrifying than others, which they sometimes are!

The biggest changes in Fatal Frame 2 are smoother graphics and controls, better sound direction and voice acting. The graphics in this game are quite better than that of the first entry as is with most sequels in a series. This is a game that great graphics does justice for though. The terror level is heightened in this game with the beautifully designed village. Graphics in this game were definitely at the top of their class for the era this was released in my opinion. The ghosts are designed much more uniquely and offer many different spirits to combat and photograph. With each ghost you capture you can imagine the fate these souls went through before dying. Cut scenes were beautifully designed and haunting. I loved every one they presented me with! All in all I would say this game has a more vibrant color scheme and most of the scenes remind me of dark paintings with certain noticeable colors standing out sharp against the black. Along with better graphics comes a well arranged menu. The sequel definitely improves clarity and understanding with the menu design this go around as everything is easy to read and is aesthetically pleasing. 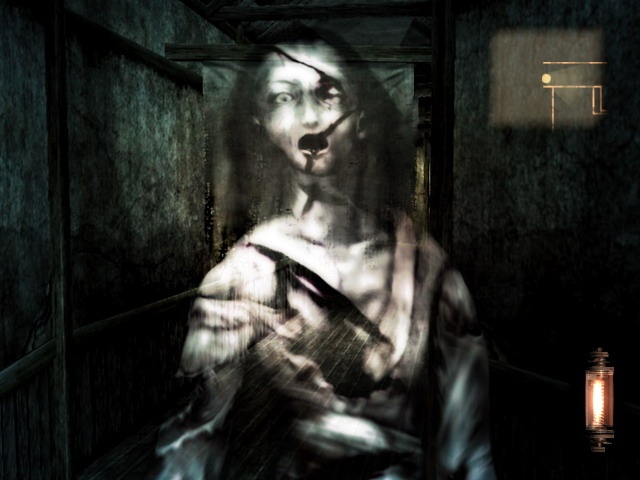 In the game, you mostly control Mio, but occasionally may be surprised with a random switching of control to Mayu. If you are not prepared for this, it can take you by surprise. Mayu can take damage but doesn’t have a health meter. If she dies it’s game over, but fear not, you really have to be neglectful for her to die. The game still scores you on photo points and allows you to manage your ghost album. The healing items also remain as healing herbs, sacred waters and stone mirrors. This time, you save via red lamps planted around the village. The Tecmo team did well with the save points in this series. Enemies are much better varied now in looks, enemy placement and attacks. The main difference in enemy placement in Fatal Frame 2 is you end up battling groups of ghosts early on. The general enemy leveling as you progress through the game feels much smoother of a transition in Fatal Frame 2. I love the opportunity to fight multiple ghosts early on as it allows early access to big points if you can line up multiple ghosts in one shot.

I was extremely happy to note that some of the problems the first game presented with the auto run had been addressed as now when you run you automatically pivot when you change directions rather than having to basically make a U turn to go the other way or stop completely and just walk! The smoother controls give you one less distraction to worry about whilst screaming and running for your life. The camera controls during Viewfinder mode is also a smoother experience. The frame in viewfinder mode is better designed and it makes you feel like you’re taking picture with a real antique camera! The information arranged on the viewfinder mode is more clear and easy to understand in this entry. The circular core shot meter in viewfinder mode is now centered around a focal point which makes it easier to get good shots. Additionally, they placed the charging symbols around the focal point rather than at the bottom of the screen leaving more of a field of view for good shots. The puzzles in this game are an improvement to the ones in the first. I found them to be more varied and interesting. With Mayu following you around most of the game (slowly), there are some places you need to lead her to switches to get you through certain areas.This entry is definitely a bit more challenging. There is a chapter where you are without light or weapon and must utilize dodging skills and memory to get through. 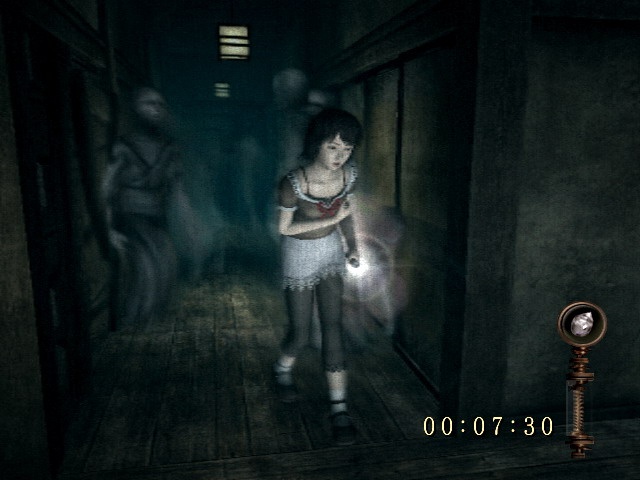 Audio direction was twice as eerie as It was in the previous game. The well placed jump noises and creepy ambient bells and whispers make you feel as though you are surrounded by unseen forces wherever you go in this game. The English voice acting of Mio and Mayu great in this entry and I felt they did much better at sounding more natural with the script. It also adds to the creep factor with random moments where Mayu will spouts freaky utterances. Fatal Frame 2 continues the wonderful addition of audio files this time, by way of spirit radio. This is a radio

That can read the imprint of spirits thoughts on stones and charms. It becomes much creepier than the cassette tales of Fatal Frame 1 as this is basically just EVP’s caught in the village. It makes it quite a bit more unnerving. This really added to everything the Fatal Frame team brought forth and fit nicely into the puzzle as a whole.

As far as horror goes, Fatal Frame takes the cake of the series so far, I have yet to play through Fatal Frame 3, which comes next so it might steal the crown, but we’ll see. Fatal Frame 2 has some of the most panic inducing scenes in survival horror memory. From mistaking a disembodied hand for your sisters to seeing her wander off joyfully chasing those damn crimson butterflies into the mist there were many moments that chilled my blood throughout the game. While I won’t say anymore to spoil the event all I will say are two words, GHOST DOLL… now that is terror.. 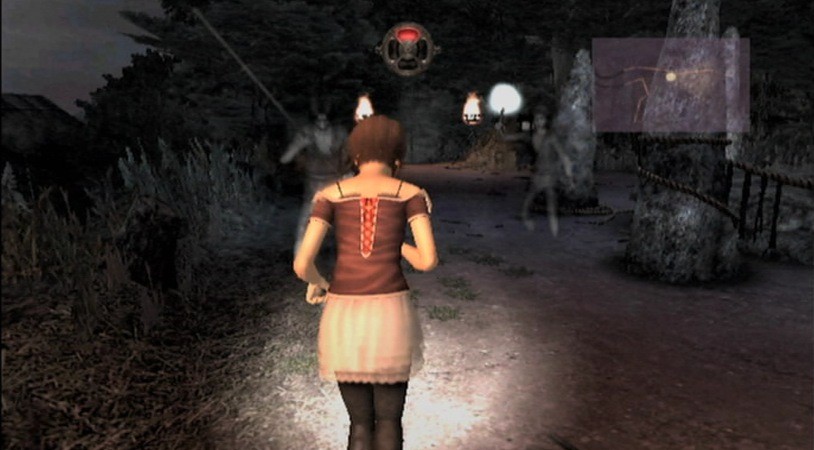 While I feel like I’ve had nothing but praise for Fatal Frame 2, the main complaint I would have with this game would be the chapters can go fairly quickly in the beginning, a speed run through this game could take less than two hours. My favorite part about Fatal Frame is the setting. The village gives you the feeling that you are in a more open setting and feels much less confining than the first Fatal Frame.

Fatal Frame II: The Crimson Butterfly is a sequel to be proud of. Greatly improved graphics and controls along with creepy direction with audio and voice acting pull this together nicely to make a scary night in. Puzzles are improved and the menu has been rearranged and polished beautifully. Story is much more complicated and fascinating this go around and the open environment polishes off this experience brightly. I hold a firm place in my heart for this title and would recommend this highly to any fan of horror and Japanese culture.