“Take me home, country roads/To the place I belong/West Virginia, mountain mama/Take me home, country roads”. So go the lyrics to John Denver’s famous “Take Me Home, Country Roads”, a song that Bethesda has been working very hard indeed to attach to its online survival RPG Fallout 76. This song is already something of a cultural touchstone, having appeared memorably in American Dad!, Kingsman: The Golden Circle and many other places.

It might seem like a bit of a non sequitur to start by talking about Denver’s iconic song, but there’s a parallel here to be drawn between “Take Me Home, Country Roads” and Fallout 76. With both, Bethesda is trying to stake its claim on a piece of popular culture that some might say has already been done to death. “Take Me Home, Country Roads” has already been picked over for its cultural relevance by a number of pop-culture phenomena, while Fallout 76 is entering an incredibly crowded survival RPG market.

Whether or not you believe Bethesda will succeed with the Denver tune, Fallout 76 is undeniably a safer prospect. Although it’s an oar in a crowded river, the Fallout name alone will be enough to make many people salivate at the idea of playing it. The Fallout series seems tailor-made for online RPGs; the Vault system provides an easy backstory for players (although when the numbers start to grow, questions will need to be asked), the wasteland is always huge, and the possibility to stake a claim on a little piece of heaven and tend to it yourself was already established in 2015’s Fallout 4.

Fallout 76 actually uses a modified version of that game’s engine, which is fine by us. Bethesda doesn’t have the greatest reputation for believable facial and character animations, but Fallout 4 came about as close as any Bethesda title ever has to creating living, breathing humans. Visually, the game is occasionally great, but mostly just OK; Fallout 4 looked better than many of its predecessors, but it still wasn’t able to match 2015’s graphical greats like Bloodborne and The Witcher 3: Wild Hunt. 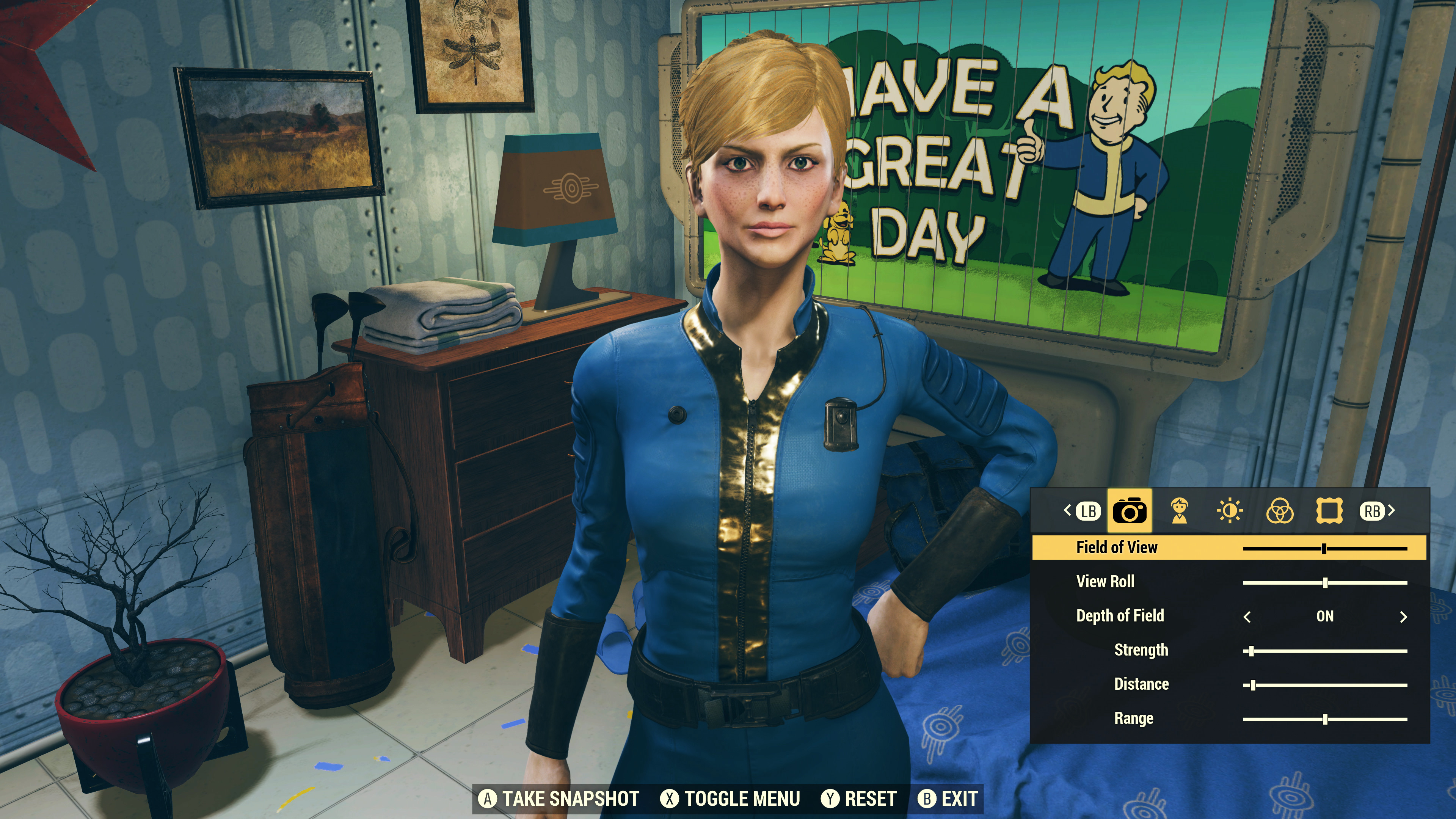 Also, anyone who’s hoping for a polished experience won’t be able to get on board with Fallout 76. This being an online game and thus constantly updated, it’s not hard to see Bethesda ironing out some of the game’s more noticeable visual creases (texture pop-in, facial animation glitches, the occasional complete graphical shutdown), but whether or not that happens, Fallout 76 just isn’t the prettiest game. There are beautiful moments: the sun setting over a (still somehow) verdant forest, the shine on the metal of an ally’s weapon, the shimmer on the water as flies play across its surface. It’s just not really a game that should be judged on the quality of its visuals.

That’s fine, though. Fallout 76 pitches itself more as an emergent survival experience rather than a narrative one. The main story, perhaps mercifully, is totally devoid of NPCs, possibly for technical reasons. Instead, players will follow a breadcrumb trail left by AIs, robots and voice logs for the main quest, which simultaneously makes the story much less compelling to follow and much easier to break down into bite-sized chunks and enjoy during tense firefight downtime. 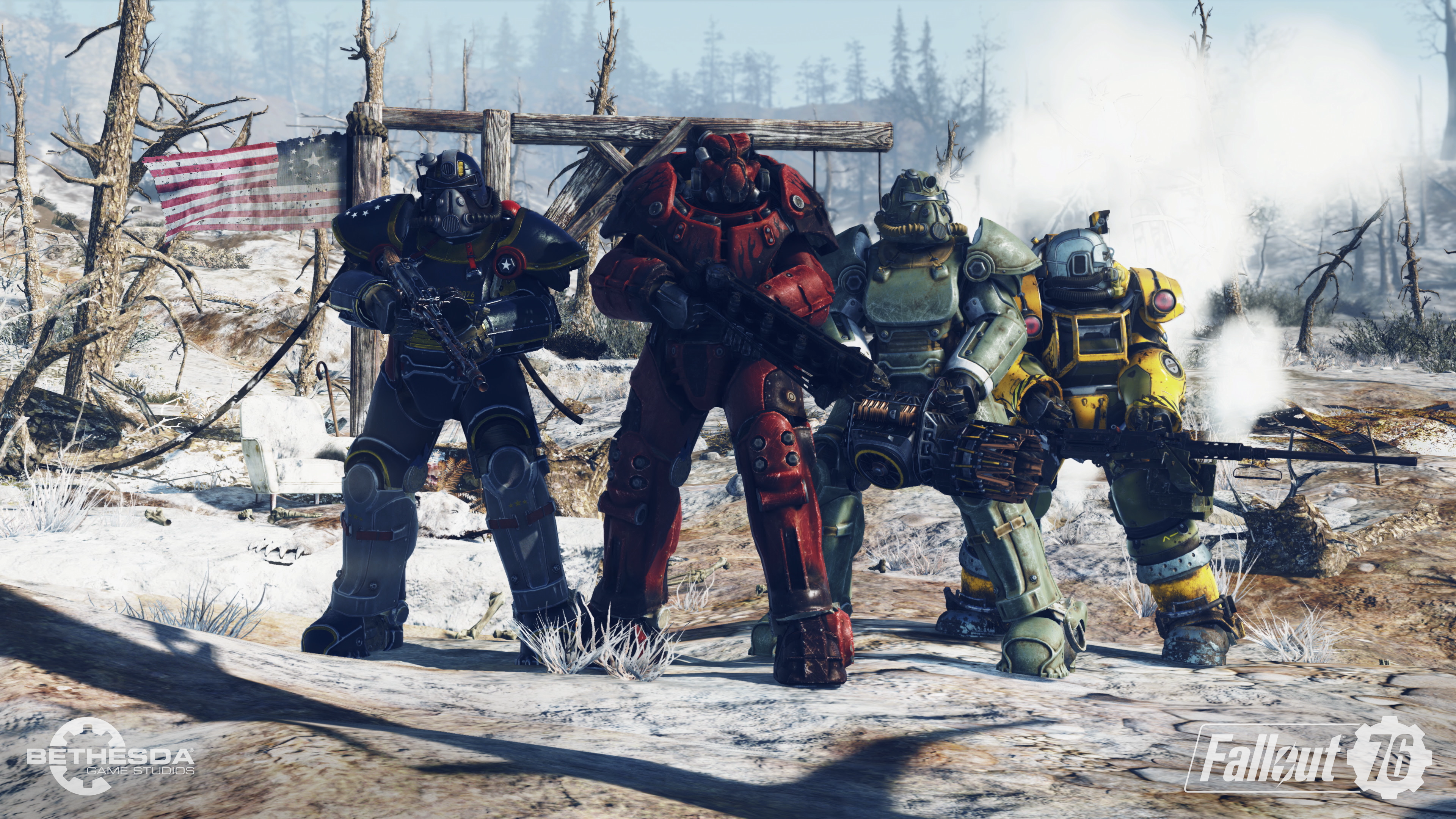 The meat of the experience lies with other players, and it’s here that Fallout 76 will be made or broken. In a market absolutely crammed to the gills with dusty wasteland survival games, Fallout 76 will need to rely on its massive name to draw in a consistent player base. Our time with the game was surprisingly lonely; though we came across quite a few other players, they mostly left us to their own devices, sprinting off on whatever quest or challenge they were currently on.

Bethesda is trying to remedy the sometimes-insular nature of online multiplayer games with a Challenge system, which sees players completing various tasks in exchange for in-game currency (which can then be used to buy skins, clothing and other cosmetic items). Frankly, the challenge system doesn’t feel like much more than an excuse, which is fine because it isn’t; it’s meant to facilitate communication and co-operation (or competition) between players. Trouble is, even in the best MMOs, players can sometimes be quite insular, questing in their own little bubbles without worrying about what their cohorts are up to. 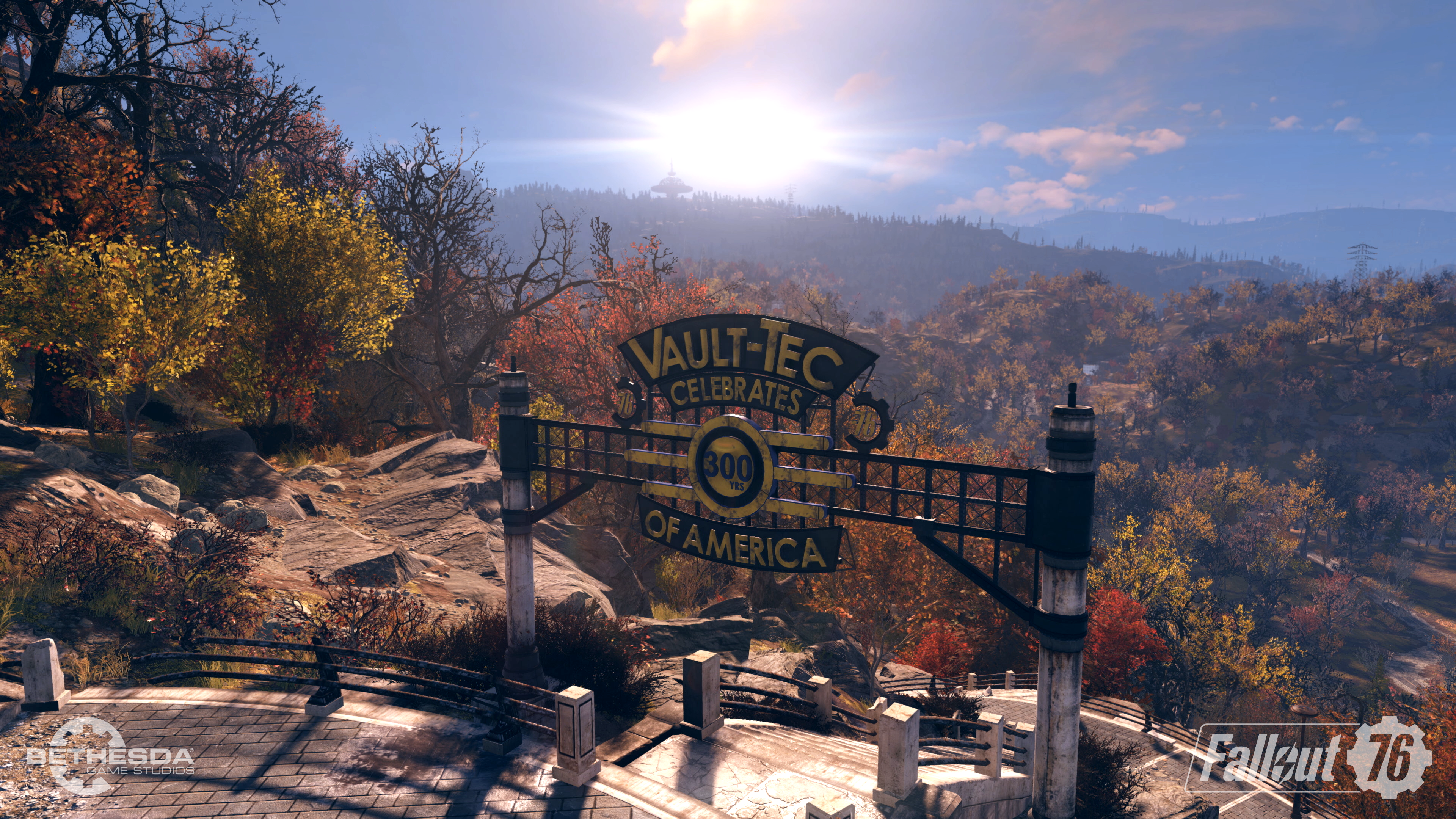 To Bethesda’s credit, it’s clear they’re trying to encourage players to work together and interact with one another. The game does have ambient events which require multiple players to, say, take down a massive monster, and our experience with one of those was pretty impressive, involving a large number of players working together to bring down a huge horde of bloodthirsty ghouls. For the most part, though, it seems Bethesda is quite eager not to anger the solo players, so interaction with other players is disappointingly optional.

Fallout 76 has a lot going for it. It’s occasionally visually stunning, and the act of exploring Bethesda’s new West Virginia wasteland (which is four times the size of Fallout 4’s already ridiculously vast world) is as compelling and addictive as ever. During our time with the game, we didn’t see any reason that it couldn’t just have been a standard single-player Fallout game, but there’s every possibility that with increased player numbers and word-of-mouth, this will change. Right now, it’s a slight but promising experience.