When you’re gaming, having access to the right equipment is key. After all, if you’re halfway through a raid or about to make a clutch play in a multiplayer game, having your hardware or your communication equipment die on you is one of the worst feelings you can have as a gamer. That’s why you shouldn’t skimp on quality, and why it’s so important to make sure your equipment is built to last. There’s a massive range of options on offer in all of the major console and PC gaming markets, so any headset looking to challenge long-established crowns is going to need to bring its A game.

That’s exactly what EPOS, in conjunction with Sennheiser, is looking to do with its GSP 602 headset. Make no mistake: the GSP 602 isn’t a cheap piece of kit. You’re looking at paying a fair premium for this, but when you unbox it and hold it in your hands, you’ll know that you’ve made the right decision. The GSP 602 is a headset for serious gamers and audio aficionados, hence the Sennheiser collaboration. It’s not for you if you’re just looking for a way to chat with your friends over Discord every now and then. If you’re part of that specific (but still fairly broad) market, read on to discover why the GSP 602 should be your new everyday gaming headset.

EPOS says its GSP series of headsets is “designed for the gamer that accepts no compromise” in the way their gaming accessories are designed. That’s immediately apparent when you lift the GSP 602 out of its box; it’s an esports marvel, built to last and designed to withstand even the most damaging of scrapes and drops. Any headset that’s purpose-built for esports needs to be able to survive a few drops and “rage slams”, and it’s our pleasure to report that the GSP 602 is capable of doing just that. You won’t want to be throwing it around your room, but it’s the opposite of a delicate flower.

The construction on this headset is worth writing home about. It features a solid metal hinge, ensuring that any movement or adjustment won’t damage it or loosen its connections over time. There’s also a contact pressure headband which you can adjust in the headset itself. We didn’t find any problems whatsoever fitting it to our heads or finding a comfortable position in which to wear it, and it’s likely that if your head is within the very wide range of shapes that the GSP 602 fits comfortably, you won’t need to move or adjust it at all while you’re gaming.

It’s also worth noting that the GSP 602’s ear cups are extremely comfortable. During a gaming session lasting several hours, we didn’t notice any significant chafing or pain from them at all, which, given their premium price point, should perhaps be expected. Nonetheless, even headsets at a comparable cost eventually start to feel uncomfortable, so it’s remarkable that the GSP 602 held up as well as it did. Esports gamers usually need to marathon their gaming sessions much more than casual gamers do, so it stands to reason the headset would need to weather that particular storm.

Although many gamers will, of course, be interested to know about the construction quality of the GSP 602, the most important factor for many will be the sound quality. Happily, this is another area in which the headset excels. Sennheiser doesn’t lend its name to any piece of kit; the German audio giant is a leading name in its field, so the GSP must carry its characteristic high-quality sound signature in order to compete with the big leagues. Again, this is something the headset effortlessly achieves, with a booming soundstage that feels at once wide and intimate.

EPOS’ promise here is “exceptional audio realism”, and it’s hard to argue with that promise. While we were playing Destiny 2, every shot that sounded in the distance immersed us in the atmosphere thanks to the GSP 602’s pin-sharp audio quality. Horror games like Outlast 2 and Resident Evil 7: Biohazard actually proved difficult for us to play because of how sharp the audio was, and we had to reduce the volume in order to make them palatable for ourselves. At times, the GSP 602 can be a little too booming, so you will rarely need to play at maximum volume.

For music and movies, the GSP 602 fares a little less well, which is to be expected as a premium esports-focused gaming headset. It’ll still effortlessly outperform many options at a lower price point, but you’re not going to find the same music performance here as you might from a dedicated pair of Sennheiser headphones intended for that purpose. If you only watch the occasional movie, you’ll be fine, but the soundstage is slightly muddier and less defined for music and movies, so this is very much a gaming-focused headset. 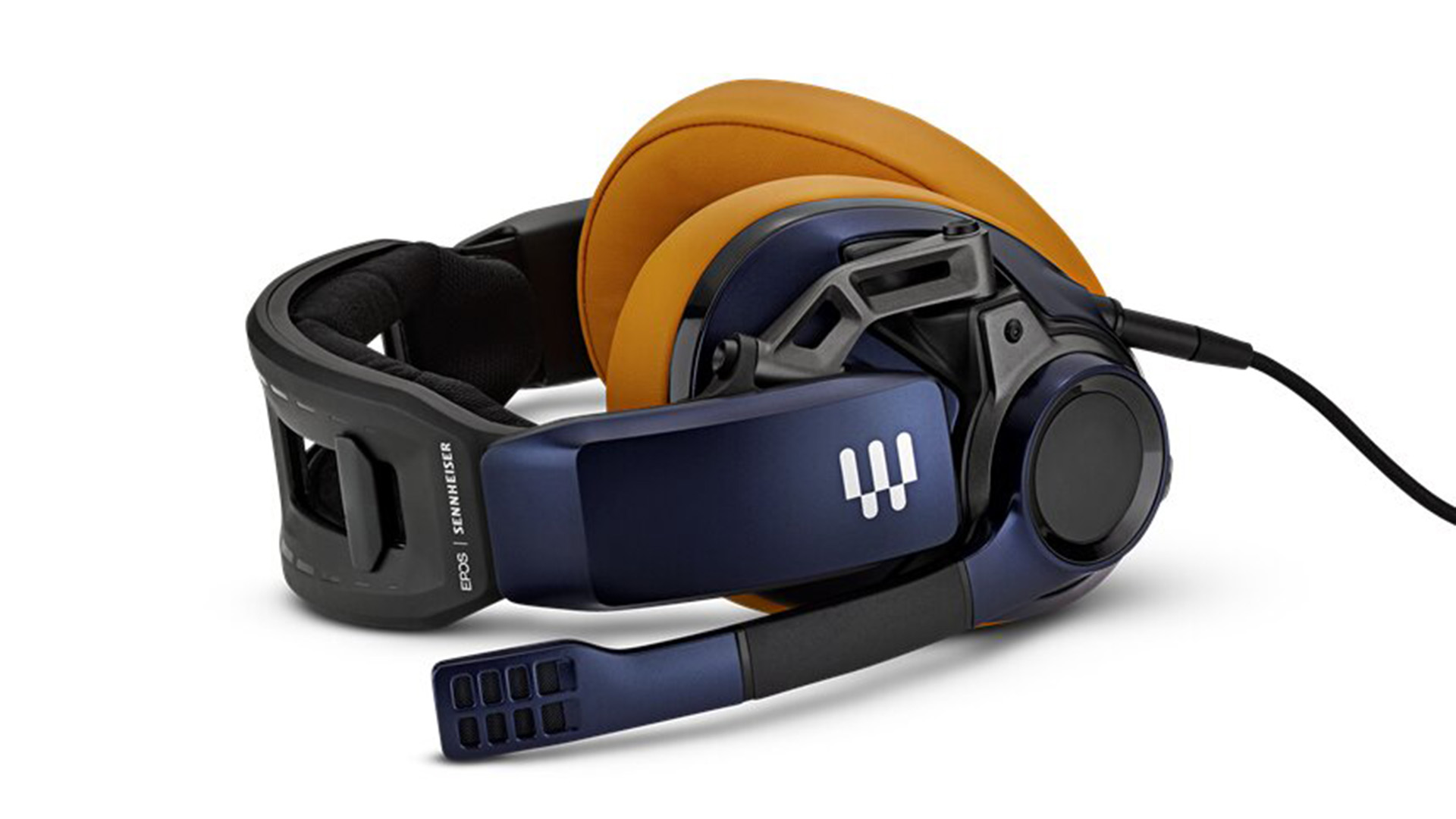 The EPOS GSP 602 headset is not Bluetooth or wireless compatible, so you’ll need to hook it up to your PC with an audio cable (which is, of course, included). That might be a deal-breaker if you desperately need wireless kit, but most people won’t sit far enough away from their setup that this becomes a serious issue. The cable itself is pretty high-quality, too, so there’s no need to worry if you accidentally pull it out of its socket while you’re gaming. The worst you’ll suffer is a brief disconnection before you scramble to plug the cord back in.

Elsewhere, there’s nothing to complain about when it comes to functionality. The GSP 602 is actually compatible with a wide range of devices; it’s not just a PC headset. You can also use this one with your PS5 (if you were lucky enough to get one), your Xbox Series console, or any last-gen console including the Nintendo Switch. That alone should make it worth a purchase if you’re a multi-platform gamer; precious few headsets have this kind of built-in compatibility, so EPOS has really gone the extra mile to include as many gamers as possible.

The boom mic on the GSP 602 is high-quality and also includes an interesting feature: you can lift it in order to mute it. We would have preferred a dedicated mute button, simply because it provides a little more peace of mind, but the system is pretty clever and we never found it had misinterpreted any of our commands; when it was lifted, it was muted, and when it was lowered, we could speak clearly. The headset has a closed design, so your sound won’t bleed out into the external environment, but the tradeoff is that the audio quality is a little less “open” than it could be otherwise.

One of the most interesting things about the GSP 602 headset is the esports masterclass program it comes with (at time of writing, anyway). If you buy this headset – or any EPOS GSP headset – you can sign up for four different esports masterclass programs headed up by esports partners Cloud9, OPL/LCS, BLAST, North, and SK Gaming. Each one of these masterclasses shows you a different aspect of the esports industry and demonstrates the skills, savvy, and knowledge you’ll need to enter said industry, as well as what you’ll need to survive there.

As an extra, these masterclasses are nice, although they will of course be of limited help to anyone who doesn’t have any interest in the esports world. Even if you’re not planning to become an esports professional, though, knowledge in this industry is worthwhile; esports is set to grow bigger and bigger in the next few years, so the more knowledge you can accumulate about this still-nascent industry, the better you’ll fare.

It’s very hard not to love the EPOS GSP 602 headset. Sennheiser’s audio engineering here is exceptional, providing a detailed soundscape for gaming and a more-than-acceptable audio performance when it comes to music and movies (although you probably shouldn’t use these as your daily music drivers, as they can feel a little cumbersome). The fit is exemplary, and you’re very unlikely to feel uncomfortable while you’re wearing the GSP 602. Our only complaints are the weaker sound when listening to music and the boom mic mechanism, which we’d prefer to be replaced with a specific mute button. Otherwise, though, if you’re looking for an esports-focused headset, you should get very excited about the GSP 602.

Official site page: EPOS.
Thanks for supply of the gear: Virtual Comms.