Say what you will about Disney’s “Aladdin” game for Sega Genesis, but it more or less perfectly embodies a certain type of 2D platformer which a lot of retro gaming enthusiasts really seem to enjoy.  In truth, there’s a lot to like about this rather straightforward side-scroller, even though it was published in 1993, the visuals and overall gameplay style are both markedly sharp.  If not for the somewhat primitive soundtrack one might be tempted to think it was released much later.  This is due to the use of cel animations, which provides the game with a very distinctive look.  Of course it remains firmly rooted in the development trends of its day, most of the focus being on environmental hazards and jumping as well as general navigation and light combat. 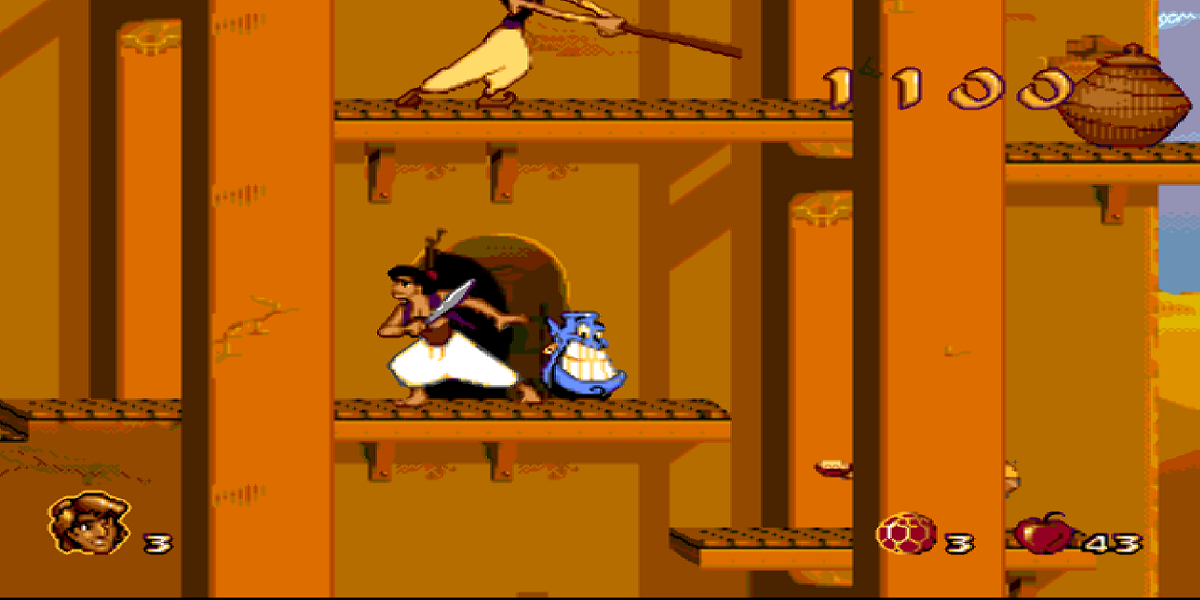 In case you weren’t already aware, there are a number of games all bearing the same title, “Disney’s Aladdin”.  They tend to be split along console lines, meaning each different platform has its own specific iteration featuring its own unique gameplay and so forth.  Right away, one of the biggest things that separates the Sega version from all the others is the fact that Aladdin is hauling around a big ‘ol sword to chop down enemies.  Naturally, this isn’t conveyed in an ultra-violent fashion, it’s more of a means of inserting some type of combat (you can also throw apples).

Moving Aladdin across the various terrains featured throughout, many of the same gameplay ideas are expressed over and over again.  The main focus is on the contrast between executing jumps, attacks and other tricky navigations while also soaking up the scenery.  Again, most will immediately notice that Disney’s Aladdin is rather fine-looking for an older title too.  This is thanks in part to the method they used when creating the animations which involved actually converting complex drawings from artists directly into sprites and so forth.  The result is a game that is definitely true to form when compared with what you find in the film.  Had they not taken this extra step, the game wouldn’t be nearly as interesting or appealing. 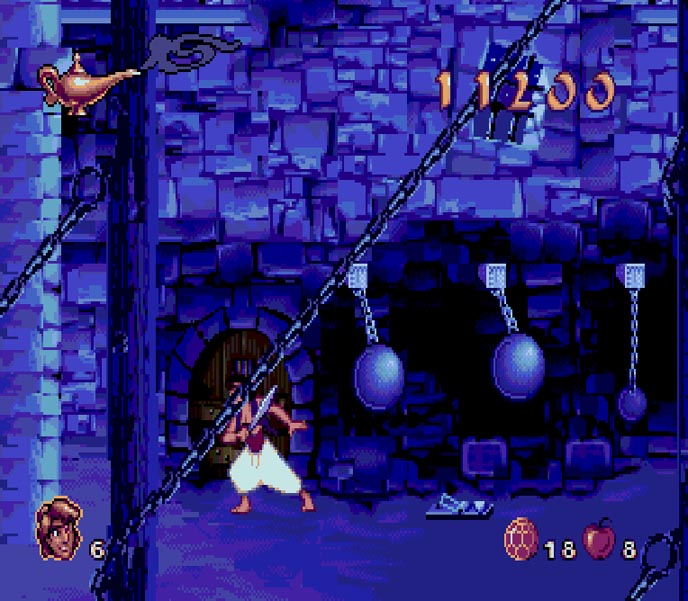 At its core, “Disney’s Aladdin” is one of those classic 2D platformers that really satisfies all the basic requirements of the genre.  It presents you with an attractive art style (and characters), features thoughtful level design, tactfully incorporates engaging gameplay as well as keeps you entertained throughout.  No aspect of it is beyond your abilities, but nor is it an empty cakewalk or pointless experience, it’s just challenging enough to keep you interested, in fact.  If you own a Sega Genesis (aka Mega Drive) console, chances are you also have this game already, if not, definitely give it a shot (assuming you can find a copy, that is).