Like many long running video game series, Legend of Zelda has staples that gamers would come to expect, like the general nature of the game, running around, investigating dungeons, collecting items, and so on. Today, I will be looking at one of these staples, which pertains to boss battles, and usually the final boss: The Dead Man’s Volley.

Simply put, the Dead Man’s Volley is where the boss(usually Ganon in some form or another) fires an energy blast at you, and you have to knock it back at them with your weapon. They will usually knock it back again, and it gets faster until either you or they slip up. If they screw up first, then they are stunned or damaged, and the battle goes on. Exactly how it goes and the end result varies from fight to fight, so I’ll be looking at some examples. Not every example, but most.

The first instance of this was from A Link to the Past, where Link has to face the evil wizard Agahnim. The wizard had used his magic to effectively take over Hyrule, brainwash the castle guard, made Link a wanted criminal, and he needs to retrieve the Master Sword to battle him properly, so the entire game has been building up to the fight. Though he isn’t the final boss, he is in fact Ganon’s alter ego, so in a way you are fighting Ganon the whole time.

Even with the Master Sword, Link cannot harm him directly, and trying will just electrocute Link. Not even the blasts your sword can fire at full health will do anything. But Agahnim will attack you, naturally, and fire off magical blasts which the sword can deflect at the wizard to damage him. The Bug Net can also be used for this, probably as a joke. 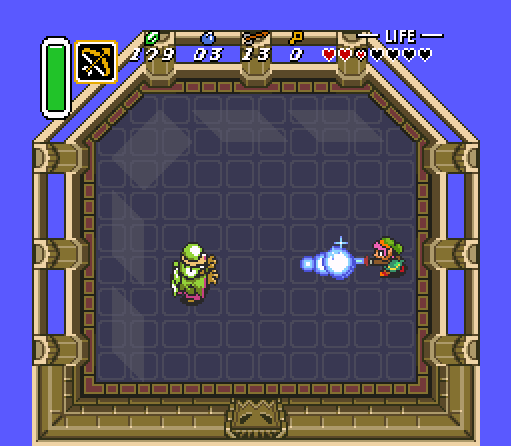 However, the wizard does seem to use some misdirection; all of his attacks look the same when he charges them up, where two orbs of energy flow from his hands to in front of him, then he fires. This means you have plenty of time to know he is attacking, but you also cannot tell which attack he is using, or if you should deflect or dodge.

His second attack fires what looks like four small orbs flying together. If you try to slash these, they will break off and fire in various directions, likely hitting you. The best thing to do is to dodge it and get some distance so you can avoid the shots when they break off. His final attack is a bit easier to predict, as he only uses it when he is facing the door where you came in, and unlike the others he will not turn to face you, but instead face the door every time. Sometimes when standing at that spot, instead of orbs of any kind he will fire off a blast of lightning. The lightning itself is instantaneous, and there’s pretty much nothing you can do but dodge.

In any case, that was the first time this sort of boss fight appeared, but certainly not the last. The next example was not so much its own fight as a copy- the final boss of Link’s Awakening is a powerful Nightmare that transforms into shadows resembling past encounters from the game and Link to the Past, including Agahnim. This copy is actually easier, as he does not fire lightning and Link won’t get hurt from slashing him, though it still won’t accomplish anything.

Moving onto Ocarina of Time, we have two bosses that do this, Phantom Ganon and Ganondorf himself. Phaontom Ganon at first has to be shot off his horse, but afterwards he will float in front of you and fire off shots for you to reflect. Unlike Agahnim, the spirit will be able to use his staff to reflect the blast back at you faster once his health lowers a bit, and the blast does not harm him, only stuns him, forcing him to the ground so you can hack him up with your sword. Oddly, an empty bottle can also be used to deflect the attack- it’s become something of a running gag. 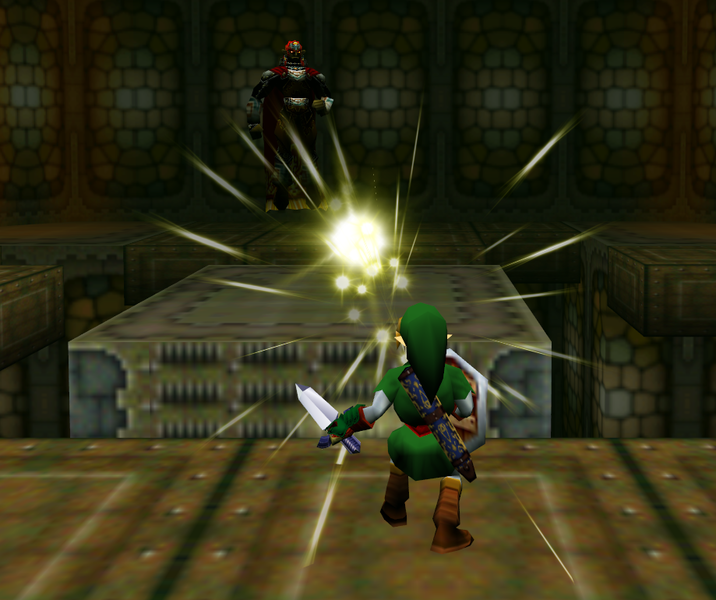 Ganondorf uses the same trick himself, but he spices things up with shock waves that destroy tiles you are to stand on, meaning you could get knocked to the ground below if you aren’t careful. Once he uses the energy blast attack it works much the same as with Phantom Ganon, with the addition that this only stuns him a little, and you need to use a Light Arrow while he is frozen in place to actually force him down for a beating.

He also has a third move where he fires a large wave of smaller blasts at you. This is best dealt with via a spin attack, and if enough of them are deflected back at Ganondorf, it will stun him like his normal shots, with the bonus that he cannot deflect them this time. He is much better at this than his copy, however, and is harder to actually bring down, and has more health.

An interesting variation of the Dead Man’s Volley appears in Oracle of Ages; one of the mini-bosses is a Blue Stalfos(basically a undead skeleton) that can use magic and wields a scythe. It can fire a large energy blast at you which, rather than actually damaging either of you, transforms the victim into something weaker. Link will be turned into a defenseless baby, after which the Stalfos will chase him with its scythe, and if it is hit, it will turn into a bat, letting Link slash at it in turn.

The semi-final boss of Twilight Princess also uses this- it is basically Ganon controlling Zelda’s unconscious body, hence Puppet Zelda. Much like the battles from Ocarina of Time, she will be floating around, and like Ganondorf she has some other moves to work with. First she can simply dive at you with her sword extended for a stab, second she can make a triangle of light appear below you. You need to get off that spot before the energy comes up to avoid damage. 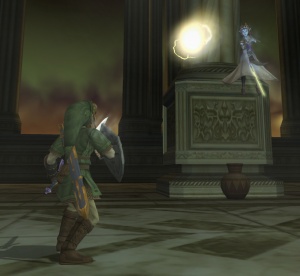 Third, she will fire a ball of energy at you from her sword, which you must deflect. Unlike the previous examples, getting hit by the orbs is all you need to beat her- though that makes sense, as she’s possessed rather than fighting of her own volition. The light she’s firing at you is basically purging Ganon from her.

Phantom Ganon makes another appearance in The Wind Waker. Though he looks very different, he basically works the same. Sometimes he will appear behind you and perform a spin slash, but normally he will stay back and fire shots for you to reflect. Stun then slash. Notably though, it does not explode or seem to die when beaten, it simply laughs and vanishes. 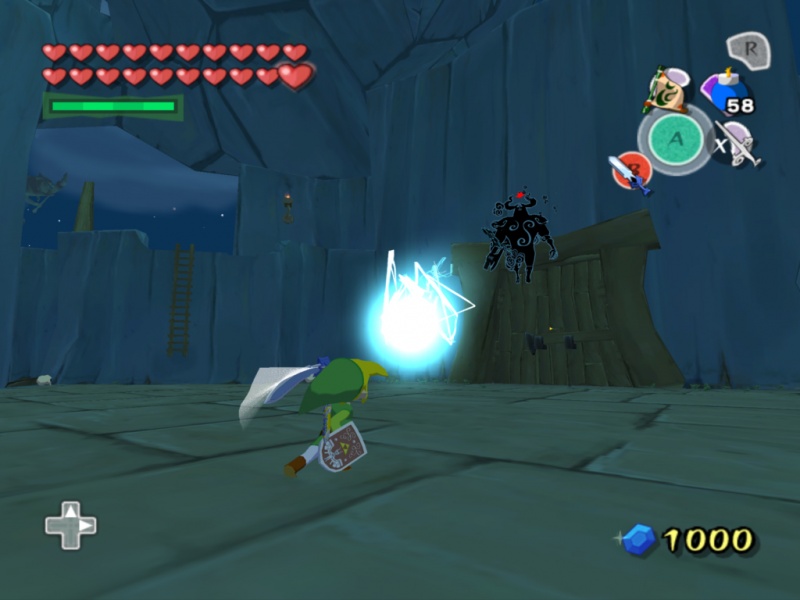 He does appear again much later, in Ganon’s Tower. This time he only takes one hit before vanishing, but he will reappear in every room of a maze, and summons copies of himself as he closes in to slash you. If not that, he will use the usual energy ball, or a new trick. This new attack is a variation of the barrage of shots Ganondorf used in Ocarina of Time that you have to use a spin attack to deflect. Once he is stunned by either sort of energy blast, you can hit him, or just slash the real one as he closes in on you. Either way, he will flee and leave behind his sword. It will fall on its side, and the hilt will tell you which door you should enter. The last room will contain the Light Arrows, which can destroy the phantom in one shot.

One last example to end things. In Phantom Hourglass, we have the Cubus Sisters. At first they pretended to be trapped maidens who you must rescue, but once they are all together they challenge you to a game of Dead Man’s Volley. In fact, they were the ones who coined the term in the first place. In any case, the battle starts with three of the sisters firing lasers that pin you in, while the red one shoots an energy ball. If you manage to deflect it, she will be hurt and the other sisters will stop to look at her in possible concern before they move around and she fires again. After the second hit, the red sister is destroyed. 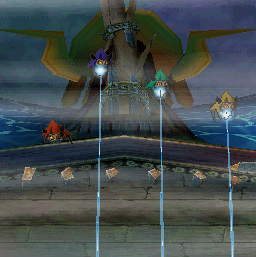 The yellow one will start firing at you instead, mixing in splitting shots like Agahnim used as well. When you deflect an attack, this time the sister will knock it towards the others and they will bounce it among themselves to try and disorient you before one of them fires it back. If you miss it, it will hit the back of the arena and split into smaller shots that can’t be deflected.

The one you hit will fire at you next, and since they all take two hits, this means you’ll be stuck with the three of them a lot longer than otherwise. As they take damage they will start bouncing the ball around more quickly and more often, but once they are down to two they are more predictable. When you are down to one, the last sister will fire out three blasts, only one of which you can deflect, meaning you have to be sure to dodge that and the smaller shots that will be going in all directions. She will also take three hits to beat rather than two, making things a little more difficult.

In any case, that’s all the examples I have, and surely plenty to give a very good idea of the concept behind the Dead Man’s volley and the many variations it has had. I hope you all enjoyed, and I will see you next time.