If you’re a PC gamer you are probably already well aware of the insane amount of software that’s out there available to download.  Truthfully, there are so many games on hand that it’s virtually impossible to even give most of them a test run, for lack of time.  Moreover, it’s becoming increasingly difficult to locate those few titles which truly stand-out from the rest, being able to deliver a unique, entertaining or original type of gameplay. Not to worry though, we’ve rounded up several which will certainly tickle your fancy if you’re in the mood for something amusing and altogether different…

On its face, “Hotline Miami” is a game that hearkens back to the days of the original NES, replete with top-down 2D visuals.  Don’t get the wrong idea though, this game isn’t so much about feel-good nostalgia, instead players awake in each level with a specific set of objectives – usually to eliminate everyone on that particular floor.  While it sounds like a rather boring premise, it is the action (or violence) mired with storytelling that provides the fun here.  Moreover, “Hotline Miami” features a fun 1980’s influenced soundtrack which helps to generate its somewhat chilling atmosphere. 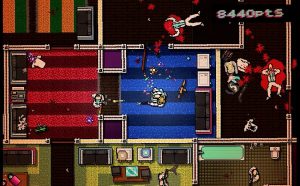 Mark of the Ninja

Yet another intriguing 2D title, this time a side-scroller, “Mark of the Ninja” is an excellent game for those with a taste for stealth-based combat.  In it you assume the role of your typical faceless, nameless assassin where the goal in each level is to sneak through various environments undetected.  Naturally, as a ninja you can also pull off impressive silent kills or confront your enemies head on, but it’s always best to do things silently.  The game itself plays on the themes of light and darkness, with your character attempting to avoid detection throughout.  Perhaps most interestingly, “Mark of the Ninja” utilizes a line-of-sight mechanic which essentially means that you need to carefully time your movements in order to subvert enemy patrols and so forth.  While doing this you can slip behind objects, take to ventilation shafts, etc.  Once detected, enemies will investigate, but if you’re stealthy and cool, they will eventually resume their regular routes.  All in all, this is an excellent platformer which most gamers will enjoy.

Sporting bright, colorful, fantasty-themed graphics and a slightly enhanced type of 2D gameplay, “Bastion” is one of those rare games that incorporate a number of seemingly unrelated facets into its mold successfully.  While the title is most certainly an action role-playing experience, it avoids exposing the player to too many choices, which is something that some gamers might find to be appealing in this age of open-world gaming.  Don’t get the wrong idea though; it’s a highly enjoyable experience, which is certainly evidenced by the 1.7 million copies sold (by March 2013, across all platforms).

Conversely, if open world gaming is really your thing, there’s the wonderfully dark “Don’t Starve”, which combines a vast map to explore with a simple survival mechanic.  For all intents and purposes the goal is to simply ward off hunger as you forage for food, supplies, weapons and other treasures, but there are also plenty of creatures out there who are looking to end your existence as well.  Perhaps the most fulfilling aspect of “Don’t Starve” however is its exploration – which is truly something fascinating to behold.  You’ll likely die again and again until you get the hang of what you’re supposed to do – an effective, if brutal mechanic which only adds to the appeal of the game, in all honesty.

Players who are looking for something different within the strategy genre should look no further than Subset Games’ “FTL: Faster Than Light”.  This real-time, top-down strategy title places you at the helm of a space ship and small crew where the goal is to reach your destination and deliver critical information to an allied fleet.  The cool thing about this game is that it’s requires diligence, planning, and awareness within the context of what amounts to a tabletop board game.  Melding these concepts together, you have to manage every aspect of your ship’s functions as well as recruiting new crew member and upgrading your ship.   Of course throughout it all there are random encounters with hostile forces stretching out across vast tracts of space comprising many different star systems.

When it comes to RTS games (real-time strategy) the “Command & Conquer” series remains one of the most well-known and respected franchises within the genre.  Of all their efforts, C&C: Red Alert 3 is perhaps one of the most noteworthy.  The game essentially places you in an alternate reality where WW2 was fought between allied forces and the Soviet Union.  You can actually take up arms with any of the game’s 3 factions (allies, the soviets, or the empire of the rising sun).  Aside from possessing some decent graphics, the game features all the hallmarks of a great RTS title, including base-building, training and of course, relentless combat.  Moreover, there’s even a co-op element included which allows for both human or A.I. assistance (online or offline, respectively). 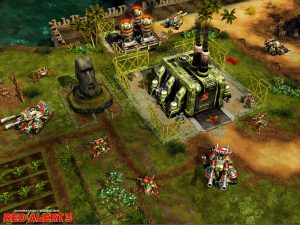 Lastly, we have “The Cave”, which is a charming puzzle-drenched platformer where a mysterious labyrinth lures in players in order to “learn something about themselves and who they might become”.  There are 7 playable characters to choose from, but you must select 3 at the start (and they will stick with you throughout to the end).  While it’s largely a 2D platformer, “The Cave” has a distinctive 3D look and feel about it, thanks to its rather impressive graphics.  Utilizing the abilities of your three characters, you must progress forward, solving all the available “puzzles”.  While it’s supposed to be a single player title, up to 3 players can actually participate (each controlling one character) at the same time via one console, device or PC. 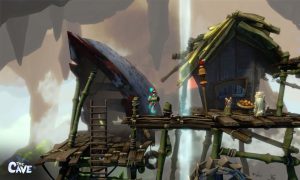