Almost immediately, the first thing you’ll notice about Arc System Works’ “Blazblue: Chrono Phantasma” is its wild, hyperactive visuals.  Seriously, this game is basically analogous to a sugar rush, replete with an energetic soundtrack to provoke your button-mashing bouts.  This is a 2D fighting game that makes allusions to 3D dynamics, effectively generating a sense of depth within a more simplified range.  We’re not talking about a game that shoots for slow, mediocre skirmishing – no, Blazblue: CP is basically a brush with full-on frenzy.

Those who might be looking for the same sort of highly-individualized character storylines found throughout the genre in other titles might be disappointed, however.  Blazblue: Chrono Phantasma replaces your more traditional winding tales of revenge for each fighter with a convergent ending by way of 3 main plots.  Of course, if you’re playing a modern fighting game for the story then you’re probably missing the point a bit.

Nevertheless, if you simply must learn more about the game’s convoluted story, there’s a special feature built-in to help you recap.  Having said that; BlazBlue: CP is pretty innovative in the way it seamlessly blends its rather complex plot with various cut scenes and fighting segments.  What makes this game interesting is the sheer amount of action it packs inside.  As a single player you’ll find loads of content; likewise, when you’re feeling prepared, you can take the fight online.

Hands down, the main draw of this title is its incredible art style and graphics.  Taking on a look that is virtually indistinguishable from intricate hand-drawn anime, each battle is truly something amazing to behold.  Each character features a glut of moves / animations that are at once eye-catching as well as dazzling.  Presentation plays a big role here; even the menus and transitions are interesting and artful, creating a sense of intricacy. Of course this only touches on the action in the foreground, throughout the length of the game you’ll also be treated to some amazing backdrops as well. 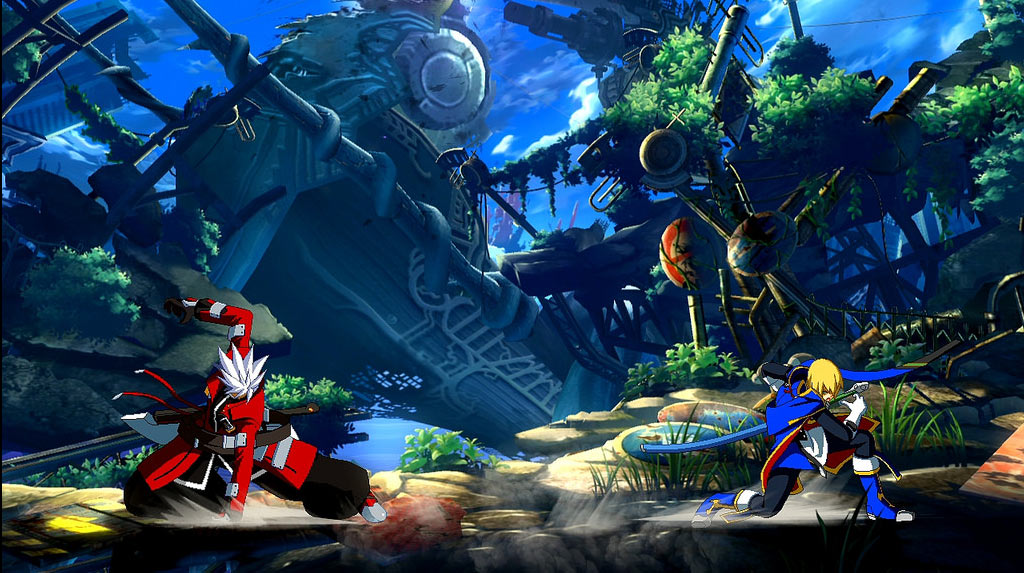 In terms of overall style, one might say that the various landscapes scrolling by in the distance are equal parts fantasy RPG / weird nightmare.  In addition to its visual selling points, Blazblue: Chrono Phantasma also features a solid soundtrack, including updated music.  Even the English voice over story segments are very well done, which makes the story all the more enjoyable.

Don’t let Blazblue: CP fool you though, it can punish you with its difficulty at times, which is what makes it so intriguing.  After encountering your first truly challenging enemy you’ll likely bubble over with rage and frustration, which is what the game wants from you, of course.  Overcoming such adversity is what makes successive encounters so rewarding.