Battlefield 4 is just one short week away! It’s so close yet so far! My impressions took longer to form than I thought they would, which is my way of saying – I was too busy enjoying the beta and may have forgotten to share my insight right away. Still, for anyone reading, it’s not too late to get an early idea of what’s to come and maybe pre-order the game.

The sequel is everything a franchise improvement should be (based on the beta). It didn’t just try to rehash the same things giving off an overwhelming sense of being the same game with a different name. As far as the beta is concerned, it feels like the developers are on the right tract. It kept everything that was great about its predecessor while improving the core gameplay with new and fun features.

There’s a lot of new and amazing features but I’m only going to stick with what I’ve experienced directly with the beta, but as soon as the full game is out you guys can expect to see a full review – that is if I don’t get lost playing the damn thing. Which, if I’m being honest, is more than possible and perhaps that’s just a testament to how much fun I’ve had roving around the battlefield. 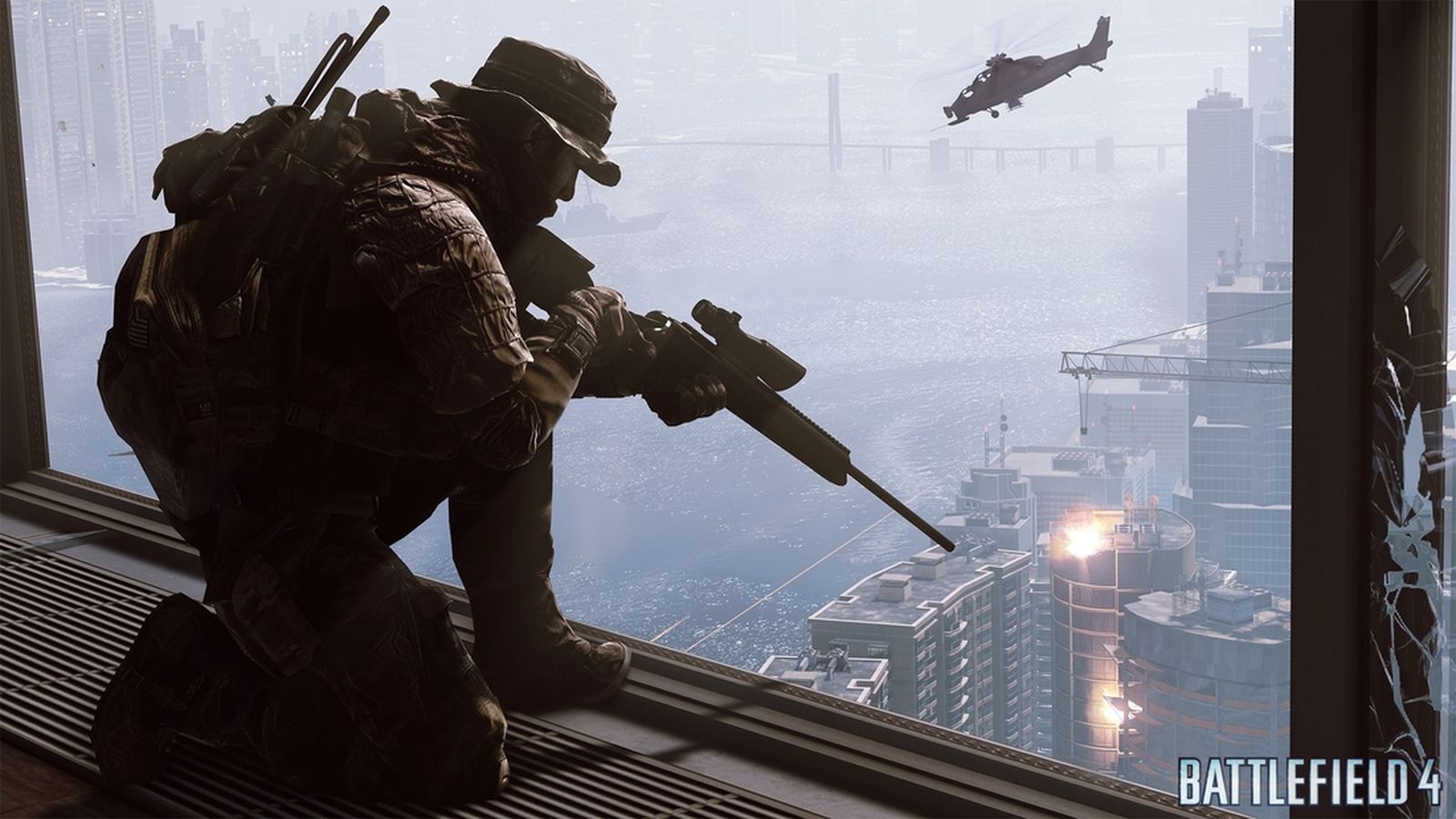 My personal favorite so far is the ability to zero in the sniper scope. What that means is having the option to adjust the player’s zoomed in crosshair for bullet drop – making it easier to hit from a distance. This is something that real world snipers use and makes making that 500m or even that 1000m shot all the more possible.

The PC version does this with a single button key to toggle between the range options. Still, gauging distance could be a problem; luckily for us, the sniper class also comes with a range finder. These tools combine to make the recon class the best it’s ever been – maybe that’s why everyone was using it. That’s not even mentioning the return of C4 to the class. Heck, there didn’t seem to be a game where people weren’t camped out on some roof or another taking shots at me. Luckily, I love counter sniping.

Hopefully the ability to zero is applicable to other classes as well, making long range fighting feasible. I certainly can’t wait to find out. 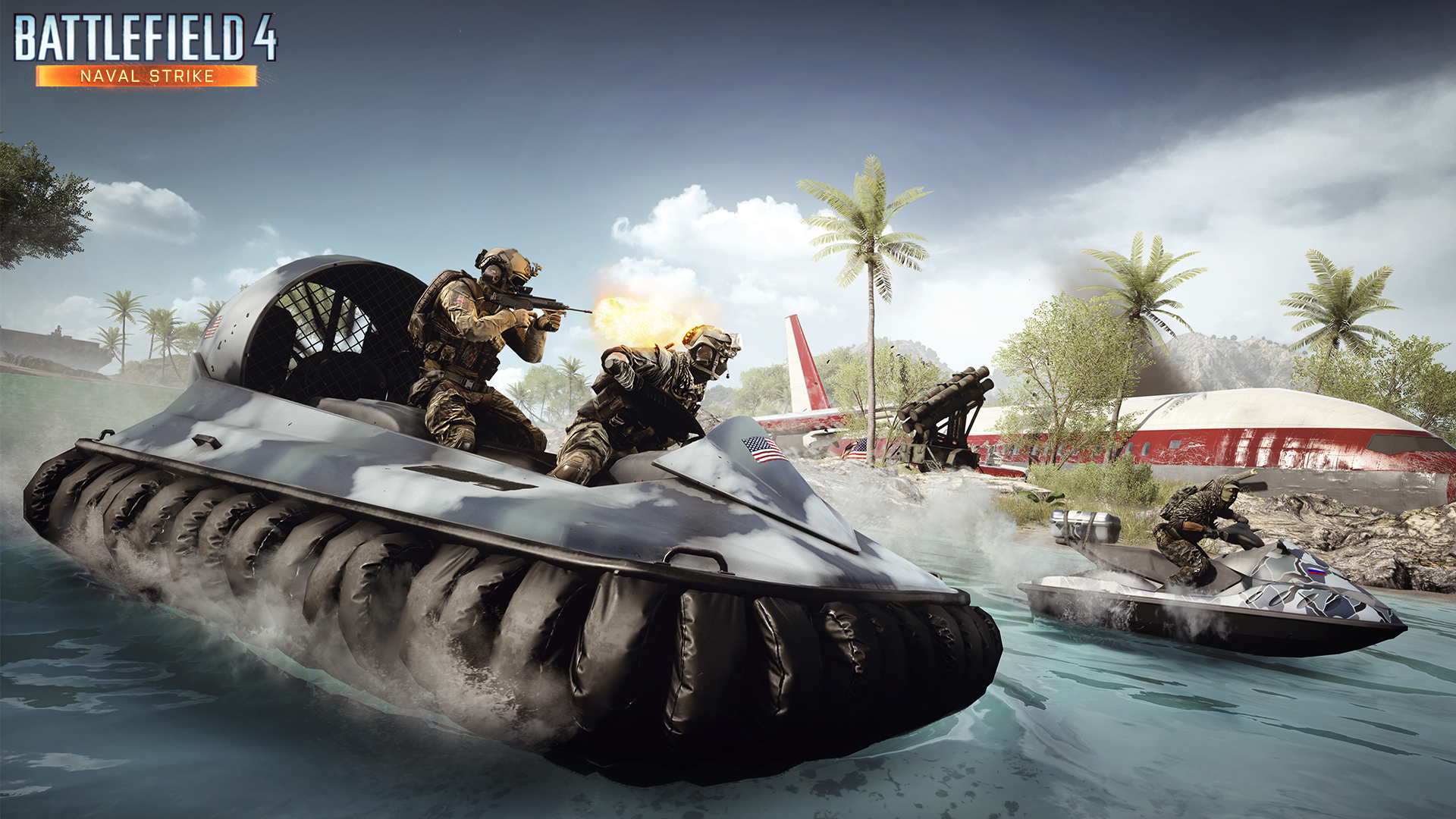 Battlefield 4 is making the most out of the watery environment this time around, going as far as to allow us to knife someone in the water (though the animation isn’t so great the last time I tried). It doesn’t stop there, either. When a player is swimming around, he’ll be lugging around the side arm.

As you can see from the video, we can stop dreaming about underwater as well.

Of course, BF4 wouldn’t be true to the franchise without the vehicles for us to control. We can look forward to joy rides on jet skis and using heavily armed patrol boats to carve a bloody path through the map. Needless to say, it’s sure to bring added depth to an already deep game.

I may not have experienced it but the swells of the waves from other BF 4 videos, certainly seem to be mind boggling and a terribly clever addition. I mean, for the longest time weather has played crucial roles in any battles, it’s only now that we can experience it for ourselves. On that note, I think it’s certainly the most exciting concept to come for the franchise. 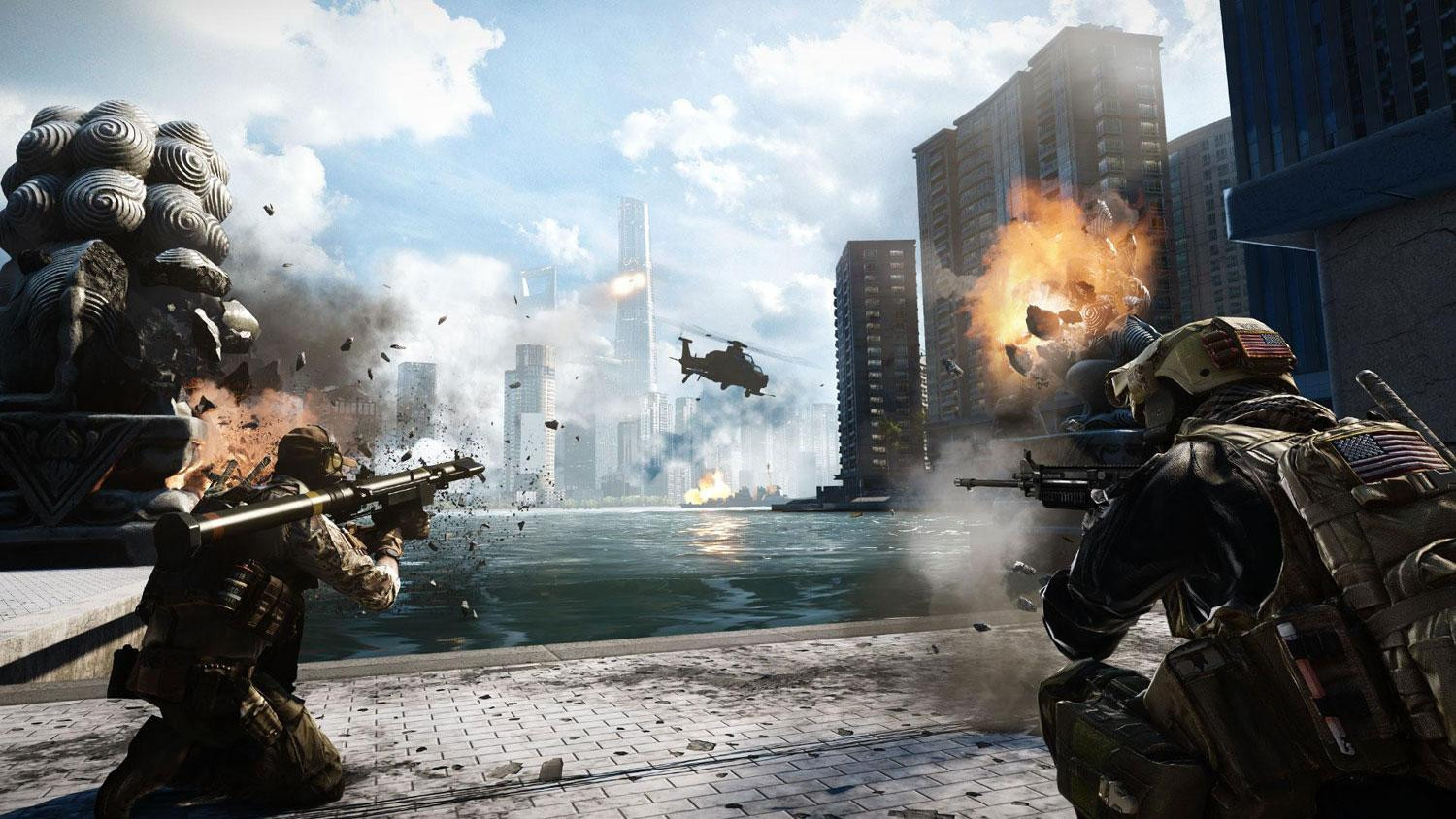 This franchise has always given great incentives for players to use teamwork, BF4 is taking this one step closer. Besides the fact that the squad size has now been increased to handle 5 people, there’s also a new feature called Field Upgrades.

There are five types to choose from, two of which will be class specific. Picking will all come down to the situation. Though unlike everything else that can be equiped, it only activates when doing squad-based work. If a squad performs well enough it may even unlock up to the fourth tier on the upgrade tree.

Its points are easily obtained, completing tasks set by the Squad leader and so on. It also progresses by doing squad-based activities, squad heal, squad resupply and so on. There’s only one tiny little bump in the road, whenever your squad wipes, you lose one tier in the progress bar and getting that back takes time.

All in all, it makes for one convincing argument to stick together and work as a well oiled team. Hopefully it works; we’ll see when the game launches. 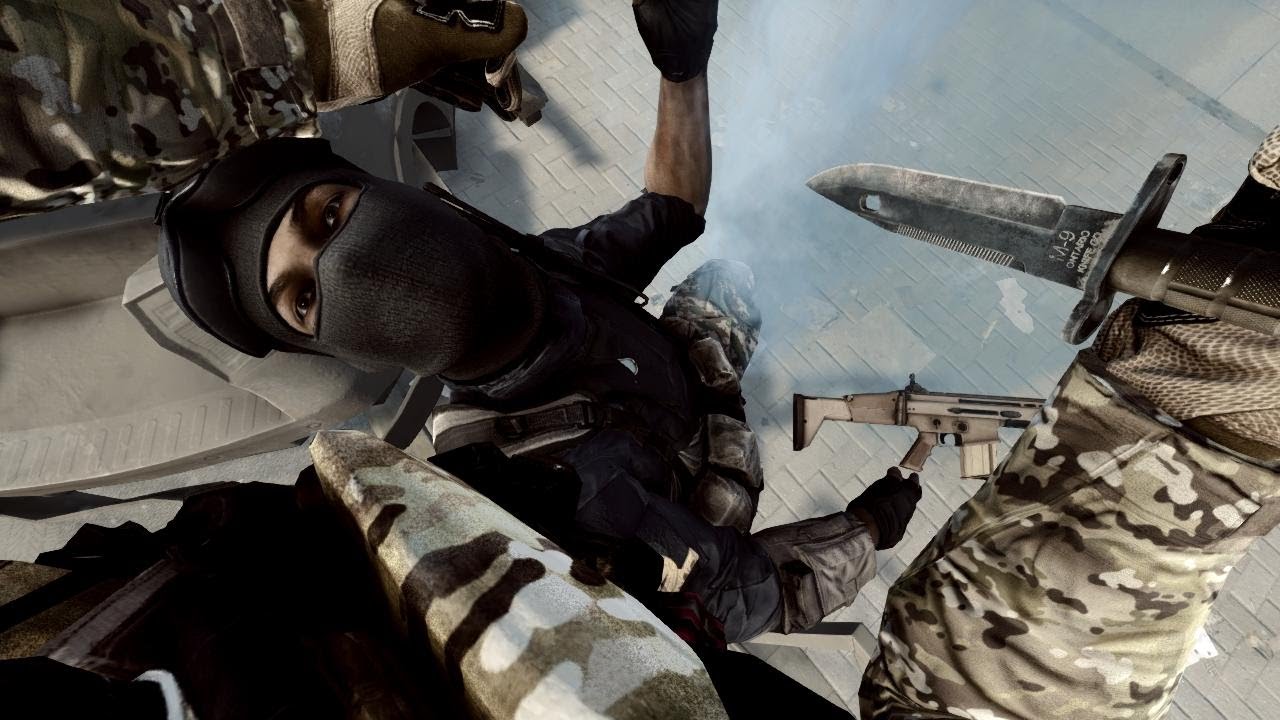 What more needs to be said here? The ability to counter the uncounterable, a knife attack. I remember lying in one direction taking pot shots at the enemy team when suddenly I was jerked up and a knife was coming at me, unfortunately my reaction was too slow. There’s only a second or so to press the button to initiate the counter knife. It may not be much, but it gives the random enemy sneaking behind you a moral dilemma – to knife or not to knife. 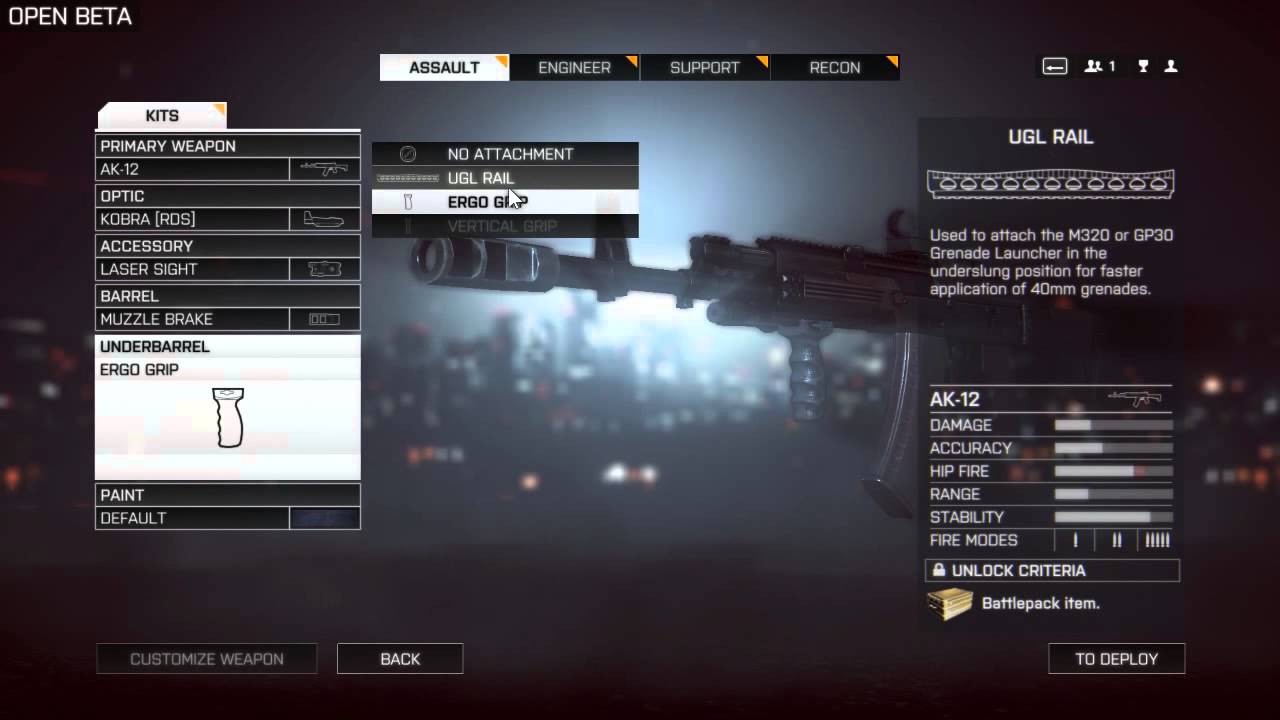 The UI has drastically changed, for the better I might add. Though it does take a little bit of time to get used to it all. After I did, I found customizing my soldier and changing the loadouts on the fly went more smoothly and more importantly a little faster.

The map seems a little complex but after my eyes adjusted, that complexity gives me a lot more information, like where I could spawn at any given time, the ticket count and so on. In short, it displays everything the player needs but keeps it easy to access. This goes for the mini-map, the squad display and the rest of the HUD. 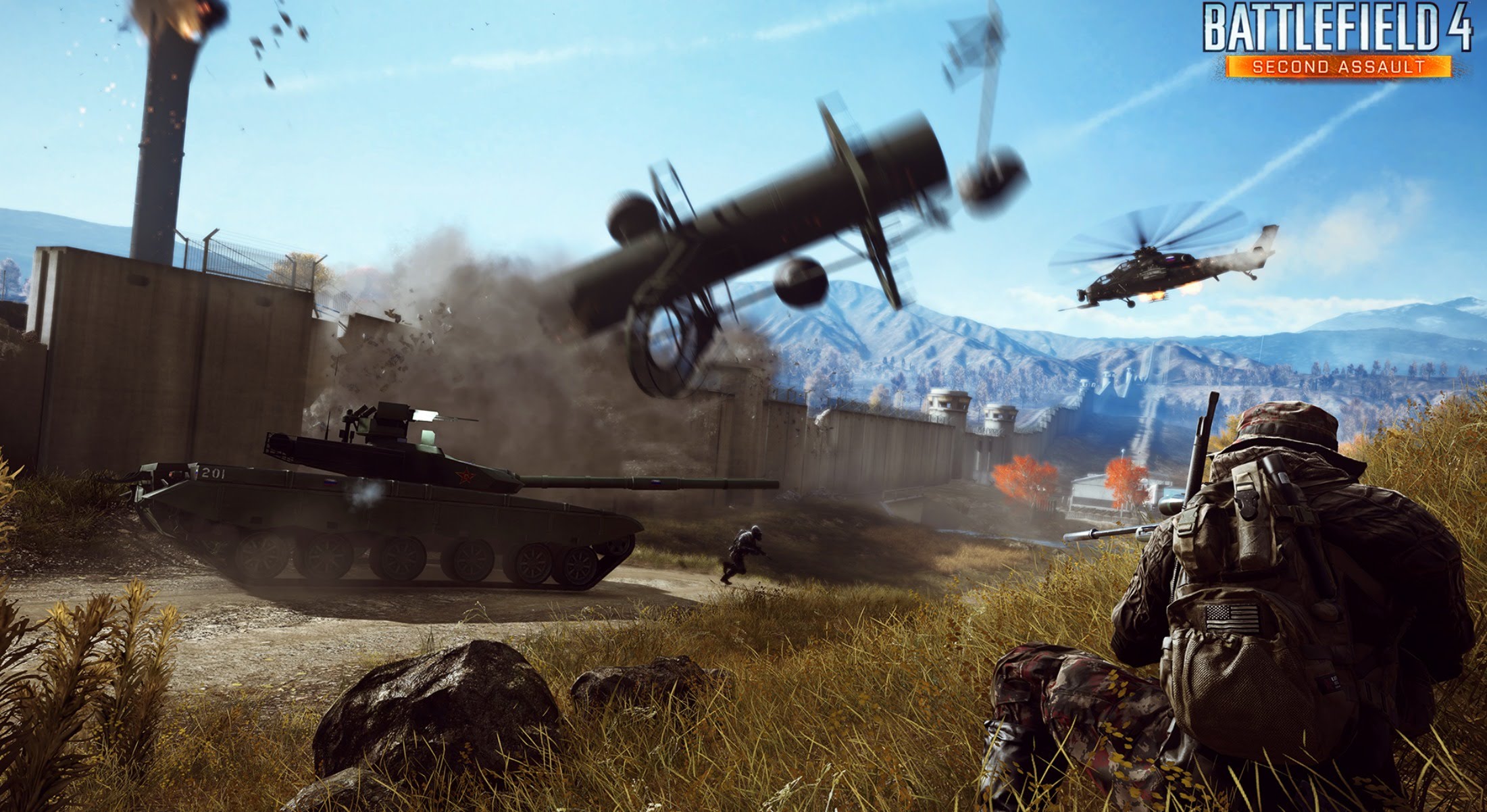 There are no words that I can use to explain how amazingly epic this feature is. It undoubtedly brings the first person shooter genre to the next level. While it can be argued that huge open world maps would be the way to go, being able to affect the environment is much, much more pleasing.

It’s no longer as simple as, need another way in? Make a door. It’s much more than that, being able to blow up supporting pillars and caving in the ground above, destroying tall skyscrapers and bringing it down like a house of cards, gives the player the feeling that he can change the battlefield. Let’s not forget the smaller things too, like taking an elevator up to the roof or activating a heavy roadblock that can apparently stop a tank. True manipulation and hopefully I’ll be able to see much more when I get access to all the maps.

As I think about it, all the little details the developers have worked on seem so simple in realistic terms but in a virtual world, I can’t help but find them appealing in every way. In fact, I think it might just be groundbreaking for the FPS genre. It helps that the action sequences aren’t just set pieces that only used to be found in story mode. The days when dazzling displays unfolded only when the player did this or that are gone. Now more than ever it seems that the multiplayer game modes are becoming more flexible and are introducing more jaw dropping strings of action-hero like sequences. A good example of this was during E3 where the players blew up a supporting pillar causing a tank to crash down an underground level, making it easy pickings. All in all, I think this rather big addition will transform how future FPS games are developed.

What do you guys think about my picks? Comment if you liked it, and let me know what excites you about Battlefield 4.