If you thought Animal Crossing: New Horizons was the most hyped animal-based life-sim coming to the Nintendo Switch, you’ve got another thing coming. Untitled Goose Game (we’re so glad they actually called it that) has finally waddled its way onto Nintendo’s eShop and it is irresistibly charming. Initially greeted by some seriously chilled out main menu music, from the moment I started up the game I was in love. Untitled Goose Game’s vibrant block colours, consistently pleasing cell-shading, playful piano soundtrack, and simple mechanics knit together atmosphere and gameplay into an endlessly endearing package. 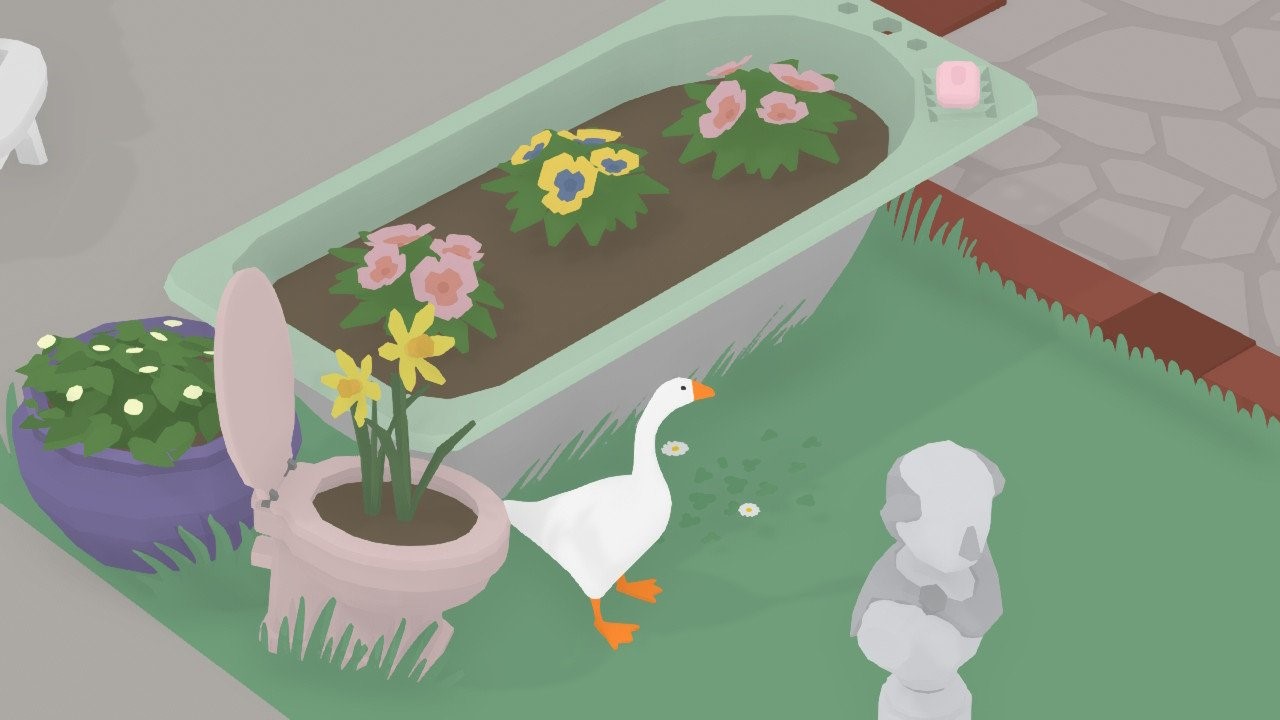 The game opens in a quiet clearing with cell-shaded shrubs and trees, flowers and mushrooms. All is calm and serene. This is followed immediately by a most whimsical and tempting button prompt; “Press Y to honk”. Did we mention you play as a goose?

As you waddle from your hiding place amongst the leaves, you get to grips with the simple, intuitive controls. Move, duck (pun intended), interact/pick up, flap, run, and of course honk. Nothing complicated, nothing finicky, just all the basic actions you could need to wreak havoc on one peaceful, unassuming village. 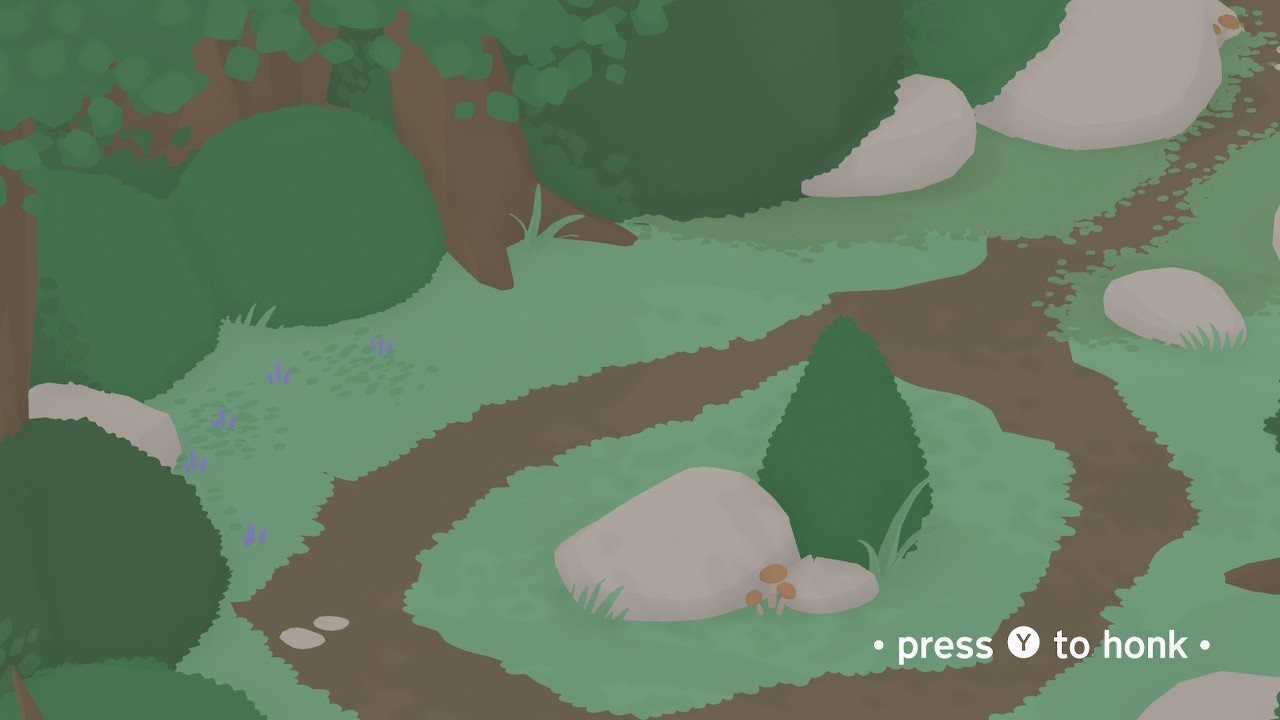 The aim of the game is just that: to use all these actions to disturb the otherwise humble, unobtrusive lives of the villagers. Catch them unawares with a sudden honk, steal their socks, and throw their teacups in the pond – anything to create a ruckus. 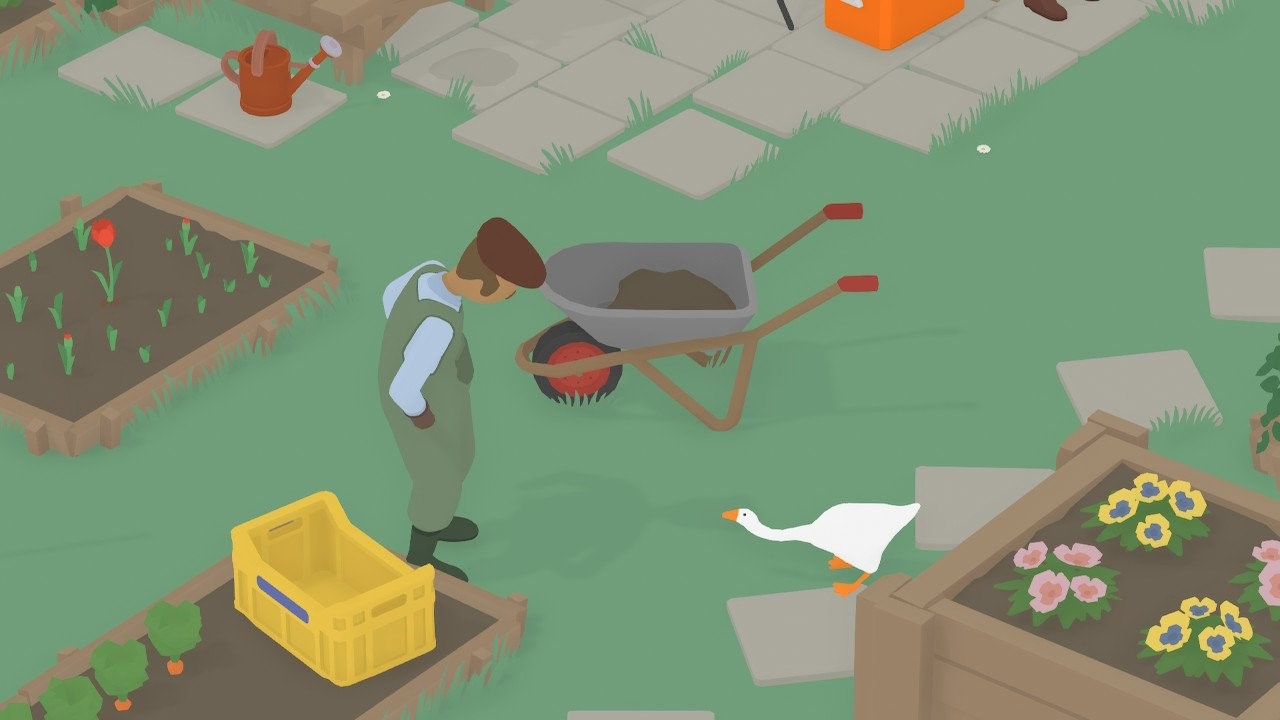 When you’re not leisurely honking at will, bothering the townsfolk and being chased with a priceless vase in your beak, you’ll be looking for ways to cross things off your “To-Do List”.  Each new area presents you with a list of objectives which are completed by solving puzzles of sorts i.e. honking at just the right time to make a gardener hammer his thumb, dragging picnic food onto a blanket to enjoy yourself, or trapping someone inside a phone booth. These challenges vary in difficulty, keeping gameplay lively and driven while remaining inherently playful and sand-boxy. 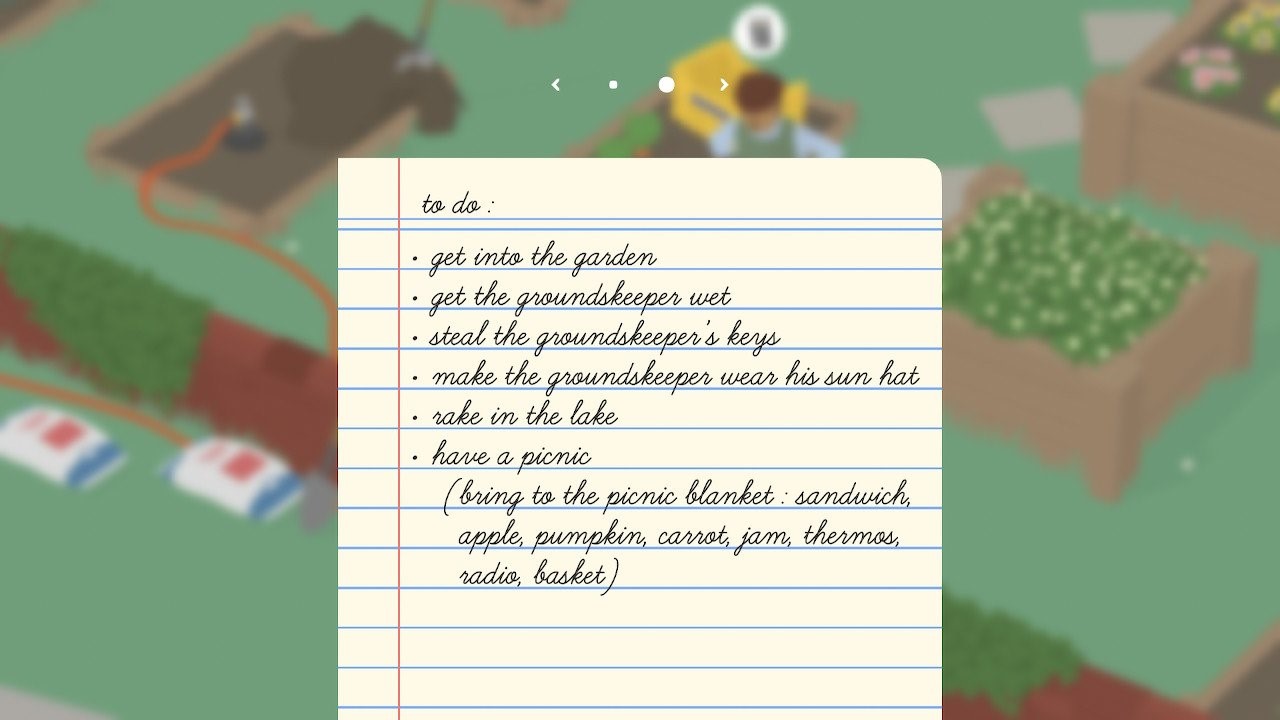 Despite Untitled Goose Game’s cheerful, simplistic exterior, some of these objectives are genuinely tricky. It might take you a while to figure out certain timings or where key objects are hidden around the village. You’ll probably find yourself leaving an area with one or two uncrossed items on your “To-Do List”. No worries there though, you can always go back to an area later if you didn’t quite manage all your mischief on your list. Each part of the village is connected seamlessly to the others with no loading screens between areas. Just pure, uninterrupted avian shenanigans. 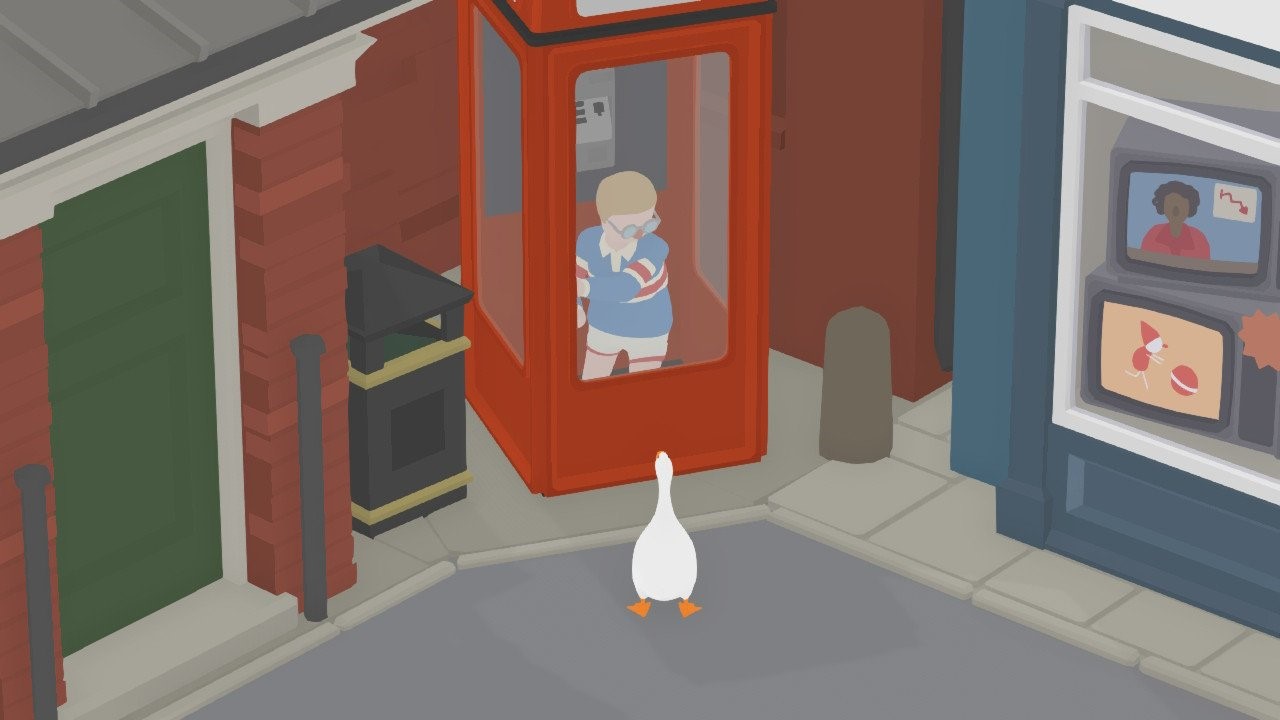 Untitled Goose Game makes excellent use of its soundtrack to create the perfect backdrop for your antics. The piano pipes up at just the right moments, be it during a chase, while you’re sneaking off with someone’s slipper, or just gliding around in the water.

This game also does a really good job of showing you various characters’ personalities through their reactions to you. Every villager reacts to the goose differently. Some are scared of you, some will shoo you away, and some aren’t that bothered at all. It’s small yet effective details like this, the goose’s delightful little waddle, and tail-wagging idle animations that really polish off this gorgeous title and make it shine. 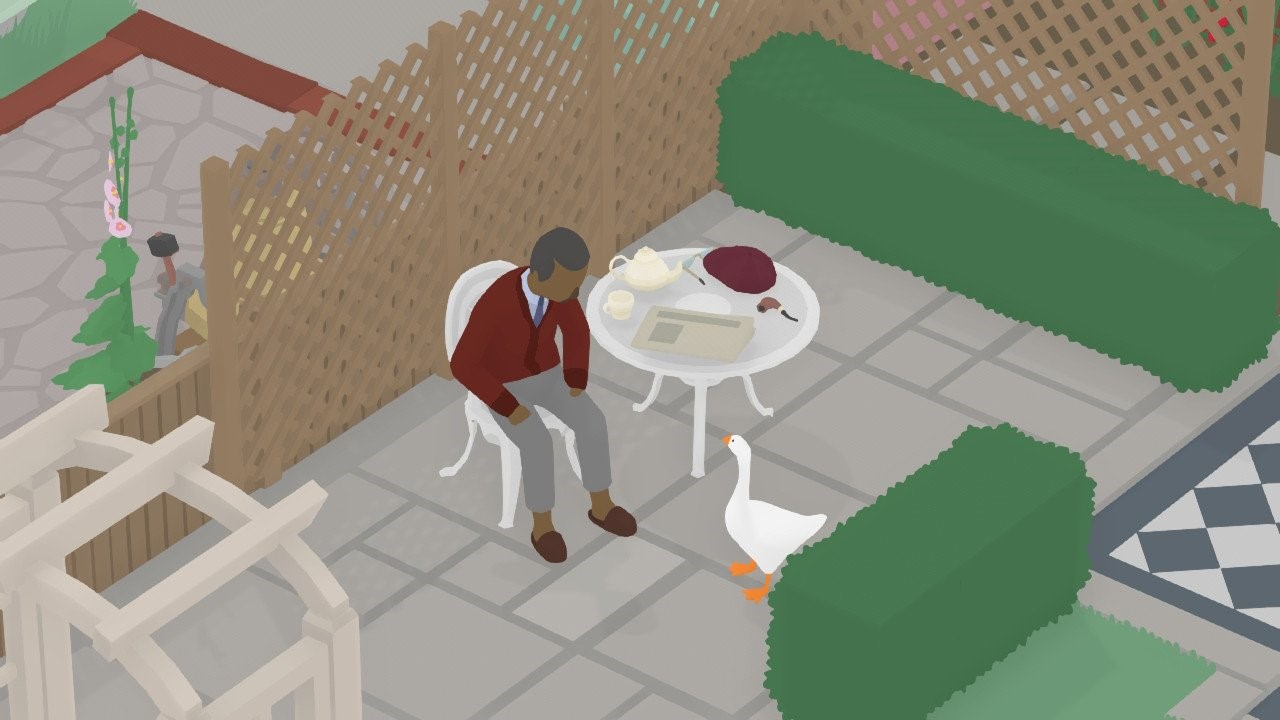 With its quirky, cute capers, a lovely soundtrack that reacts to your escapades, intriguing puzzle-solving gameplay and general japes, Untitled Goose Game is up there as one of the best indie titles you can get on Switch right now. On par with its predecessor Firewatch, and other indie titles like Donut County or Rime, it’s short, but irrefutably sweet. Happy honking!