What’s the most dangerous job you can think of? Several should spring to mind if you’re of the same nervous disposition as many of us here. Some of them might seem a tad unconventional – logging work, construction, and truck driving can all be extremely dangerous vocations – but there are always the classic jobs like mountain guide and stuntman. Whichever one you’re thinking of, you’re probably thankful that your job doesn’t entail such risks (unless it does, of course).

Experiencing jobs that could potentially harm or kill you is the premise of video games; that’s mostly what they’re there for. Video games can allow us to be soldiers, snowboarders and rough-water sailors right from the comfort of our couch. Whatever you want to do that entails potential physical harm, you can guarantee there’s a game out there somewhere for you. There’s even a game for those who want to play as a rodeo-ridin’ savannah-travellin’ cowboy with a zoo business on the side. It’s called Rodeo Stampede: Savannah and you can play it right here. 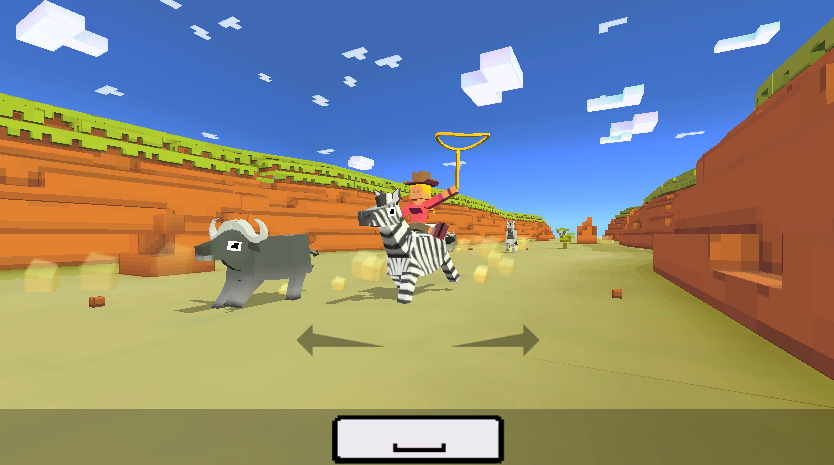 Let’s back up a little and explain the core concepts behind Rodeo Stampede: Savannah. At its core, the game’s DNA actually resembles something like Frogger. The main gameplay sees players dashing through a herd of stampeding animals (which for some reason here consists of many different species) and claiming new and interesting ones for their floating sky zoo, more on which later. To accomplish this, the player simply has a lasso rope and their wits. Animals are kind enough to stampede within jumping distance, you see, and jumping is most of everything you’re going to do in this game.

The core concepts in Rodeo Stampede are very cleverly implemented and work extremely well. You’ll start off leaping onto the back of a bull or wildebeest or somesuch, which will then transport you a certain amount of the way through a level. Eventually, said animal will start to get bored of you and threaten to throw you off. At this point, you’ll need to leap from that animal and find another one to hijack, repeating the process again until that animal grows tired of you. Jumping from animal to animal in order to make progress thus becomes the core mechanic, and crucially it’s hilarious fun to do so. 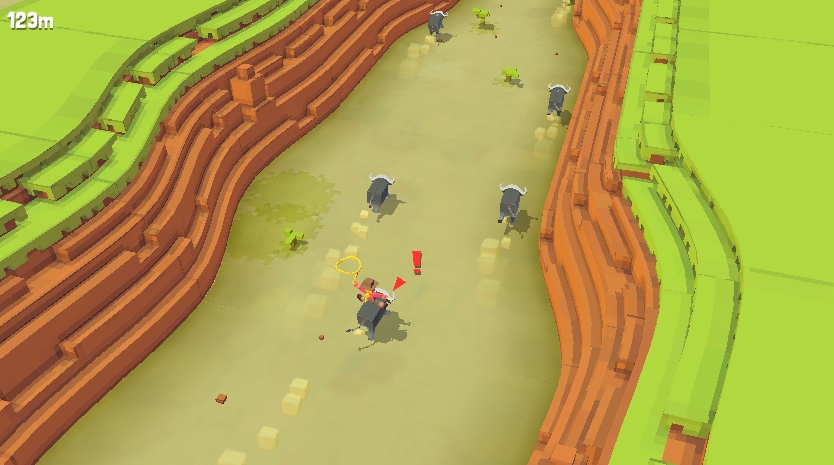 That’s not to say there’s no skill involved, of course. Controls are nice and simple – arrow keys to move, space bar to jump – but you’ll still need to consider the timing and angle of your jump if you’re going to make it to the next stampeding animal. The punishment for failure is fairly harsh, since if you fall while jumping you’ll simply faceplant and it’s back to the zoo for you. In this way, the game is a sequence of mini-skill tests, each of which is examining your ability to make snap judgements and your reflexes as you jump from animal to animal. This all feels fluid and compelling to play, mostly because of the excellent animations, which render each jump a marvel and each landing a satsifying “thud”, but also because of the tight core controls.

Nothing about Rodeo Stampede: Savannah feels slapdash or sloppy. Everything is tightly controlled and implemented here, with no room for error on the game’s part. Every time we fell from our animal and had to restart the level, we knew it was our fault; we understood completely where we’d gone wrong and how we needed to go about the challenge next time. In this way, Rodeo Stampede never becomes frustrating, even as it ramps the difficulty up pretty significantly in the later stages. You will receive help in the form of upgrades and new skills from the zoo portion of the game if you’re struggling, but you’ll probably just want to go back into the game and try again. 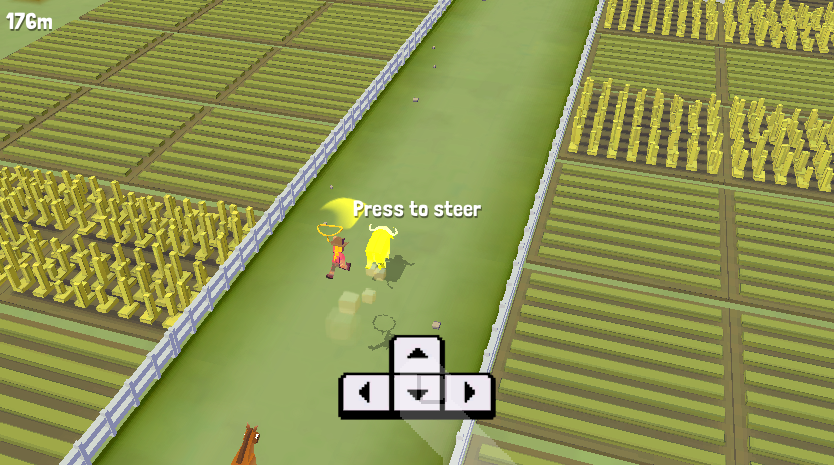 That zoo portion makes up the second half of the game, but the proportions aren’t quite that simple. Really, the core rodeo-style gameplay is probably around 80% of the overall package, with the remaining zoo part around 20%. You won’t actually need to manage the zoo – there’s no placing of fast-food concessions, no keeping the customers happy. Instead, you’ll simply collect revenue they generate as they come to see the animals you capture. Each racing stage ends when you’ve captured a new animal, which you then return to your zoo to place in an enclosure. Said enclosures can be upgraded, granting you new skills and boons when you’re capturing new animals or more of the same species (which need to be mounted in order to traverse levels).

The best thing about Rodeo Stampede: Savannah is that it just works. There’s nothing here that feels out of place or extraneous. Everything fits together perfectly to create a holistic package that always feels like it’s doing everything it can to make the player have fun. Riding wildebeest in real life might be a dangerous pastime, but in Rodeo Stampede: Savannah it’s never felt more fun.