Data security is an incredibly hot-button issue right now. In 2020 alone, several gaming studios had their data stolen or hacked by ransomware groups, including Cyberpunk 2077 developer CD Projekt Red and legendary Watch Dogs and Assassin’s Creed developer Ubisoft. It stands to reason that if you’re scared about the integrity of your data, you have every right to be. Although as an individual you’re almost certainly not as susceptible to data being stolen as major companies are, that doesn’t mean it isn’t possible, and if you’re working with sensitive information then you have all the more reason to be cautious.

That’s where companies like the UK-based iStorage come in. iStorage provides incredibly secure storage solutions to individuals and companies looking to protect their data. The company offers the full gamut of storage solutions, from USB flash drives all the way through to huge SSDs with massive storage capacities. The diskAshur M2 is a solid-state drive with five different capacities ranging from 120GB all the way through to 2TB. It’s rare to see a storage solution company offering smaller capacities, and though it’s welcome, the 1TB drive is likely where most customers will find the greatest value for money.

If you’re looking for a casual drive that’s just going to hold a few pictures and maybe some work documents, this may not be the drive for you. The M2 is incredibly robust, and while it’s not bulky at all, it’s certainly not the kind of drive you simply grab and plug into a PC or a gaming console. Make no mistake: the diskAshur M2 is the storage solution for you if you’re security-conscious, but it’s a pricey, heavyweight option that isn’t designed for the casual user. You should already know if this is the drive for you based on that assessment, but even if you are worried about your data being stolen, there are plenty of options out there. What makes the M2 stand out?

For a start, there’s an incredible emphasis here on security. While many of the M2’s competitors offer secure storage solutions, it feels like iStorage has gone the extra mile here. The construction is as premium as it gets, all brushed metal and hard-wearing rubber, which you’d expect from a drive that’s all about keeping your data safe and sound. Naturally, there’s an IP68 waterproof and dustproof rating, so if you do accidentally spill something on your M2, you won’t need to worry about it causing any kind of lasting damage (unless you’re submerging it in water for extended periods of time, but that wouldn’t be smart). 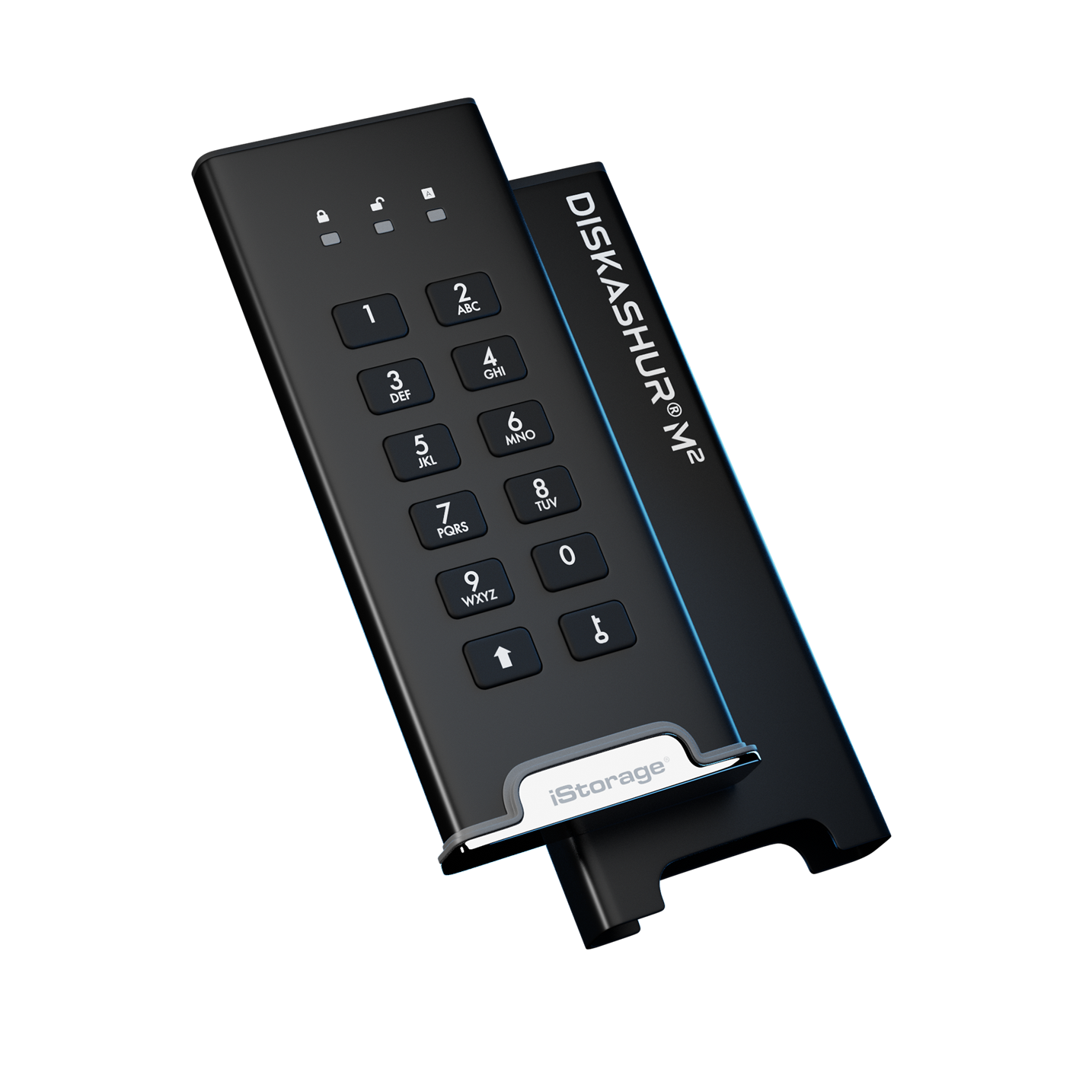 One huge selling point in the M2’s favour is that it doesn’t require software to make its encryption work. It comes complete with a hard-wearing keypad that allows you to input a PIN without needing to install any kind of software on your PC. This means that you could technically use it with games consoles as well, although if you’re buying something this ridiculously powerful in the security department just to keep your Call of Duty install safe, you might be punching above the weight you really need. Still, the software-free functionality is very nice, especially for those who don’t have a lot of technical know-how and just want a drive that keeps their stuff safe.

So, how does it actually work? The diskAshur M2 SSD has AES-XTS 256-bit encryption, which makes it pretty hard for anyone to crack the device. There’s a lot of technical jargon that goes into explaining the functionality behind this protection protocol, so suffice it to say that your everyday garden-variety hacker isn’t going to be able to crack this drive without the physical password. To that end, the M2 also offers administrative functions so that an admin can set a master password and then delegate several user passwords, so if you need the drive to travel with an employee, for example, this feature comes in handy for that.

Using the device is extremely straightforward. You can set up and use your PIN without installing software, so if you don’t have much technical savvy, you’ll be fine with the diskAshur M2. When you do want to retrieve or access your files, simply plug in the drive with one of the included USB cables (it comes complete with a Type-A and Type-C cable, although the fitting on the drive itself is Micro USB), enter your PIN, and you’re good to go. Should you happen to forget your PIN, the M2 also has some pretty excellent recovery features to enable you to grab your data without compromising on security. This is a device that knows its audience and plays to them well.

How does the M2 perform as a solid-state drive? Given that speed and convenience aren’t really the priorities of the M2, the performance here is…fine. It’s no better or worse than most commercially available SSDs, which, given the extra security on display, is impressive in and of itself. However, you’re not getting lightning speeds here. We noticed it was just a little slower than some of the higher-end SSDs at comparable price points, and although the security more than makes up for that issue, you won’t want to invest in an M2 if speed is your one and only priority. Then again, if speed is all you care about, there’s no reason to be looking into such a security-focused SSD anyway.

There’s also plenty here to get excited about if you’re worried about your drive being physically stolen. When you unplug the drive from the host PC or turn off power to the USB port into which it’s plugged in, it’ll automatically lock. You can also set a self-destruct PIN which you can input to permanently destroy everything on the drive. As you can imagine, that’s not a feature you’ll want to take advantage of lightly; when iStorage says it’s gone, it’s really gone, so you absolutely won’t be able to recover it if you invoke this nuclear option. Still, it’s nice to know that the option is there should you need it.

It’s hard to fault the diskAshur M2 SSD for what it is and what it does. We could complain about how there’s a Micro USB fitting, which feels somewhat at odds with the major push being made towards USB-C nowadays. The price is likely to be very hefty, which is almost certainly going to put off all but the most security-conscious. However, the former is more of a nitpick and the latter feels like exactly what iStorage wants; this is not a drive intended for casual use, but one for those who have one thing in mind when it comes to data storage. The Micro USB connection is a bit of a shame, but it’s hardly a deal-breaker.

So, all in all, should you pick up a diskAshur M2 SSD? That depends. For a start, we wouldn’t recommend starting with anything other than the 1TB model, as an SSD with a lower capacity almost feels like a pointless investment. If you don’t consider security to be of paramount importance when you’re choosing your storage solutions, then you can absolutely feel good about parting ways with the M2, as it won’t provide the same functionality as other SSDs of its price point.

However, it’s a robust, hard-wearing storage solution that will keep your data extremely safe and doesn’t compromise on any of the important features in its class. As such, we’d recommend it as a purchase to anyone who needs to keep data safe and doesn’t want prying eyes or hands to access it. Gamers don’t need to apply, because this isn’t an ordinary SSD; it’s hard to imagine plugging it into your PS5 and needing to input the PIN every time you want to play. For those to whom the M2 is relevant, it’s an excellent choice.