How To Broadcast On Twitch

Here’s a sobering fact for you. Depending on how ads work within Twitch streams, it’s possible for a streamer to make between $1000 and $10,000 an hour. For many people, that will be a completely unattainable amount of money, and yet there are those who complain that Twitch streaming “looks like an easy job” and that “anyone could do it”. Are these statements true? Well…yes and no, of course. There are fewer barriers to entry for Twitch than for many other jobs, but it is naturally not easy to become a Twitch streamer. Here’s what you need to broadcast on Twitch.

Quick note: the following assumes you’re wanting to stream on PC. If you want to give it a go on Xbox One or PS4, you’ll find that many of these tools are taken care of. PC streaming is a little more complicated, though.

You won’t get very far unless you create an account for broadcasting on Twitch. The process for doing so is pretty painless; all you need to do is head over to the main Twitch page and hit “Sign Up”. There’s no difference between a viewer account and a streamer account, so you don’t need to specify anything when you sign up; just creating an account is enough. 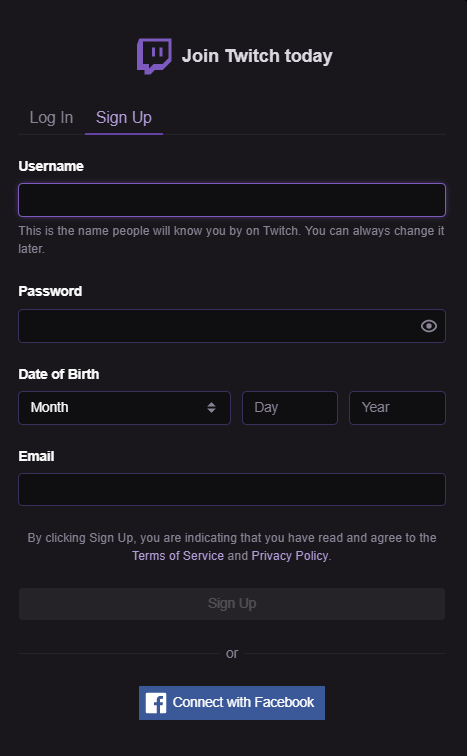 It’s important to pick a good name and identity for yourself. Most famous Twitch streamers have a clear, obvious idea of who their audience is and who they’re aiming at. Before you start, think about your branding. Who are you? What kind of games do you want to play? Who do you want to aim your content at? All of these questions will help you refine your content and grab an audience.

If you want to record and broadcast your gameplay on Twitch, you’re going to want a decent PC. Your laptop might be fine for basic day-to-day office tasks or browsing the internet, but gaming is a significantly more intensive process and needs more power. Throw in live-casting that gameplay to a streaming service and you’re increasing the load on your equipment by a significant degree.

A good gaming PC for Twitch will have at least 8GB of RAM. 16 to 32GB is desirable, but you can get by with 8GB. You’ll also want at the very least a powerful Intel Core i5 processor; i3 is fine for basic tasks, but i5 (at least 4670 or the AMD equivalent) is necessary for Twitch. Finally, your graphics card is crucial. A high memory total and powerful clock on the card is vital for Twitch streaming.

An average connection is about 5MB per second or more in terms of upload speeds – the bigger the better, you’ll possibly get by on just 3MB per second if your resolution settings are limited. Downloads don’t matter as much, since you won’t actually be receiving too much data, unless you’re streaming an online game. The faster you can get the smoother the experience will be thus, you may want to consider upgrading before you establish yourself on Twitch.

Without streaming software, there’s nothing for you to broadcast on Twitch. The most popular – and best, in our opinion – streaming software right now is the free OBS, which stands for Open Broadcaster Software. OBS is relatively painless to use, and since it’s completely free you can download it and use it on as many machines as you need to. The other option is XSplit, which has a paid tier but is also solid.

Once you’ve set up OBS for streaming, you also need to make sure you’re meeting the minimum broadcast requirements as outlined by Twitch itself. OBS actually has a built-in preset for Twitch, so you shouldn’t have to worry too much about the technical details. If, for some reason, you can’t access this preset, Twitch’s guidelines should see you through OK.

Technically, it’s entirely possible to stream on Twitch without a microphone or camera; all you actually need is the game and the streaming software (and a Twitch account, naturally). If you don’t have a mic or a camera, though,

you probably won’t maintain very good interaction with your audience since you won’t actually have a presence outside the game. Some people like this, but it’s not massively popular as a style.

As such, you’ll want a decent microphone. It doesn’t have to cost the earth; many mics that are perfectly fine for Twitch are actually quite cheap, and although you’ll get better quality the more you shell out for (generally), you’ll do just fine in the early days with a small 3.5mm mic and no extra hardware. As you gain followers, you may want to look into a more professional audio setup.

This is how people are going to be able to see your face. If you don’t want a facecam, then you really don’t need

to invest in a camera. Additionally, if you’re using a gaming laptop, many of these will already come with webcams built in (although they probably won’t offer quality comparable to those you can buy). Think about whether you definitely want a camera.

If you do, then you will find plenty of options out there at plenty of price points. You’re looking for something that will film you in HD at a reasonable frame rate and that won’t kick out on you when you most need it. If you’re prone to raging at your games, you may also want to factor in build quality. Investing in a decent camera means you won’t have to replace your equipment later down the line.

Lost Ark is an impossibly massive game full of content. With 7 continents separated by vast seas, each one containing a bounty of NPCs...
Read more
Editorials

Twitch has become one of the most popular streaming sites for amateur and professional streamers, particularly gamers who continuously broadcast while playing games such...
Read more
Editor's Picks

So, you’ve assembled your brand new shiny gaming PC, and now you’re wondering what to do with it. This can be a surprisingly common...
Read more